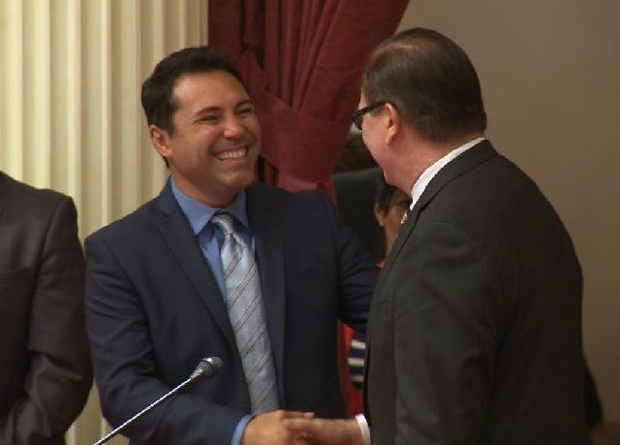 A 41-year-old 10-time world champion and Olympic gold medalist who was inducted into the International Boxing Hall of Fame earlier this month, De la Hoya (39-6, 30 knockouts) was honored during a special ceremony.

"I am pleased to join my colleagues in honoring Oscar De la Hoya for his many contributions to the sport of boxing and for being a strong example of what can happen when one works hard to succeed, regardless of their background," said Perez. "We are proud to celebrate his accomplishments, especially his recent induction into the International Boxing Hall of Fame, as well as an athlete, businessman, community leader, Latino and Californian."

Known as the "Golden Boy," De la Hoya was born to Mexican immigrants in Montebello, Calif., began boxing at the age of six and won an Olympic gold medal as a 17-year-old in 1992.

As a professional, De la Hoya won 10 titles over six different weight classes and was inducted into the International Boxing Hall of Fame on June 8 in Canastota, N.Y., as part of a class that included rival Felix "Tito" Trinidad and super middleweight champion Joe Calzaghe, who retired undefeated.

"I'm honored to receive this recognition in my home state of California," said De la Hoya. "I'm proud to represent my hometown of East Los Angeles today. I wouldn't be standing here without the continued support of my family, friends, mentors and amazing fans."

De la Hoya established Los Angeles-based Golden Boy Promotions in 2002, becoming the first Hispanic to own a national boxing promotional company. In 2000, he released his first album in English and Spanish, which topped Latin dance charts and had a single, "Ven a Mi," that was nominated for a Grammy Award.

"Oscar De la Hoya is an incredible athlete who has never forgotten where he came from," said De León. "He has given back so much to the community in East Los Angeles and his continued success following his athletic career serves as an inspiration for all Californians."