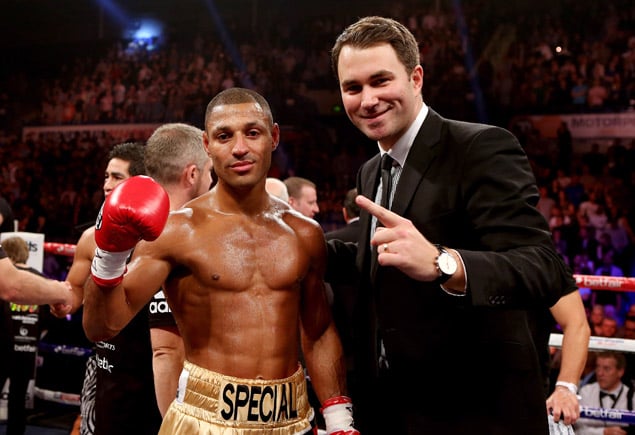 Kell Brook's promoter Eddie Hearn of Matchroom Sport spoke to RingTV.com regarding the potential date of a planned match against IBF welterweight titleholder Shawn Porter as well as the importance of random drug testing during a Tuesday interview.

The 28-year-old Brook (32-0, 22 knockouts) will be after his fifth consecutive stoppage win if he faces Porter (24-0-1, 15 KOs), 26, who is coming off a fourth round stoppage of two-division titlist Paulie Malignaggi in April that followed Porter's unanimous decision over Devon Alexander for the belt in December.

Hearn said Brook already has signed to face Porter, whose father and trainer, Kenny Porter has indicated his son will sign soon.

The following are some of Hearn's thoughts about Porter vs. Brook.

Eddie Hearn on the potential date of the fight:

"Now they're talking about Sept. 6 or Sept. 16, so I really don't know. I'm hoping by the end of the day on Wednesday that they would know. I don't really care where the fight takes place. Within the contract, the fight has to happen before Sept. 10.

On the location of the fight:

"It's probably more beneficial that the fight take place on the East Coast, really, due to the time difference. I'm sure that Kell would like to fight in Los Angeles or Las Vegas. I'm guessing that among the options are Los Angeles or New York or probably Atlantic City.

"Kell's boxed in Atlantic City before but we'll fight anywhere. Doesn't matter. Don't care. Recently, Kell's been in Big Bear; he's been in Las Vegas training and he's been in Los Angeles training. So he's familiar with everywhere in America.

"I'm not going to go into the deal but we got a great deal and there were a lot of things that were important to us to get and one of them was random drug testing. That's not a reflection on Shawn Porter; that's just my position in terms of the sport at this level.

"Obviously, it's important to me to maintain the integrity of the sport. It's written into the contract. But, again, it's not a reflection on Shawn Porter but more a reflection of what I believe.

"You're not talking about soccer or other athletics, where you might be able to use and run a little bit faster. We're talking about a sport where the aim is to go in and to hurt another man.

"So, if the sport of boxing doesn't get on top of drug testing, then someone is going to get badly hurt. This is not a sport where you can treat that as a joke. People are definitely using and I think that we can agree on that.

On Brook's past, and future:

"About two years ago, we got offered the fight with Tim Bradley and I was surprised but the money wasn't great and so we had a lot of options and that was just before we had the fight with [Hector David] Saldivia [a third round stoppage in October 2012].

"So we turned down Bradley because the Saldivia fight was the one that made us the mandatory challenger in the IBF. But we always thought we had to become the mandatory to get the fights that we wanted.

"Kell Brook will win a world title and when he does, he will be in charge of his own destiny. When he wins the IBF title from Shawn Porter, he will have all of the options in the world to go out and fight whomever he wishes.

"It's premature to talk about Floyd Mayweather but obviously, we know that there are some massive fights out there at 147. So Kell wants to beat Shawn Porter and Kell wants the big fights."

Also on the Golovkin-Geale card will be bouts between junior middleweights Glen Tapia and Boyd Melson and heavyweights Mike Perez and Bryant Jennings in a WBC eliminator bout.

ROD SALKA ON DANNY GARCIA: 'NOBODY EXPECTS ME TO WIN'

Rod Salka knows what the world is thinking as the unheralded fighter rises to the challege against RING junior welterweight champion Danny Garcia at Barclays Center on Aug. 9.

But during a Tuesday interview with RingTV.com, Salka spoke from the experience of having once faced Garcia and, in his mind, beaten him, even though they were teen amateurs.

"I fought him once in the Golden Gloves finals and that was right before I turned pro. He was number one in the country at the time and I thought that I beat him then and he got that decision. It was either in 2006 or 2007 and I turned pro in the summer of 2007. But obviously, nobody expects me to win against Danny Garcia and I'm fine with that," said Salka.

In his last fight in April, Salka (19-3, 3 knockouts), dropped previously unbeaeten Alexei Collado with a third round left hook on the way to an upset unanimous decision victory before his own fans at the Convention Center in Monroeville, Pa.

Salka won by scores of 96-94 and 96-93 (twice) over Collado, after having previously been in the ring in December for a disputed majority decision loss at junior welterweight to Ricardo Alvarez, the older brother of Mexican star Saul Alvarez.

Salka hopes to employ similar tactics against Garcia as those used by Herrera.

"I think that Herrera did a great job. He was in and out; he smothered him on a lot of his counters and I feel as if I can do a lot of the same stuff. I feel like I'm even more energetic and that maybe I'm even a little bit faster," said Salka.

"I don't know what Herrera's punching power was like and it's not like I'm knocking people out left and right. But I'm starting to sit down on my punches more every now and then and I'm still boxing and using lateral movement, being in and out sometimes. My counter game is pretty good and my counter works well off of my jab."

In the end, Salka doesn't care what anyone thinks will transpire on Aug. 9, He's just ready to fight.

"I don't care what they're reasoning is for taking this fight. All that I know is that they sent me a contract; I signed it and I'm fighting Danny Garcia," said Salka.

"They can have whatever reason that they want to have for doing it. All I know is that I'm in camp right now and I'm training and I'm ready to go. I'm going to be the best that I've ever been on Aug. 9."

Former heavyweight titleholder Shannon Briggs will be after his fourth straight win with as many knockouts against Raphael Zumbano Love on Saturday at Remington Park in Oklahoma City.

Briggs (54-6-1, 48 knockouts), 42, suffered his last loss by unanimous decision to since-retired WBC titleholder Vitali Klitschko in October 2010 and was last in action for a first-round stoppage of Matthew Greer in May.

No U.S.-born fighter has held a heavyweight title since 2007 when Briggs briefly wore the WBO’s strap following a 12th-round technical knockout of Sergei Liakhovich in November of 2006. He lost the belt by unanimous decision Sultan Ibragimov in his next fight in June of that year.

The 33-year-old Love (34-7-1, 27 KOs) is coming off a 33-second stoppage win over Manoel Rodrigues de Souza in December to bounce back from a unanimous decision loss to Fabrice Aurieng in October.