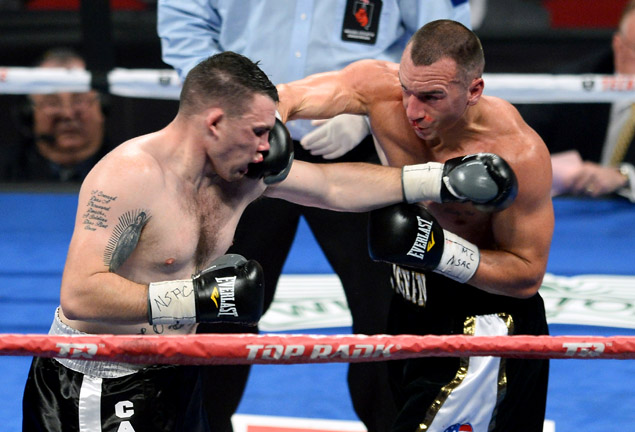 BROOKLYN, N.Y. –Popular light heavyweight "Irish" Sean Monaghan scored a fourth-round knockdown with a lopping right hand, even as he began bleeding profusely from cuts over both eyes in the ninth, and survived a 10th-round rally from rival Elvir Muriqi on the way to a crowd-pleasing unanimous decision victory at Barclays Center in Brooklyn, N.Y., on Saturday.

Monaghan was coming off his fourth straight knockout win represented by a fifth-round stoppage of Joe McCreedy, whom he floored once in the third round and twice in the final round on the undercard of Manny Pacquiao's unanimous decision over Tim Bradley at the MGM Grand in April.

Against Muriqi, Monaghan went the 10-round distance for only the second time in his career, the first, being a unanimous decision over Rayco Saunders in October 2012.

"I got called out by Jean Pascal, wanting me to fight him in Canada, so getting past this guy, I've got a couple of nice options, possibly, " said Monaghan. "They're trying to get Braehmer out of Germany, because [Top Rank CEO] Bob Arum's not crazy about me going over there and fighting him in Germany. We might be able to lure him out, somehow, some way."

Two of the division's top titleholders are RING and WBC champion Adonis Stevenson and IBF and WBA counterpart Bernard Hopkins, who are fighting on Showtime, the rival network to HBO, which televises Monaghan and Top Rank fighters.

WBO beltholder Sergey Kovalev could be an option down the road, given he fights for HBO and is promoted by Kathy Duva of Main Events.

Monaghan brought the pressure form the first round, moving in behind his jab and landing well to the head and body. Muriqi clubbed on occasion with his right and followup left, landing a hard right just under the final minute of the round. But Monaghan regained control with two shots to the body, then trapped Miriqi on the ropes and nailed him with rights and lefts late.

Monaghan tightened up his defense to start the second, before unleashing a series of right and left uppercuts that backed Muriqi to the ropes. It was more of the same in the center of the ring, although Muriqi set to fire lefts and rights over the top. Over the final minute, however, Monaghan went back to work, firing to the head, later, the body. A right hand wobbled Muriqi and pleased the crowd, but Monaghan's body shots were making a difference.

Near the two-minute mark of the third, Monaghan hammered away at Muriqi in a neutral corner, a session that lasted for nearly a minute and had referee David Fields appearing ready to step in and end the fight. Muriqi got a second wind for a period before Monaghan began to box well in retreat behind his jab, left hook and right hand to end the round.

Early in the fourth, both men took a breather behind their jabs, with Monaghan getting the better of that battle. Monaghan fired a right to the body shot with 80 seconds left, and, later, had Muriqi in a neutral corner for more punishment. Monaghan dropped Muriqi with just under 10 seconds left with a looping right hand. Muriqi rose just as the bell sounded ending the round.

Monaghan remained patient behind his jab in the fifth, wary of Muriqi's looping counters, until cornering him with about 58 seconds and deliving several vicious blows. Down the stretch, Monaghan, yet again, landed evenly to the body, closing with a nice right during a half-clinch.

Monaghan landed a five-punch combination with just over two minutes left in the sixth to commence another beating, including another looping right. Muriqi's blows having lost their steam, he was conrnered yet again over the first 20 seconds of the final minute, where he took more punishment to the body. Monaghan closed with four jabs and a right to the head that landed just prior to the bell.

The seventh and eighth represented a lull in the action as Monaghan spent the first half jabof each bing to set up his right. Although the game Muriqi continued to absorb punishment early, he later succeeded in forcing Monaghan — eyes slightly swollen — to give ground.

Monaghan regained the momentum over the final minute of the give-and-take ninth, even as he began bleeding profusely from cuts over both eybrows.

Mendoza walked back to his corner bleeding from the nose after a second round of vicious exchanges, and was promply dropped with a right hand early in the third. Mendoza rose on unsteady legs, after which a ringside doctor called a halt to the bout at the 36-second mark.

Mendoza lost for the second straight time, having fallen by unanimous decision to Miguel Angel Gonzalez in his previous bout also in February.

In the evening's first bout, middleweight Simeon Hardy (13-0, 10 KOs) of Brooklyn, N.Y., floored Malcolm Terry (6-3, 6 KOs) of Memphis twice in the second round, the second time, face-first and for good as Steve Willis stopped the fight at 62 seconds of the round.

In fight No. 3, Heather Hardy (10-0, 2 KOs) of Brooklyn left the ring with a badly bleeding right eye that was all but grotesquely swollen shut. Still, she nevertheless escaped with a disputed seventh-round technical split-decision victory in a shortened scheduled eight-rounder over Jaclyn Trivilino (9-8-3, 1 KO) of Plattsburgh, N.Y.

Although Hardy was backed up and roughed up throughout the fight, referee Pete Santiago had ruled Hardy's injury had been caused by a head butt. Prior to the final round, a ringside physician ruled that Hardy could not continue, forcing the verdict to go to the cards, where Hardy won by scores of 67-66, and, 68-65, respectively, in the cards of Waleska Roldan and Anthony Paolillo, with Glenn Feldman scofring it, 67-66 for Trivilino.