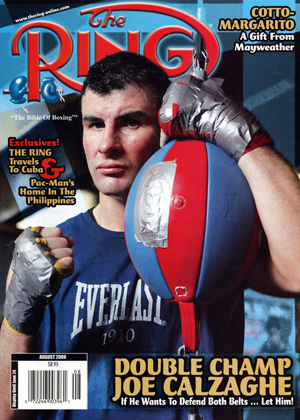 Junior middleweight Erislandy Lara said that he has "got to do my job" and defeat Saul Alvarez in their July 12 clash at the MGM Grand in Las Vegas before turning his attention toward potential bouts against Floyd Mayweather Jr., Miguel Cotto or Gennady Golovkin.

"My main focus right now is on training and working to prepare for 'Canelo,'" said Lara, a 31-year-old southpaw from Cuba who shared his thoughts after learning that Alvarez's trainer, Jose "Chepo" Reynoso told RingTV.com he expects the 23-year-old Mexican "to punish" him.

"I don't care about all of their talk but whatever they say, he's got to perform and July 12 instead of talking now. Come July 12, we'll see if those words become reality."

In his past three fights, Alvarez (43-1-1, 31 knockouts) has scored a seventh-round knockdown during a unanimous decision over Austin Trout in April 2013, lost to his WBC 154-pound belt to RING and WBA champion Mayweather by majority decision last September and rebounded with a 10th-round stoppage of Alfredo Angulo in March.

Lara's past two wins were a 10th-round knockout of Angulo, during which Lara was floored once each in the fourth and ninth rounds last June, and a unanimous decision over Trout, whom Lara dropped in the 11th round in December.

Lara (19-1-2, 12 KOs) has spent the past three weeks training in Las Vegas, where he has sparred with unbeaten 24-year-old super middleweight Luis Arias and 29-year-old middleweight DonYil Livingston, who has lost his past four fights, including one to Arias by unanimous decision in May 2013.

"Those are two guys who Floyd used before his fight with 'Canelo,'" said Lara's manager, Luis DeCubas Jr., who translated for the fighter. "We also have a couple of other guys coming in."

Like Lara, Alvarez said he is focused on his July bout, even as he mulled a potential bout with Cotto in the wake of the Puerto Rican's 10th-round technical knockout of Sergio Martinez on June 7 for THE RING and WBC middleweight championships.

Cotto had fought at junior middleweight since 2010, moving up to a catchweight of 159 pounds for the first time to become the first Puerto Rican fighter to win a fourth title in as many weight classes.

In victory over Alvarez, Lara said he would target Mayweather, Cotto and Golovkin in order.

Golovkin will pursue his 17th consecutive stoppage win in defense of his WBA middleweight title against ex-beltholder Daniel Geale on July 26 at Madison Square Garden in New York.

"Like I have said before, my main focus right now is 'Canelo' but if you want to say, just for name's sake, it would be Floyd Mayweather – number one, Cotto – number two and then Golovkin," said Lara. "I want to fight Cotto in Puerto Rico and Golovkin. I've called him out and he's turned it down. We've got no problem of going up and giving it to Golovkin."

Van Heerden told RingTV.com that he expected Alvarez to win by a late stoppage.

"I've got to do my job on July 12 and if his sparring partners want to get into the ring after the fight with 'Canelo,' I've got no problem beating them up as well. But the talk is over and now, it's time to fight."