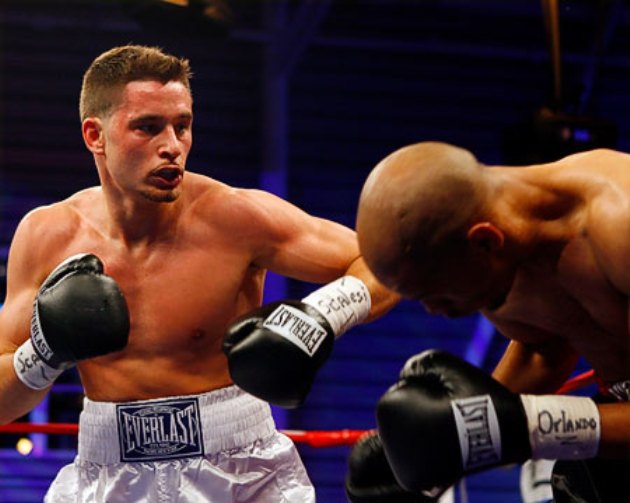 Chris Algieri is confident that past sparring sessions with the likes of Saul Alvarez, Marcos Maidana and Brandon Rios will be beneficial in Saturday's bout against WBO junior welterweight titleholder Ruslan Provodnikov at Barclays Center in Brooklyn on HBO.

"That has really helped me with my confidence, not so much the technique. The technique is already there but just knowing that I belong in the ring with that level of guys. Brandon Rios is hard puncher and a come-forward type of a guy," said Algieri, 30.

"Marcos Maidana is another guy that I've worked with who has a very similar style and even 'Canelo' Alvarez and other big punchers. Being in the ring with those guys for sparring has allowed me to realize the level that I'm at, so my confidence is very well rounded."

Nicknamed "The Siberian Rocky," Provodnikov (23-2, 16 knockouts) was last in the ring for a 10th-round stoppage of Mike Alvarado, whom he floored twice on the way to winning his belt in October. Rios, a former lightweight beltholder, has stopped Alvarado and lost to him by decision.

Before facing Alvarado, Provodnikov scored a 12th-round knockdown during a unanimous decision to then-WBO welterweight titleholder Tim Bradley in a March bout named "2013 Fight of the Year" by THE RING as well as the Boxing Writers Association of America.

Algieri (19-0, 8 KOs), for his part, has said he has detected weakness in Provodnikov's game after having studied his bouts with Bradley and his other unanimous decision loss to Mauricio Herrera in January 2011.

"This is a great way for me to get shown to a larger audience and this is huge. This is at the top of the sport. This is where my team and I see ourselves and we're happy to be here," said Algieri, who stands 5-foot-10 to Provodnikov's 5-6.

"I don't think that Ruslan has fought a guy similar to me in terms of my size, my athleticism and my speed and just my skill set. So it's really going to come down to who can fight their fight at the right time and at the right place in the ring."

"To be honest with you, I don't have a problem with fighting guys like him. All of my career, I've fought taller guys that box and that's throughout my career. I always fought them with my style. I don't think that I have problems with fighters like him," said Provodnikov, whose chief corner man is six-time "Trainer of The Year" Freddie Roach.

As he enters Saturday's defense, Provodnikov said his mentality is that of the hungry, unknown challenger.

"The belt, it has only given me a lot more responsibility as a fighter. I have to defend the belt and I have to prove to people now that I am what I've shown in the last two fights. Mentally, as I was training for this fight, I forgot that I'm champion. That's what motivates me even for this fight. I don't even know if I'm considered the favorite to win," said Provodinikov.

"A lot of people think that the other guy is better than I am and a better boxer. So overall, this feels like a challenge for me again to prove myself. This has been a very, very tough eight weeks of training but I knew that I had to do that in order to perform well enough in this fight."