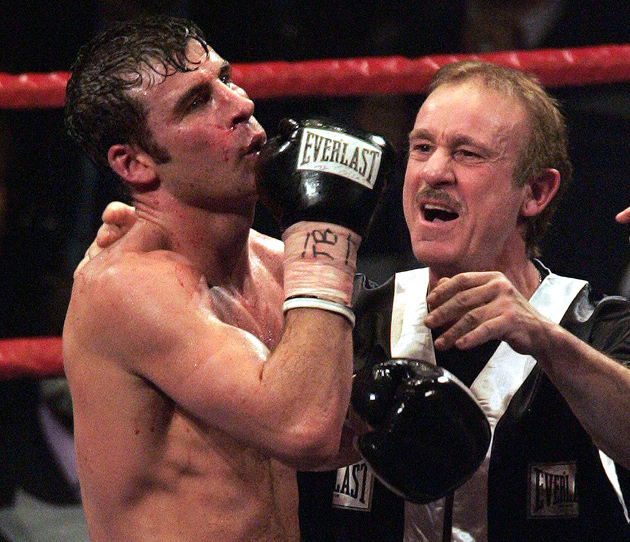 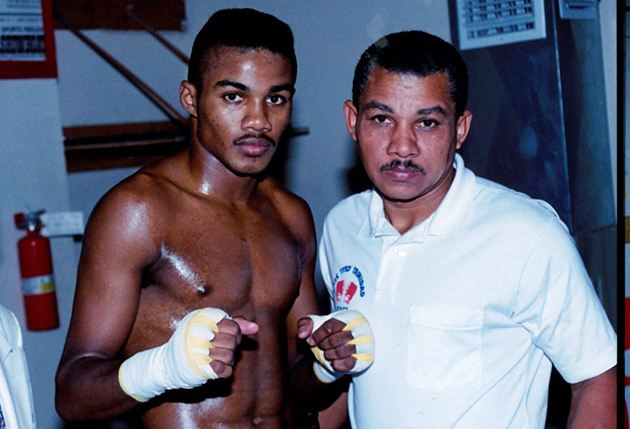 CANASTOTA, N.Y. – In the name of the father.

That was the recurring theme of the 25th annual International Boxing Hall of Fame induction Sunday, with enshrinees Oscar De La Hoya, Felix Trinidad and Joe Calzaghe all making a point to profusely thank their fathers for putting them on the path that led to this central New York village and official certification as a boxing legend.

But if Joel De La Hoya Sr., Felix Trinidad Sr. and Enzo Calzaghe all share a large chunk of the credit for their celebrated sons’ ring success, it should be noted that the courses they followed are as different as the ones taken by the champions they raised. In boxing, one size definitely does not fit all.

Joe Calzaghe, who grew up in a small town in south Wales in the United Kingdom, was a kid who first dreamed of becoming a soccer star. But he soon learned that he was better with his hands than his feet, and a gift that Enzo – a musician with no background in boxing – presented him around that time turned out to be something of a revelation.

“I remember that my dad bought me a speed bag when I was 8 or 9,” said Calzaghe, the longtime WBO super middleweight champion who unified all the major titles of the 168-pound division and retired with a perfect professional record of 46-0 (32 victories coming inside the distance). “My dad’s a musician; he never boxed in his life.”

After freezing on the bench as a non-star, or even a non-starter, with his youth soccer team – they call it football, the real kind, in the UK and a lot of other places around the world – Calzaghe went to a boxing gym where, he said, he “started beating other people up. I thought, `I like this boxing. This feels good.’”

And Enzo, the musician with no boxing background, thought he detected enough in his son to throw himself so into Joe’s new passion that he became his one and only trainer, even though a lot of boxing people were advising the young prodigy that he needed a chief second who knew the sport a lot better to more fully develop his skills.

So did Joel and Felix Sr., who were just as instrumental in steering their sons into boxing. Joel, who had a background in the sport, pushed Oscar hard while Don Felix, a Puerto Rican national champion, employed what might be described as friendly persuasion. They also were in the large audience at Sunday’s sun-dappled induction ceremony, as was Enzo.

“I dearly thank my father,” Oscar said in his acceptance remarks. “Thank you for being with me, for starting my career, for making me the person that I am, the fighter that I am. I will always remember the days when we used to wake up early in the morning and run miles and miles.

“He would work 15 hours a day and meet me at the gym so we could go train, just so I could fulfill my dreams. So father, without you, this wouldn’t be possible, and I recognize that. Thank you. I love you very much.”

Felix Jr., better known to his family, friends and army of fans as “Tito,” described Don Felix as “the best trainer,” without whom he never could have achieved the success he enjoyed in winning world titles in five weight classes.

Oscar and Tito, of course, are forever destined to be joined at the hip. They are the same age – 41 – and retired in the same year, 2008, De La Hoya with a 39-6 record that includes 30 knockout wins and Trinidad with a 42-3 mark with 35 KOs. And, of course, they squared off in a welterweight unification megafight on Sept. 18, 1999, at Las Vegas’ Mandalay Bay. Trinidad scored a controversial, 12-round majority decision when De La Hoya, who thought he was comfortably ahead on points, elected to play keep-a-way the final three rounds. It proved to be a strategic blunder as Trinidad won by margins of 115-113 and 115-114 on the respective scorecards of Jerry Roth and Bob Logist, while Glen Hamada had it a 114-114 standoff.

“Tito and I grew up together in boxing,” De La Hoya said Sunday. “Our careers moved on parallel tracks until we met one day in 1999. Some called it the `Fight of the Millenium.’ He was undefeated; I was undefeated. The Mandalay Bay was packed. And you know what?

“Never mind,” he said after a delay, the punch line drawing howls of laughter from the big crowd.

De La Hoya and Trinidad never fought again, although a rematch would have done huge business.

“We tried,” said HBO Pay Per View boss Mark Taffet, who flew in for the induction ceremony, which came the day after Miguel Cotto’s victory over Sergio Martinez the night before in New York City. “We talked to Don (King, Trinidad’s promoter) and Bob (Arum, De La Hoya’s promoter), but nothing ever came of it.”

What remains is the memory of the fight itself, and the role the fighters’ fathers played in that bout and, really, in the entirety of their careers.

Joel insisted that the young Oscar seek out and administer a beating to a bully who had chased the not-yet-golden-child home from school one day, informing his son in no uncertain terms that De La Hoyas did not run from trouble, they stood their ground and fought through it.

The firm hand of the father was also evident in his coordination of Oscar’s training camp, and his role in the shifting case of characters who worked his son’s corner, a group that included, at various times, trainers and consultants Robert Alcazar, Jesus Rivero, Emanuel Steward, Gil Clancy and Floyd Mayweather Sr.

For Tito, his father was the only voice he was allowed to hear on fight night, or wanted to.

“It was the right decision then, and it still is the right decision,” Tito said before that 1999 fight, of his following in Don Felix’s footsteps. “My earliest boxing memory is as a 5-year-old and going out to jog in the morning with my father. Hanging out with him was fun. It wasn’t exercise; it was playing.”

Different routes to the same destination here, and fitting, what with Father’s Day coming up on June 15.