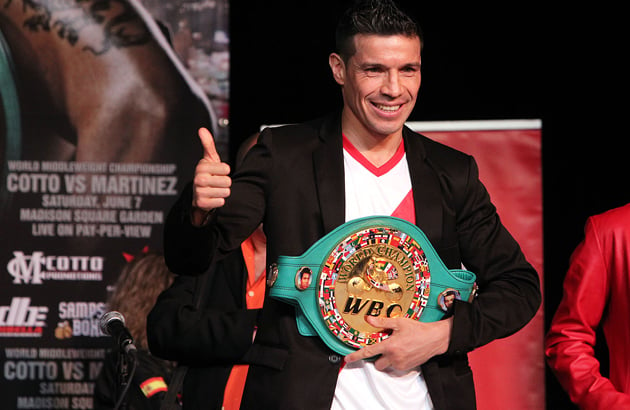 Sugar Ray Leonard also granted "a slight edge to Cotto" but retired former contender Micky Ward gave the nod to "Sergio by decision" in advance of their HBO Pay-Per-View battle on Saturday at Madison Square Garden in New York City, in accordance with a poll taken of fighters and celebrities by Top Rank Promotions publicist Fred Sternburg.

The Argentine veteran has been champion for four years since defeating Kelly Pavlik by unanimous decision in April 2010 and is 7-0 with four knockouts since falling by majority decision in December 2009 during a "Fight of the Year"-caliber brawl with Paul Williams that featured first-round knockdowns by each fighter.

Martinez avenged the loss to Williams by stopping him in the second round in November 2010, but has not fought since April 2013, when he rose from an eighth-round knockdown for a unanimous decision over Martin Murray in Buenos Aires.

The 33-year-old Cotto (38-4, 31 KOs) will be in his second fight with six-time Trainer of The Year Freddie Roach, having fought at junior middleweight since 2010.

Cotto is moving up to a catchweight of 159 pounds for the first time in an attempt to become the first Puerto Rican fighter to win a fourth title in as many weight classes against Martinez.

"This will be a defining moment for Cotto," said Hall-of-Famer Mike Tyson, a former undisputed heavyweight champion. "If he gives his absolute best and uses everything he has learned from his experience in boxing, he will give a great account of himself. I would like to see him do well because he has gotten some bad breaks in his career."

Cotto is 9-1 with five knockouts in New York and 7-1 with four stoppages at the Garden, where he is fighting Martinez the night before the Puerto Rican Day Parade. Saturday evening is also one night before Trinidad is to be inducted into the International Boxing Hall of Fame in Canastota, N.Y.

"It is an interesting fight for the boxing world and also for Team Cotto," said Trinidad. "Cotto should win by decision."

Ward is best known for his trilogy with Arturo Gatti, whom he defeated and then twice lost to before retiring. Of the three Gatti-Ward bouts, the first and third earned THE RING magazine’s “Fight Of The Year” honors.

The late Gatti earned IBF junior lightweight and WBC junior welterweight titles and Ward was in attendance when Gatti was inducted into the International Boxing Hall of Fame's Class of 2013.

"Sergio by close decision," said Ward, for whom an Oscar-winning move, "The Fighter," starring Mark Wahlberg, was made. "He must use his smarts or Cotto will take it."

Like Ward, Tyson and Trinidad, Leonard gives Cotto a shot to win, even as Leonard mulled whether Martinez's injuries will be the determining factor or the fact that Cotto is prone to cuts.

"I've met both of these incredible fighters with such a wonderful demeanor outside the ring and the question is: Who has the most boxing ingredients left at this point in their career?" said Leonard, a five-division champion and Hall-of-Famer.

"Sergio always will have that power, which never leaves a boxer even past his prime and Cotto will always have that knowledge to break down an opponent during the fight. A slight edge to Cotto but don't bet the house."

Cotto is coming off a third-round stoppage of Delvin Rodriguez in October that helped him bounce back from consecutive decision losses to Floyd Mayweather Jr. and Austin Trout in May and December 2012, respectively. Cotto's loss to Trout represented his eighth appearance at the Garden and his 10th in New York.

"Cotto is going to have to cut Martinez off in the ring because Martinez is a great mover," said Tyson. "He's like a tango mover when he boxes. My personal opinion is that I think this is going to be one of the greatest fights of the year."