Lem’s latest: Fonfara says Stevenson’s been ‘knocked out before’ 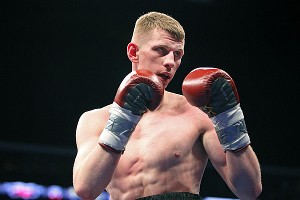 Heading into Saturday night's defense against Andrzej Fonfara, RING and WBC light heavyweight champion Adonis "Superman" Stevenson is 13-1, with 13 knockouts in his past 14 fights, and has stopped 10 consecutive opponents since being knocked out by Darnell Boone in April 2010.

But the Fonfara (25-2, 15 knockouts) points out that while Stevenson (23-1, 20 KOs) is known for his ability to finish opponents quickly, he has in fact also lost by stoppage.

"He's gotten knocked out before," said Fonfara, a winner of 15 straight, 12 by knockout. "I've got a good punch with both hands. It proves he goes down too. He's not 'Superman' like he thinks he is. He went down and he lost the fight."

"He’s confident. I'm confident," said Stevenson, who went 4-0 over the course of 2013 last year with successive knockouts of Boone, Chad Dawson (RingTV's "Knockout of the Year"), Tavoris Cloud and Tony Bellew. "But I have the power to end this fight quickly. My trainer trained me for the knockout, so I'm looking for it."

In victory over Fonfara, Stevenson hopes to set up a potential showdown with 49-year-old Bernard Hopkins, who was in action last month with a majority decision victory over Beibut Shumenov, adding the WBA belt to Hopkins' IBF title.

THE RING's No. 2-rated junior welterweight, Ruslan Provodnikov (23-2, 16 KOs), will be feaured on HBO's 2 Days on May 24 in advance of his June 14 WBO title defense against Chris Algieri at Barclays Center in Brooklyn, N.Y.

2 Days covers a 48-hour span in the life of the 30-year-old Provodnikov leading up to and including his 10th-round stoppage over Mike Alvarado, whom he floored twice in the eighth round in Alvarado's hometown of Denver in October.

Prior to facing Alvarado, en route to a unanimous decision loss to the-WBO welterwight titlist Tim Bradley, Provodnikov scored a 12th-round knockdown in RingTV.com's "2013 Fight of the Year" in March of last year. This month, Bradley-Provodnikov received the award for The "Muhammad Ali-Joe Frazier Fight of the Year" by the Boxing Writers Association of America.

Las Vegas-based featherweight Rocco "So Cal Kid" Santomauro (11-0, 1 KO), 26, known for out-of-ring antics like eating cake while weighing in, will face an opponent to be determined on May 31 at Tropicana Hotel and Casino, Las Vegas, promoters Lou DiBella and Sampson Lewkowicz announced on Thursday.

Dargan-Flores is in support of a light heavyweight eliminator between Anatoliy Dudchenko (19-2, 13 KOs) and Nadjib Mohammedi (34-3, 20 KOs), the winner of which becomes the mandatory for Bernard Hopkins. The card is presented by Main Events and Peltz Boxing in association with Greg Cohen Promotions.

"This is bigger than Philly vs. Philly. I already own Philly," said Dargan, who, like Flores, is from Philadelphia. "I am on a whole bigger mission. Come June 21, if he is not special, he is not going to last all these rounds with me. People ain't seen the best of me yet."