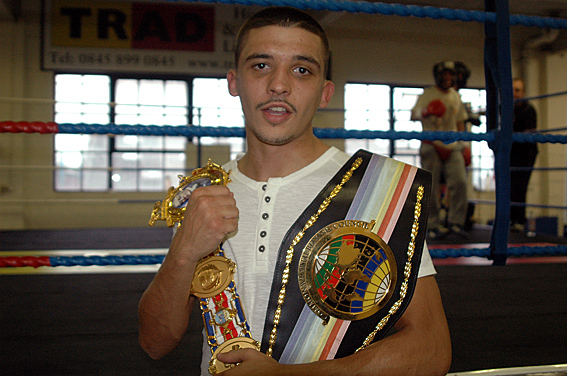 18
May
by Doug Fischer

Featherweight Lee Selby proved to be more than one level above Romulo Koasicha, as he cruised to a one sided unanimous decision in Cardiff, Wales tonight. The bout was scheduled for 12 rounds and the official scores were 119-109 twice and 119-110.

Selby, THE RING's No. 9-rated contender at 126 pounds, moved adeptly around the ring and tagged his man with crisp accurate punches for the duration. Koasicha landed a few eye catching bombs, but you could literally count them on one hand and Selby fired back defiantly, or held when he needed the time.

“I think that was a good display of boxing,” said Selby, when interviewed by Sky Sports. “I proved that I could box well on the back foot, and it’s time to move on now. I could hold my own against any featherweight, but it’s up to my team where we go from here.”

The contest was an eliminator for the WBC featherweight championship, but Selby is likely to have at least one more outing before challenging for world honors. Meanwhile titleholder Jhonny Gonzalez defends against Clive Atwell, next weekend, in Mexico, and there is also talk of him taking on Abner Mares in a rematch.

Mares was sensationally stopped in one round by Gonzalez last August and must overcome the unbeaten Puerto Rican Jayson Velez, to earn his shot at redemption. That bout has been ordered by the WBC as a “final” eliminator and is scheduled for July.

“Lee is in at the deep end now,” said promoter, Eddie Hearn. “There are no easy fights out there for him, but one more and then it will be the world title shot.”

Politics aside, the talented Selby (19-1, 7 knockouts) remains on course for that title shot, if not this year then sometime in early 2015.


Cleverly stops Corbin in Round 2

Former WBO light heavyweight titleholder Nathan Cleverly made a successful debut in the cruiserweight division by halting journeyman Shawn Corbin in the second round of a scheduled 12. The official time was 2:19.

After a nondescript opening session, Cleverly positioned himself well at mid-range in the second and began scoring immediately. A right uppercut lifted Corbin’s chin for a whipping left hook and the visitor backed off in distress. The Welshman followed and more uppercuts and left hooks, as well as some nice touches to the body, prompted referee Richie Davis to rescue Corbin from further punishment.

“I’ve had nine months out of the ring, but needed that time to adjust to the new weight class,” said Cleverly, who weighed 198.25 pounds. “I’m mentally and physically refreshed and it’s great to come back with a bang. I just wanted to get rid of the memory of that Sergey Kovalev fight.”

Cleverly, who was unbeaten in his first 26 fights, was brutally halted by the rampaging Russian power puncher in four rounds, last August. As a result, tonight’s bout was a safety first engagement against an undistinguished opponent, who had lost four of his twenty one contests by stoppage.

Having recently signed with Eddie Hearn’s Matchroom Boxing, the plan for Cleverly is a lucrative domestic rematch with arch rival, and promotional stable mate, Tony Bellew. The Liverpool puncher, who won his own cruiserweight debut in March, dropped a majority decision to the Welsh star in October 2011 and the second fight is a natural.

“Nathan will be back out in July in a double header with Tony Bellew,” said Hearn. “After that the rematch is inevitable because that is a fight the public want to see.”