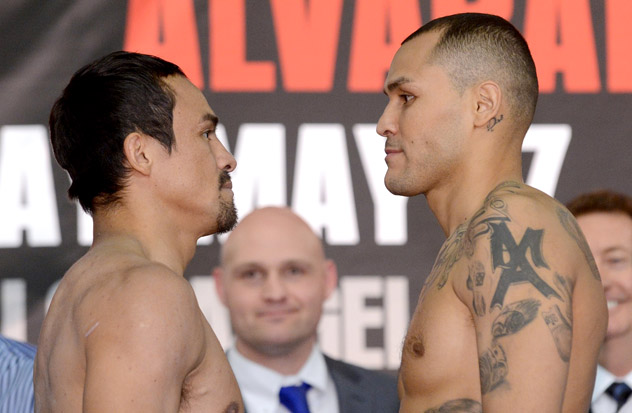 16
May
by Lem Satterfield

Juan Manuel Marquez and former 140-pound titleholder Mike Alvarado weighed in at 141.6 and 143.2 for Saturday's 143-pound WBO welterweight eliminator bout at The Forum in Inglewood, Calif.

Marquez was beaten in October by split decision to then-WBO beltholder Tim Bradley, quelling the momentum built by his sixth-round stoppage of Manny Pacquiao in December 2012. Alvarado is attempting to rebound after having been floored twice in a 10th-round stoppage loss to WBO 140-pound titleholder Ruslan Provodnkiov in October 2012.

A four-division titlewinner who turns 41 in August, Marquez went 12-0 with nine knockouts at the venue formerly known as the Great Western Forum. Now under the ownership of Madison Square Garden, The Forum recently underwent a $40 million facelift.

Marquez's run started with a first-round stoppage of Martin Ochoa in January 1995 that took Marquez to 9-1 with seven knockouts following his American debut.

Though losing his professional debut by disqualification, Marquez was 29-1 with 22 knockouts after his final bout at The Great Western Forum — a second-round knockout of Wilfredo Vargas.

"The people will see a war. This fight will be a war because Mike Alvarado is a strong fighter, and I feel like this is going to be a great fight. I want to give another great fight to all of the Mexican people."

Alvarado is 1-2 over the course of his past three fights, having been stopped in the seventh round by Brandon Rios before winning their rematch for the WBO's vacant 140-pound belt by unanimous decision. Provodnikov took Alvarado's WBO title almost seven months later.

The winner of Marquez-Alvarado has been mandated to face Pacquiao, who regained the belt he lost by split decision to Bradley in June 2012 with last month's unanimous decision.

"My thoughts about the fight are that I think that it's going to be a fantastic fight for the fight fans and for everybody watching around the world," said Bradley, who worked as a weigh-in co-host with Crystina Poncher. "Stylistically, Marquez is a veteran, and he's been in there with everybody, including myself. He's one of the best counterpunchers in the game."

Last March, Bradley rose from a 12th-round knockdown to secure a unanimous decision over Provodnkiov, who defeated Alvarado.

For the Marquez-Alvarado undercard, Turkish junior welterweight Selcuk Aydin (26-2, 19 KOs) weighed 139.2 pounds, and will pursue his fourth straight win in a clash against Ukrainian Viktor Postol (25-0, 10 KOs), who weighed 139.6 for their eliminator to face RING/WBA/WBC 140-pound champion Danny Garcia.


THE REST OF THE 11-FIGHT CARD

Junior lightweights Diego Magdaleno and Oscar Bravo came in at 132.4 and 136.4, respectively. Also, junior lightweights Oscar Valdez and Noel Echevarria were 129.4 and 130, junior middleweights Armen Ovsepyan and Brad Solomon were 146.6 and 149.2, and welterweights Zach Wohlman and Eddie Cordova came in at 143.5 and 143.8.