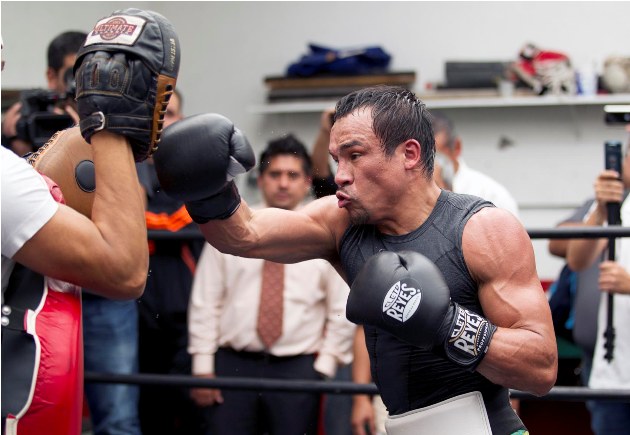 13
May
by Lem Satterfield
Four-division titlewinner Juan Manuel Marquez said he saw "the best Manny Pacquiao" last month during the eight-division titleholder's unanimous decision victory over Tim Bradley, a triumph in which Pacquiao regained the WBO welterweight belt he had lost to Bradley by split decision in June 2012.

In what will represent somewhat of a homecoming for Marquez, the 40-year-old will face former 140-pound titleholder Mike Alvarado in Saturday's 144-pound bout at The Forum in Inglewood, Calif., the winner of which will be the mandatory challenger to Pacquiao.

Marquez was last in the ring, losing unanimous decision to Bradley in October, this after having scored a sixth-round stoppage in December 2012 against Pacquiao, against whom Marquez is 1-2-1.

Marquez's ultimate goal is another showdown with Pacquiao, against whom a win would make Marquez the first Mexican fighter to earn a fifth belt in as many weight divisions. Still, Marquez is not looking beyond Alvarado, against whom he expects "a war."

"It's not that difficult for me. Maybe in the future, I will have the most important fight of my career. Right now, I'm thinking about Alvarado because Alvarado is a tough fighter," said Marquez.

"Right now, I'm thinking about Alvarado. I know that Manny Pacquiao is there if I win this fight," said Marquez. "I don't want to look past this fight right now. Let's find out what happens on Saturday and then go from there."

Denver, Colorado's Alvarado (34-2, 23 KOs), 33, is 1-2 over the course of his past three fights, all of which happened at junior welterweight. Alvarado was stopped in the seventh round by Brandon Rios in October 2012, won their rematch for the WBO's vacant 140-pound belt by unanimous decision in March of last year, then lost the title by 10th-round knockout to Ruslan Provodnikov last October.