Arreola weighs half pound lighter than Stiverne, both under 240 pounds 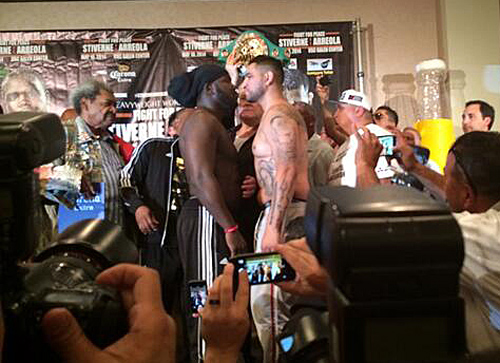 Chris Arreola weighed half a pound lighter than Bermane Stiverne at Friday's weigh-in for thier rematch and WBC heavyweight title bout. Arreola, who has come in as heavy as the 250-pound range for past important bouts, weighed 239. Stiverne, who won their first bout by unanimous decision, weighed 239.5.

Both fighters looked fit for their ESPN-televised grudge match that takes place at the Galen Center on USC's campus in Los Angeles on Saturday. Friday's weigh-in took place at the nearby Radisson Hotel. The two heavyweight contenders engaged in an intense staredown after the weigh-in, which was no doubt extra heated due to the hostile and profanity laced final press conference on Thrusday.