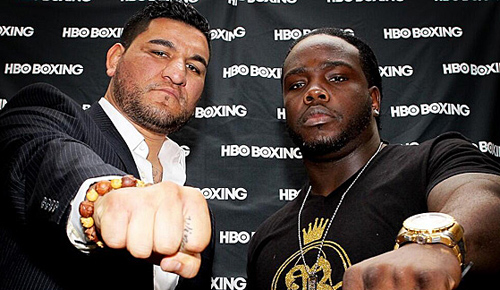 RingTV.com has a live, round-by-round update on this page for Saturday night's heavyweight rematch in Los Angeles during which Bermane Stiverne scored two final round knockdowns on the way to a sixth-round technical knockout over Chris Arreola for the WBC's belt that was vacated by Vitali Klitschko.

After the second knockdown, Arreola was being hammered when referee Jack Reiss stepped in and waved an end to the fight at the 2:02 mark.

In the first fight, last April, Arreola suffered a broken nose and was dropped in the third round of a unanimous-decision loss to Stiverne.

Stiverne became the first heavyweight champion of Haitian descent, and the 33-year-old Arreola (36-4, 31 KOs) failed to become the first of Mexican descent, having rebounded from the loss to Stiverne with a first-round knockout of the highly touted Seth Mitchell in September.

STIVERNE WINS BY SIXTH-ROUND TECHNICAL KNOCKOUT AT THE 2:02 MARK!!!!

Round 1: Referee Jack Reiss, who worked their first fight, makes fighters tap gloves. Action begins. Stiverne retreating, Arreola moving forward. Right after the jab and a couple of body shots along the ropes from Arreola. Arreola right hand is blocked. Right hand reaches and a left by Arreola. Jab by the covering Stiverne. Double jab by Arreola, who backs off after taking a right. Arreola retreating. Pawing jab by Stiverne with Arreola on the ropes. Three rights a left and a right by Arreola. Right hand and left by Arreola. Stiverne lands a right and left upercut that cause Arreola to retreat. Right by Stiverne. ROUND-STEALING LEFT, AND FOLLOWUP RIGHT RIGHT HAND WOBBLES ARREOLA AT THE BELL. Stiverne, 10-9

Round 2: Stiverne retreating behind his jab. Arreola was left with something to think about. Arreola pound home a seven-punch combination. Counter-right, left and right by Stiverne. Five-punch combo by Arreola, but then, he backs off. Stiverne goes back to jabbing, looking to land a telling right. LEAD RIGHT HAND BY ARREOLA ROCKS STIVERNE. Arreola lands a right and a left and retreats. Arreola's on the ropes. Takes an uppercut. Stiverne pushed threw the ropes and down. It's a ruled slip by Reiss. Solid right hand and left by Arreola. Stiverne rips a right and a left. Arreola, 10-9; Even, 19-19.

Round 6: Stiverne's jab being either blocked or short. Jab by Arreola reaches. Grazing right by Arreola. Jab lands for Stiverne. Jab to the body and head by Stiverne. LOOPING RIGHT TO THE TEMPLE DROPS ARREOLA. HE'S UP AT THE COUNT OF EIGHT. Hard left and right by Stiverne. Right hand and left. THREE PUNCH COMBINATION PUNCTUATED BY A RIGHT HAND PUTS ARREOLA DOWN AND THREW THE ROPES. He's up. STIVERNE IS ON HIM AND POUNDING AWAY. JACK REISS STEPS IN TO STOP IT.

STIVERNE WINS BY SIXTH-ROUND TECHNICAL KNOCKOUT AT THE 2:02 MARK!!!!!