Manuel Charr announces he will face Alexander Povetkin on May 30 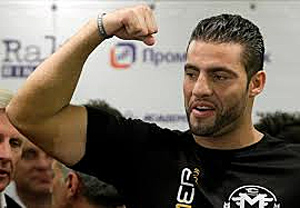 Once-beaten former heavyweight title challengers Manuel Charr and Alexander Povetkin will meet on May 30 in Moscow, Charr announced on Friday, according to several reports.

The 29-year-old Charr (26-1, 15 knockouts) has won five straight fights, four of them by stoppage, since suffering a technical knockout loss to then-WBC titleholder Vitali Klitschko in Moscow in September 2012. Charr was last in action for a unanimous decision victory over Kevin Johnson on April 12.

"This will be an awesome fight. I am very proud that I got invited to fight Povetkin and reached an agreement with his handlers. This is my big chance to get in line for another world title shot. The winner will move up the WBC ratings to a top position," stated Charr, in an issued statement.

"And one thing I know for sure: If I can beat Povetkin in Moscow, I can and will definitely go on to do what I promised [the late] Don José Sulaiman years ago. I will become heavyweight champion of the world."

The 34-year-old Povetkin (26-1, 18 KOs) was last in action against RING, IBF, WBA and WBO champion Wladimir Klitschko, who floored him once in the second round and three more times in the seventh on the way to a unanimous decision in October.

"I know Moscow and Moscow knows me. That's why I immediately accepted the offer. I will not feel like fighting abroad. I have so many fans and friends in Moscow that I will turn this into my home crowd. And of course, I am traveling with a big team and entourage," said Charr.

"Together we will conquer Moscow, beat Povetkin, bring the WBC international championship back to Germany and then go on to become world champion. This fight is the key. We will only have a rather short camp, but I am still in shape from my fight against Kevin Johnson on April 12, so I won’t have any problems. I promise to all of my fans that I will be in the best shape ever. It will be an epic battle and I will win it."