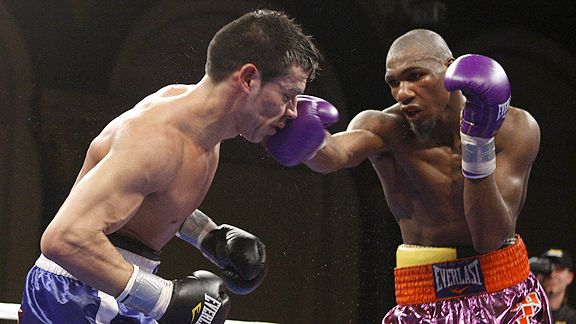 LAS VEGAS — Former welterweight and junior middleweight titleholder Paul Williams received the "Bill Crawford Award for Courage in Overcoming Adversity" at Thursday night's 89-annual Boxing Writers Association of America dinner at the MGM Grand, having remained active and maintained his joy for living despite having suffered a career-ending motorcycle accident at the age of 30 in May 2012 that rendered him paralyzed from the waist down.

Williams, now 32, retired with a record of 41-2 (including 27 knockouts) following a unanimous decision over Japan’s Nobuhiro Ishida in February of 2012. Once known as "The Punisher," Williams still goes hunting, fishing and boating, and was scheduled to face Saul "Canelo" Alvarez at the time of his accident.

Williams was asked if his relentless "get you before you get me" approach was missed by fans, Williams gave a brief assessment of today's young boxers.

"When I was up and coming, of course they gave me some tomato cans, then they gave me some cab drivers, then they gave me a little bit of pork chops, then they built up to the steaks and all of that," said Williams, whose career was highlighted by splitting bouts with current RING and WBC middleweight champion Sergio Martinez and ex-beltholder Carlos Quintana, as well as triumphs over Winky Wright, Antonio Margarito, Erislandy Lara, Kermit Cintron and Sharmba Mitchell.

"Well, there were guys like Margarito, that was a steak. So, it was a little tougher and I got tested. But nowadays, these guys they're fighting cab drivers and tomato cans and when they get up to a pork chop, they can't even bite through that, so how do you expect any of those guys to bite through a thick steak? What I'm saying is that they're not getting tested because when you're being tested, you can't go from eating pork chops to biting through steaks."