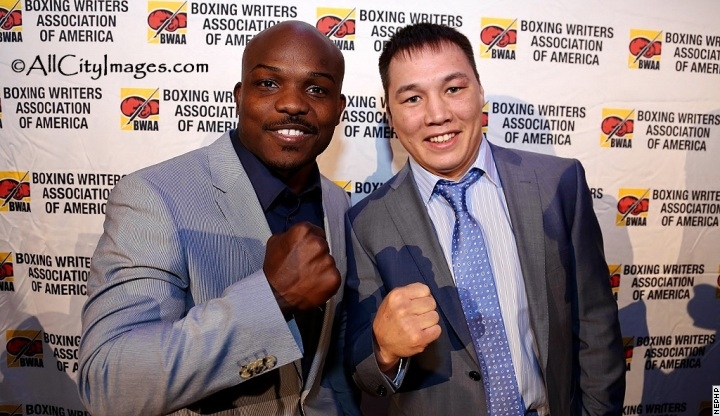 The star-studded sold-out crowd of more than 350 included former undisputed heavyweight champion Mike Tyson, who made the evening's final presentation of the "Muhammad Ali-Joe Frazier Fight of the Year Award" to the WBO welterweight bout featuring Tim Bradley and Ruslan Provodnikov, who dropped Bradley in the 12th round of his unanimous decision loss in March of last year.

The event did not include the winner of the "Cus D'Amato Manager of the Year Award," Al Haymon, a powerful and mysterious advisor of fighters who rarely makes public appearances and does not do media interviews.

"I am not Al Haymon," said Haymon's self-proclaimed "best friend of 35 years" Sam Watson, in accepting the honor on Haymon's behalf, "but I do play him on T.V."

Bradley and Provodnikov were the final dignitaries to receive their awards with the winner of their violent clash calling for peace during what has been a time of polarization in boxing between network rivals Showtime and HBO, who, respectively, are aligned with promotional adversaries Golden Boy Promotions and Top Rank Promotions.

With Showtime Sports boss Stephen Espinoza, ally Golden Boy CEO Richard Schaefer in attendance, HBO ringside analyst Jim Lampley and Top Rank Vice President Carl Moretti all in attendance, Bradley delivered a "Can't we all just get along?" speech calling for the entities to end their polarization, "get together" and "make the fights that the fans want to see."

Lampley was the first to jump to his feet, clapping intensely in response. Few others stood with him, however.

Mayweather was named the recipient of the "Sugar Ray Robinson Award" for the "2013 Fighter of the Year," and took the stage with his four children — two each in boys and girls ranging in age from 9 through 13. Also joining Mayweather were his father and trainer, Floyd Mayweather Sr., after being introduced by BWAA president Jack Hirsch.

Mayweather received a standing ovation with Bradley being the first to rise to his feet.

"I've had a remarkable career," said Mayweather, who turned 37 in February. "My thing is to take it one fight at a time and to fight whoever they put in front of me."

Last September, Mayweather (45-0, 26 knockouts) dethroned Saul "Canelo" Alvarez by majority decision for the RING and WBC 154-pound championships in a bout that became the highest-grossing boxing event of all time with nearly $150 million in revenue reported.

Mayweather-Alvarez eclipsed the $136 million earned by Mayweather’s 2007 victory over Oscar De la Hoya, the last time Mayweather was named the BWAA's "Fighter of the Year."

Last May, Mayweather unanimously decisioned Robert Guerrero in defense of the WBC 147-pound title he had earned by dethroning Victor Ortiz via fourth-round stoppage in September 2011, also cementing his status as RING welterweight champion.

"There are so many great champions who have opened up the door for me to be where I'm at today and I'm very, very thankful to be here," said Mayweather, whose promotional company has several fighters, one of whom, Ishe Smith, briefly held the IBF's junior middleweight belt. "I've got two of the very best trainers in the world and they're both on my team. My father and my uncle, Roger Mayweather. There are so many people who have played a major, major role with helping me to be where I'm at."

Against Maidana, Mayweather will make his 12th appearance at the MGM Grand.

"There's no better place to fight than the MGM Grand," said Mayweather. "I take my hat off to guys like Mike Tyson who opened the door…I've never gotten an award like this before, so thank you."

Former welterweight and junior middleweight titleholder Paul Williams received the "Bill Crawford Award for Courage in Overcoming Adversity," having remained active and maintained his zest for life despite having suffered a career-ending motorcycle accident at the age of 30 in May of 2012 that rendered him paralyzed from the waist down.

Williams, now 32, retired with a record of 41-2 (including 27 knockouts) following a unanimous decision over Japan’s Nobuhiro Ishida in February of 2012. The fighters once known as "The Punisher" still goes hunting, fishing and boating.

Williams was scheduled to face Alvarez at the time of his accident and was presented with an honorary "RING" belt by WBC President Mauricio Sulaiman.

"This is a big thing for me because it shows that the writers and the boxing fans in the world appreciated a guy went out there and fought his heart out and who never ducked nobody. So this award, it's really big for me.," said Williams during an interview with RingTV.com.

Espinoza presented the BWAA's "Sam Taub Award for Excellence in Broadcast Journalism" to Paulie Malignaggi, a two-division titlewinner who is also a Showtime ringside boxing analyst.

Tied for honors as the recepients of the "Barney Nagler Long and Meritorious Service Award" were Lee Samuels, a 32-year publicist for Top Rank Promotions, and respected broadcaster Colonel Bob Sheridan.