IBF: Bernard Hopkins can unify with Adonis Stevenson over his mandatory 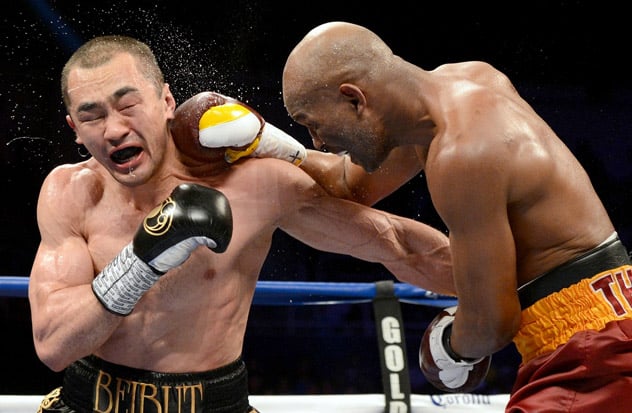 Although the IBF has ordered titleholder Bernard Hopkins to face the winner of a June 21 fight between Anatoliy Dudchenko and Nadjib Mohammedi, there is an organization rule in place for Hopkins to take a unification bout against RING and WBC champion Adonis Stevenson should Stevenson get beyond a May 24 defense against Andrzej Fonfara, according to IBF President Daryl Peoples.

"Your mandatory defense will be due on or before July 26, 2014. Normally, the IBF would notify you approximately 60 days prior to your due date as to whom the mandatory challenger is and you will be required to negotiate the mandatory at that time," read the IBF's letter to Hopkins, provided to RingTV.com by Dudchenko's promoter, Main Events.

"However, due to circumstances beyond our control, the eliminator for the mandatory challenger cannot be completed until June 21, 2014. As soon as that fight is over, you will be notified to start negotiations with the winner. In the event you are unable to negotiate the mandatory, the IBF will call for purse offers to determine who will promote the fight, when and where."

But during a Wednesday interview with RingTV.com, Peoples said, "In the IBF, a unification takes precedence over the mandatory."

"Bernard's been ordered to commence negotiations. He is the champion," said Peoples. "He can ask to unify the titles without requesting an exception."

Already the oldest man to win a significant belt, doing so twice at the age of 46 and 48, respectively, the 49-year-old Hopkins (55-6-2, 32 KOs) became the oldest fighter to unify titles with a unanimous decision over 30-year-old Beibut Shumenov, whom he dropped in the 11th round on April 19 in Washington, D.C.

A hard-hitting 35-year-old Ukrainian nicknamed "The Gladiator," Dudchenko (19-2-1, 13 KOs) will face Mohammedi (34-3, 20 KOs) at the Mohegan Sun in their IBF eliminator at Pocono Downs in Wilkes-Barre, Pa., on NBC Sports Network's Fight Night.

Hopkins has designs on a bout with Stevenson for later this year — something Golden Boy Promotions CEO Richard Schaefer informed RingTV.com that he knew was within IBF rules — and beyond that, perhaps a fight with the WBO's titleholder Sergey Kovalev, Dudchenko's promotional stablemate with Main Events.

"Currently, Bernard Hopkins is under the delusion that he can just make his own rules, bypass his mandatory and go straight to a bout with Adonis Stevenson," said Dudchenko's manager, Vince Caruso in a prepared statement. "Anatoliy and Naj Mohammedi have earned the right to face each other in an elimination bout and the winner be rewarded with a title shot. We expect Mr. Hopkins, as a world champion, will comply with the IBF's rules."

During an interview with RingTV.com, Dudchenko also said he had no plans of missing out on a shot of Hopkins should he defeat Mohammedi.

"My management team is focused on this fight with Najib Mohammedi first. After that, we can see what happens with Hopkins," said Dudchenko, who stands 6-foot-3, takes a 16-fight winning streak that includes 10 knockouts into his clash with Mohammedi, and has been trained by former heavyweight titleholder Chris Byrd, according to Caruso.

"He thinks I am not relevant and that the IBF will just let him fight an Adonis Stevenson unification. I tell you this…I only fight for the IBF. This is the true champions' title…when I finish business with Mohammedi, I will hold Hopkins to defend the title with me. I have no plans to step aside for any amount of money. I started boxing for legacy, not finance. When I am long gone, I want people to remember me for my battles, not my bank account."

But it appears Hopkins will get his way if he wants to face Stevenson instead of the winner between Dudchenko and Mohammedi.

"As soon as their fight is over, he'll be ordered to begin negotiations," said Peoples. "But he can ask to unify the titles and that would take precedence over his mandatory."