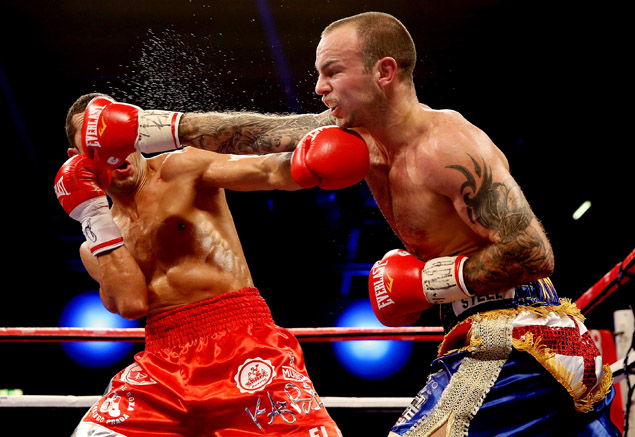 Kevin Mitchell (37-2, 27 knockouts) will pursue his fourth straight knockout and his fifth consecutive victory against Ghislain Maduma (16-0, 10 KOs) in clash of 29-year-olds in an IBF lightweight title eliminator on the May 31 undercard of the rematch between IBF super middleweight titleholder Carl Froch and George Groves at Wembley Stadium live on Sky Sports, Matchroom Sport announced on Tuesday.

Mitchell has not lost since falling by fourth-round knockout to then-WBO beltholder Ricky Burns in September of 2012 and was last in action for last month's second-round stoppage of Mikheil Avakyan.

"This fight carries huge risk but also huge rewards," said Eddie Hearn of Matchroom Sport regarding a fight whose winner becomes the mandatory challenger to IBF titleholder Miguel Vazquez. "I strongly believe that Kevin can beat Vazquez but he has a massive test in Maduma first at Wembley. Maduma is technically very good and can punch with both hands but Kevin has boxed four times in seven months and is ready to enter deep waters. It's going to be a cracking fight."

In their first fight in November, Froch rose from a first-round knockdown to win by disputed ninth-round stoppage over Groves.

Also on the Froch-Groves card is a bantamweight bout between Jamie McDonnell and Tabtimdaeng Na Rachawat, an IBF 168-pound eliminator featuring James DeGale against Brandon Gonzales and Olympic Gold medal winning heavyweight Anthony Joshua will look to improve to 6-0 with as many knockouts against an opponent to be determined.

Three-time, two-division titlewinner Randall "KO King" Bailey will return to action on June 7 against unbeaten welterweight Frederick Lawson of Ghana at Myth Event Center in St. Paul, Minn., according to a release by his manager, Si Stern.

The 39-year-old Bailey (44-8, 37 KOs) was last in the ring for a disqualification victory over Humberto Toledo in November that followed his unanimous decision loss to southpaw Devon Alexander that dethroned him as IBF titleholder in October 2012.

"I want to build myself back up in the eyes of the public after my fight with Devon. His style didn't match with mine. I know I came to fight but all he did was tap and run. He should have told me that before we signed to fight instead of him saying he was going to break my ribs and knock me out," said Bailey.

"He punched like he was scratching. I'm disgusted with that fight. All I felt was his little taps. I'm still frustrated. Being a veteran, I should have come in and did everything possible to win. I like to fight. If I lose, I'd rather get my ass beaten instead of losing that way with him tapping and running."

Prior to Alexander, Bailey scored a come-from-behind 11th-round knockout of Philadelphia’s Mike Jones on the undercard of Tim Bradley's disputed split decision over Manny Pacquiao in June 2012.

The win over Jones was Bailey’s fourth straight victory, having previously suffered his last defeat by 11th-round stoppage against Juan Urango in a failed bid to earn the IBF’s junior welterweight belt in August 2009.

The 24-year-old Lawson (22-0, 20 KOs) was last in the ring for last month's sixth-round technical knockout of Mohammed Kayongo.

"I don't know too much about him [Lawson] yet," said Bailey, "other than he is undefeated and was Manny Pacquiao's sparring partner. I'm ready for a good fight."