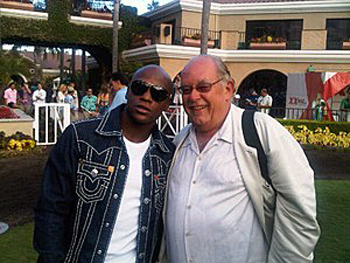 Floyd Maywether Jr. juxtaposes his lavish lifestyle against the Spartan workouts of his Las Vegas-based gym even as he takes criticism from Manny Pacquiao fans during an evening on the town in Las Vegas during Saturday's second of four 30-minute episodes of All Access: Mayweather vs. Maidana in advance of his May 3 Showtime Pay-Per-View main event against Marcos Maidana at the MGM Grand.

During the opening scene, Mayweather tours his "Big Boy Mansion" with famous television personality Robin Leach, to whom Mayweather displays a table laiden with jewelry woth $5 million and a rack of diamond encrusted eye glasses.

"Hi, I'm Robin Leach, and welcome to the fabulous world of Floyd 'Money' Mayweather. Here, at the Big Boy Mansion, Floyd Mayweather, boxing's half a billion dollar man, lives a lavish and luxruious lifestyle," Leach says of Mayweather, who later drives his two Bugatti Veyrons, worth $3.2 million, and flies with several women in his private jet. "It's all part of the Mayweather movement. Let's run the names. Prada, Gucci, Christian Louboutin, necklaces, rings, Rolex watches. The fastest cars, and the baddest b–ches. Welcome to the fabulous world of Floyd Mayweather."

During a workout, Mayweather (45-0, 26 knockouts) insists that his riches have not quelled his hunger victory over Maidana (35-3, 31 KOs).

"I work hard. Every day," says Mayweather, 37, who will defend his RING and WBC welterweight championships against WBA counterpard Maidana. "I feel like I go into the gym and I work like I don't have a dime."

During one scene, several people encircle a patio where Mayweather is eating and chant Pacquiao's name, with one man and his female companion insinuating that Mayweather is "scared" to fight the eight-division titlewinner.

The situation is all in a day's events for Mayweather.