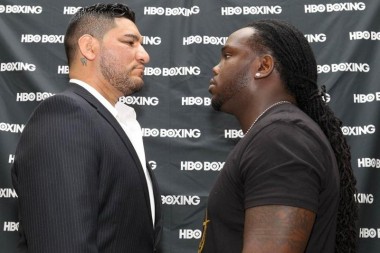 On Wednesday, 13 years to the day that Hasim Rahman knocked out Lennox Lewis to become an undisputed heavyweight champion, Bermane Stiverne and Chris Arreola held separate conference calls in advance of their May 10 rematch at the USC Galen Center in Los Angeles, Calif., for the WBC belt vacated in the retirement of Vitali Klitschko.

"Whatever I did in the first fight, I will do it better. Way better. We're getting ready for a new type of Arreola. So whatever Arreola shows up on May 10, I'll be able to handle that," said Stiverne of his opponent, whom he vanquished by unanimous decision in April 2013.

"To be honest, I think that this fight, if Chris is really in shape — and that was his excuse the last time– then I believe that Chris is going to bring the best out of me. That's how I see it. The more in shape that he is, the more trouble he's going to be in."

"To me, I didn't feel like I was the underdog the first time but I knew that people thought that I was when you're talking about the fans or the media. Arreola was a big favorite the first time," said Stiverne.

"But I've been watching Chris Arreola and I knew then and I know now still, today, that Arreola is tailor-made for me. I have the style and I'm able to use my knowledge to be smart in the ring. There are certain things that he can't do. To beat him, I just proved myself to people who thought it was impossible for me to beat him in the fight."

Wladimir Klitschko is THE RING, IBF, WBA and WBO champion. No U.S.-born fighter has held a heavyweight title since 2007, when Shannon Briggs briefly wore the WBO’s strap. In 2006, Rahman of Baltimore held the WBC belt while the IBF title was held by Chris Byrd.

Puerto Rican-American John Ruiz was the first Latino to have a belt when he became the WBA champ in 2001.

Stiverne is looking to become the first heavyweight champion of Haitian descent and the 33-year-old Arreola (36-3, 31 KOs), the first of Mexican descent, having rebounded from the loss to Stiverne with a first-round knockout of highly-touted Seth Mitchell in September.

"I want to be able to bring back the excitement that has been missed for so long since Mike Tyson or Lennox Lewis. There has not been too much excitement and I'm looking forward to bringing that back."

A Las Vegas resident for the past 10 years, Stiverne said he often trains at the Las Vegas-based gym of RING number one-rated pound-for-pound fighter Floyd Mayweather Jr., who will defend his RING and WBC welterweight championships against WBA counterpart Marcos Maidana on May 3 at the MGM Grand.

"Of course, I'm one of the original members of that gym, one of the first to go there. That pretty much changed my way of training and my career when I moved to that gym and saw Floyd training," said Stiverne of Mayweather, the world's highest-paid athlete over nearly the past three years.

"It's something that you've got to see with your own eyes. Mayweather is a man who has everything that he wants in the world yet he still trains just like he is still poor and like he's still hungry. So I'm very grateful to be around him and to be able to see him train. To me, it's just a plus to be around this type of individual and to be able to see one the best fighters in my era."

Stiverne-Arreola represents a crowded chase for the WBC's belt with the winner having been mandated to defend against Deontay Wilder (31-0, 31 KOs), who was last in the ring for last month's 96-second stoppage win over Malik Scott.

In addition, there was a second-mandatory ordered by the WBC between unbeaten fighters Mike Perez and Bryant Jennings on May 24, the winner of which will face that between Wilder and the victor of the Stiverne-Arreola matchup.

Also, 42-year-old southpaw Tony Thompson has appears to have revived his career, being that last month's split decision over Odlanier Solis was a bout for the WBC's vacant international belt.

Thompson informed RingTV.com on Tuesday that he is considering return bouts against either Carlos Takam of France on June 6 or Alexander Povetkin of Russia for June 7.

Arreola's other two losses are to Vitali Klitschko by 10th-round stoppage in September 2009 and to former cruiserweight titleholder Tomasz Adamek by majority decision in April 2010.

"I think that these two have been tried and tested whereas the other young fighters, they really don't know how good someone is until they have faced someone that we know is good," said Dan Goossen, who is co-promoting the event with Don King.

"Chris obviously has that distinction and Bermane got a taste of it in April of last year, so those are the obstacles for anyone that we're going to put a tag on being real contenders. That's what they have to go through before they can become real contenders."