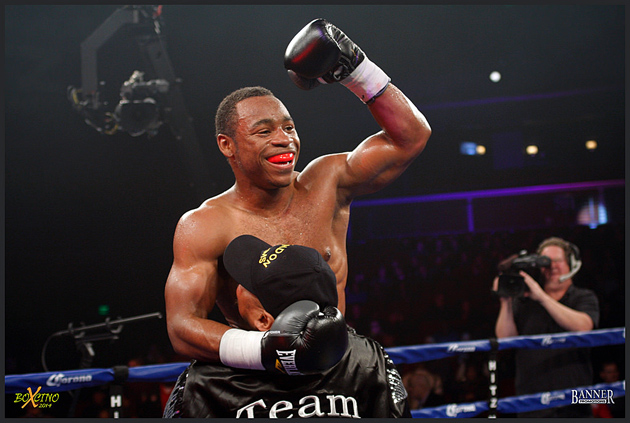 Brandon Adams and Willie Monroe Jr. will meet in the ESPN2-televised Boxcino middleweight finals on May 23 at the Turning Stone Casino in Verona, N.Y., the site of their semifinals victories on Friday. Adams outpointed Raymond Gatica. Monroe Jr. outboxed Vitaliy Kopylenko.

Adams (14-0, 9 knockouts), a 24-year-old boxer-puncher from Los Angeles, beat Gatica (14-3, 9 KOs) via split decision, winning by two scores of 78-74. Gatica, a 29-year-old southpaw from Austin, Texas, won by a 77-75 tally on the card of judge Wynn Kintz, who must have mistaked his forward-marching aggression and busier hands for effective punching.

In truth, Adams deserved the victory by landing the harder, more accurate punches and by controlling the action with his footwork and counterpunching.

Monroe Jr. (17-1, 6 KOs), a 27-year-old southpaw from Ithica, N.Y., also controlled the action of his semifinal bout against Kopylenko but he did so with more lateral movement. Monroe Jr., who won a unanimous decision by scores of 79-73 (twice) and 78-74, kept the game 30-year-old Ukrainian fighter at arms reach with his footwork, consistently beating Kopylenko to the punch with his jab.

Kopylenko (23-1, 13 KOs), who entered the Friday Night Fights-featured tournament as a favorite, stalked and launched the harder punches — two of which dislodged Monroe's mouthpiece in the fourth and fifth rounds — but was unable to consistently cut the ring off on the elusive lefty.