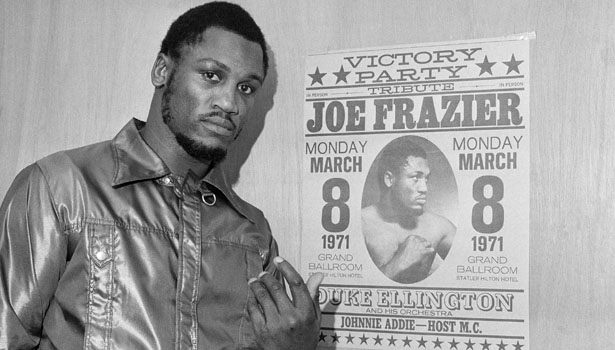 WASHINGTON, D.C. — Former fighter Marvis Frazier presented IBF light heavyweight titleholder Bernard Hopkins and Golden Boy Promotions with plaques on Thursday in appreciation of their role in funding the completion of a Joe Frazier statue that will stand nine feet tall outside of Xfinity Live in Philadelphia's sports stadium complex.

Marvis Frazier was in attendance at the Hamilton Live restaurant in Northwest, Washington, D.C., for the final press conference in advance of Hopkins' title unification bout on Saturday against WBA counterpart Beibut Shumenov that will be televised on Showtime from the D.C. Armory in Washington, D.C.

"This is for Bernard Hopkins because he loved Joe Frazier. Really, it's from the whole family. The entire Frazier family is grateful. It's long overdue," said Marvis Frazier during an interview with RingTV.com. "As a matter of fact, when he first started boxing, it was at The Joe Frazier's Gym. The rest was gold and championships."

Designed by local artist Stephen Layne and projected to be unveiled between Thanksgiving and Christmas of this year, the Joe Frazier statue will become part of Philadelphia's public works of art as voted on by Philadelphia's Art Commission and will mirror Frazier's reaction after knocking down Muhammad Ali during their 1971 title fight at New York's Madison Square Garden in New York City.

"Golden Boy Promotions, my sincere appreciation of your contribution to making the legacy of Joe Frazier possible," read the plaque for Golden Boy, depicting Frazier wearing a black cowboy hat, a suit and a silver tie. "This award is given to your organization from an appreciative son and heavyweight champion. Thank you, Marvis Frazier."

Richard Schaefer, CEO of Golden Boy, told Marvis Frazier and his cousin, Joe Frazier, that he used to steal away in his native Swizterland to watch Frazier, Muhammad Ali and others in the wee hours of the morning.

"To immortalize one of the best fighters of all time and a terrific man outside of the ring as well, I think is the right thing to do. I'm happy that we could play a small role in it," said Schaefer. "Bernard actually made us aware of it and we immediately said that we were going to do this together because we thought that it was the right thing to do."

While the Hopkins-Shumenov Showtime tripleheader will begin at 9 p.m., ET/PT and include a welterweight bout between IBF beltholder Shawn Porter and Paulie Malignaggi and WBO middleweight titlist Peter Quillin's defense against Lukas Konecny, Ali, Ochoa and Browne will be seen on Showtime Extreme beginning at 7 p.m., ET/PT.

A 25-year-old nicknamed "World Kid," Ali was last in the ring for a sixth-round stoppage of Jesus Selig in December. Ali is being matched opposite Michael Clark (44-9-1, 18 KOs).

"We're used to working with each other, me and Zachary and Marcus," said Ali. "So to be on this card with Hopkins, Paulie Malignaggi and Shawn Porter as well, it's beautiful. We're just excited and we're ready to shine."

"I've been to D.C. before but I've never fought here," said Browne. "It's a beautiful thing to be fighting on the same card as my brother, Sadam Ali."

"It's great to come down here with Sadam and Marcus. I know both guys," said Ochoa. "We're coming down here to Washington, D.C. and this is my first time ever being in D.C. We're looking for a successful night. It's historical also because of Bernard Hopkins."

In November 2013, the museum approved the inclusion of the Hopkins and Floyd Mayweather Jr. portraits into the museum's collection and they will be included within the next two to three years and be displayed for six months or more.

Mayweather, who turned 37 in February, will defend his RING and WBC championships against WBA counterpart Marcos Maidana on May 3 and receive his portrait on April 30 in Las Vegas on Showtime Pay-Per-View.

Keifel is an accomplished name in the world of photography, having focused on boxing from 2002-2010 and compiled a collection of over 250 black-and-white portraits for his book "Box: The Face of Boxing", published in 2010.

The book included photos of fighters such as Mayweather, Mike Tyson, Evander Holyfield, Hopkins and Oscar De la Hoya. Keifel's boxing work has been featured in several institutions but these will be his first portraits to hang in the National Portrait Gallery.

The Portrait Gallery's collection includes images of some of the most prominent boxers and fights in the history of the sport. Among them are images of Holyfield, Muhammad Ali, Jack Dempsey, Rocky Marciano and Joe Louis.

The D.C. Armory is playing host to its third fight since February 2013, when it hosted an eighth-round knockout of ex-beltholder Kendall Holt by IBF titleholder Lamont Peterson. Peterson returned to the D.C. Armory for a unanimous decision over Dierry Jean.

"I actually have some pretty good ideas for what we're going to bring back here to Washington, D.C. in the summer, so count on that. You've heard about the Armory. For those of you who have not been there yet or seen it yet for boxing, you definitely have to go there. It's built for boxing. When I was watching the last show on television, it just looks fantastic and it comes across so well," said Schaefer.

"It's a great experience for the people in the venue. We have been very active in Brooklyn, New York and of course, Los Angeles and in San Antonio, Texas as well, and of course in Las Vegas. But I would put Washington, D.C. today right there in that mix. That is because of the fans that you have here and how supportive they are to Golden Boy when we've been bringing these big fights into Washington, D.C."

Collado will face Salka on Showtime's ShoBox: The New Generation in an event promoted by Mike Tyson's Iron Mike Productions at the Convention Center in Monroeville, Pa., just outside Pittsburgh before Salka's partisan fans.

Manny Pacquiao's unanimous decision over Tim Bradley last Saturday generated nearly $1.1 million less in ticket sales than Bradley's split decision victory over Pacquiao in June 2012, representing Pacquiao's worst gate performance in the past eight Las Vegas-based fights dating back to his knockout of Oscar De la Hoya in December 2008, according to a report by ESPN.com.

Citing the Nevada State Athletic Commission, ESPN.com reported that Pacquiao-Bradley II generated a live gate of $7,865,100 from 14,099 sold tickets at the MGM Grand Garden Arena in Las Vegas, with 894 unsold tickets and 926 complimentary tickets from the 15,919 available.

"As President of Jean Pascal Promotions," Pascal remarked, "I have many new challenges ahead of me but like I've done many times before, I plan on making history both inside and outside of the ring. I will be taking on the best challenges and give the fans their money's worth like I always do but this time I will be doing so as a promoter and a boxer."

"This opportunity is like a dream come true for me. I'm very excited about working with and learning from Groupe Yvon Michel and Interbox to make our events something the fans will never forget. I have to thank Yvon Michel, Jean Bedard and Jean Pascal Promotions CEO Greg Leon for making this deal possible. The rest of my staff – Antonio Decarie, Feymie Ze Lou and Raven Brosier – deserve great thanks also for being involved on every step of this new journey.