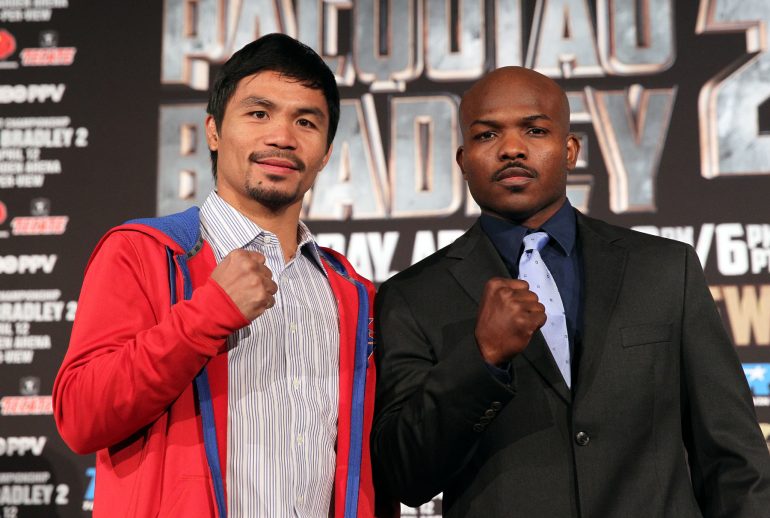 On Monday, Canadian Craig Metcalfe was named to replace England's John Keane as a ringside judge for the April 12 rematch between Manny Pacquiao and WBO 147-pound beltholder Tim Bradley. Keane withdrew due to illness.

According to The Las Vegas Review Journal, Metcalfe, who has worked neither Bradley's nor Pacquiao's fights, was named by Nevada State Athletic Commission Chairman Francisco Aguilar after having consulted with both camps.

The other judges for Bradley-Pacquiao II are Glenn Trowbridge of Nevada and Michael Pernick of Florida. Kenny Bayless will be the referee.

Bayless was the third man in the ring for Pacquiao's sixth-round stoppage loss to Juan Manuel Marquez in December 2012 at the MGM Grand Garden Arena, site of Saturday's return bout as well as the venue where Bradley defeated Pacquiao.

Bradley was awarded the controversial decision over Pacquiao by scores of 115-113 on the cards of official judges C.J. Ross and Duane Ford. Jerry Roth had the same score for Pacquiao and an informal poll of 51 writers favored Pacquiao over Bradley, 48-3.

Bayless and all three judges will be working a Bradley fight for the first time.

Bayless also worked the second matchup between Pacquiao and Marquez, who was dropped in the third round of his split decision loss at junior lightweight in March 2008. Pacquiao is 2-1-1 against Marquez, having rebounded from that last defeat with November's unanimous decision over Brandon Rios.

Trowbridge scored Marquez's majority decision loss to Pacquiao in their third bout, 116-112 for Pacquiao, and will be working a Pacquiao fight for the sixth time. Pernick scored Pacquiao's unanimous decison over Rios a shutout at 120-108.