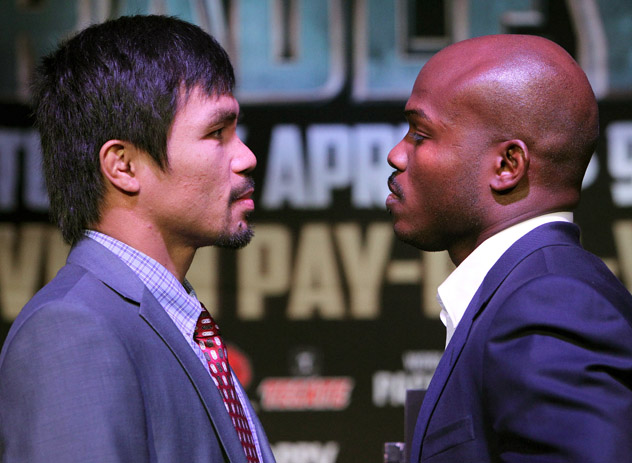 The second of three episodes of HBO's telecast of 24/7: Pacquiao-Bradley II airs Saturday at 11:30 ET/PT in advance of the April 12 rematch between WBO welterweight beltholder Tim Bradley and Manny Pacquiao.

In his past three fights, Bradley dethroned Pacquiao by split decision in June 2012, rose from a 12th-round knockdown to unanimously decision Ruslan Provodnikov in March 2013 and then won a split decision over four-division titlewinner Juan Manuel Marquez last October.

Pacquiao will make the eighth appearance of his career on ABC's “Jimmy Kimmel Live” tonight, along with former President Bill Clinton.

A congressional representative of the Sarangani province in his native Philippines, Pacquiao's annual berth on the show will come in advance of his April 12 rematch with Tim Bradley, who dethroned Pacquiao as WBO beltholder by split decision in June 2012.

The 35-year-old Pacquiao's last time on Kimmel's show was in late November 2012, just prior to his loss to Marquez.

A southpaw who once reigned as WBO beltholder, Braehmer (42-2, 31 KOs) has won 11 consecutive fights, six of them by knockout, since falling by Hugo Hernan Garay in November 2008.

Braehmer was last in the ring in December, when he floored Marcus Oliveira in the 10th round of a unanimous decision for his current belt, the WBA's "world" title [Note: THE RING recognizes only one champion per sanctioning body per division, which in this case is WBA “‘super’ world” light heavyweight titleholder Beibut Shumenov].

"Maccarinelli can let his fists fly as much as he wants," said Braehmer, 35. "I will be the one landing the decisive punches and that is all that matters. The WBA world title will not change hands but my hand will be raised on Saturday."

Maccarinelli (38-6, 30 KOs), of Wales, has scored three consecutive knockout victories since being stopped in the second round by Ovill McKenzie in November 2012.

Maccarinelli's winning streak includes an 11th-round knockout of McKenzie last August and a seventh-round stoppage of Courtney Fry in December. Still, Maccarinelli, 33, has been stopped in all of his losses including those as a cruiserweight to David Haye, Ola Afolabi, Denis Lebedev and Alexander Frenkel.

Maccarinelli won the WBO cruserweight title in a ninth-round stoppage of Marcelo Dominguez in July 2006 and made four successful defenses.

"It is an honor to get the chance fighting again for a world championship. I respect Braehmer," said Maccarinelli, "but he won his last fights because his opponents were afraid to press the action against him. I am different. I have the mentality of a world champion. Do not blink as soon as the first bell rings."

Canadian middleweight David Lemieux will pursue his seventh straight win and his sixth knockout in his current streak against an opponent to be determined on the May 24 Adonis Stevenson-Andrzej Fonfara card in Montreal, Quebec, Canada on Showtime, promoter Yvon Michel announced earlier this week.

The 25-year-old Lemieux (31-2, 29 knockouts) was last in the ring for a seventh-round knockout of Jose Miguel Torres in November, having rebounded from consecutive losses to Marco Antonio Rubio and Joachim Alcine by seventh-round stoppage and majority decision in April and December 2011, respectively.

"David will be in the co-feature of the Stevenson-Fonfara fight," said Michel. "We're working on his opponent now. We have somebody in mind who has not signed yet but we should be able to announce that early next week."

"I am fighting @hughiefury on the undercard of @dellboychisora vs @Tyson_Fury," Chambers wrote.

Chambers (37-4, 19 KOs) celebrated his 32nd birthday with Saturday's sixth-round knockout of Tomas Mrazek, and is scheduled to face Ian Lewison on April 12 in advance of Fury, according to Boxrec.com. The 19-year-old Hughie Fury (13-0, 8 KOs) is slated to face Danny Hughes on April 12 in pursuit of his third consecutive stoppage win.

Chambers-Lewison and Fury-Hughes are slated for Copper Box Arena in London.

Soliman's unanimous decision over Sturm in February of last year was later overturned and changed to a no contest after Soliman tested positive for a banned substance.

Soliman, 40, has fought once since then, scoring a ninth-round stoppage over Les Sherrington in December.

Sturm, 35, has scored knockouts in the fourth and second rounds over Predrag Radosevic and Darren Barker in July and December. Sturm stopped Barker for his current belt.