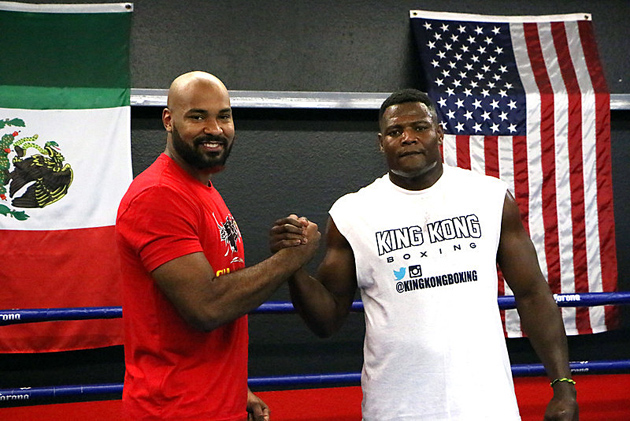 The Golden Boy Live! card, entitled "The Night of The Heavyweights," will be televised on Fox Sports and Fox Deportes, and will also feature 2012 U.S. Olympian Dominic Breazeale, an undefeated heavyweight prospect.

"I've had a great training camp," said Washington, who stands 6-foot-5. "I've had a long time to prepare. I've been working hard and we're ready to go. I know that he's a big guy that comes forward and that he tries to be aggressive. He's 6-foot-8 and 270 pounds, so I'm looking forward to fighting someone bigger than me for the first time.

"It's going to be fun. I'm excited about being the co-main event this Thursday. These fights are preparing for bigger and better things. My career as a professional boxer is progressing and I'm ready to go for anything that comes my way. For now all I can say is that Thursday is going to be exciting."

A 35-year-old southpaw who stands 6-4, Ortiz scored his fifth consecutive knockout against Alex Gonzalez in his last fight, doing so in the first round in November.

"I know that my opponent has a lot of experience. At the professional level, you need to overcome experienced champions and continue moving forward and overcoming obstacles," said Ortiz.

"I respect him as all boxers deserve respect but my thoughts are about being a world champion and being the best boxer in the world, I am the next champion of the world, and this Thursday, I am surely going to be victorious."

Welterweight Alan Sanchez will face Jorge Silva in the main event of a Golden Boy Live! show on April 18 from the Illusions Theater at the Alamodome in San Antonio, Texas, to be televised on Fox Sports 1 and Fox Deportes.

A 23-year-old from Fairfield, California, Sanchez (12-3-1, 6 knockouts) was last in the ring for September's unanimous decision loss to ex-beltholder Luis Collazo, a southpaw whose most recent victory was a second-round knockout of Victor Ortiz in January.

Silva (20-5-2, 16 KOs), 22, has lost three of his last four bouts, including a seventh-round knockout against Silverio Ortiz last November.

In the co-main event, 2012 U.S. Olympian Errol Spence Jr. (11-0, 9 KOs), 24, will pursue his third straight knockout win against a welterweight opponent to be determined.

The event is being co-promoted by Leija-Battah Promotions, and will feature a card on Thursday at The Alamodome as well.

"We are having two big nights of boxing in the Alamodome April 17 and 18," said Mike Battah, co-promoter with retired titlewinner Jesse James Leija. "On Thursday we will have over 14 professional bouts, and on Friday, before the pro bouts, we are putting 30 amateur bouts."

Cuban-born light heavyweight Sullivan Barrera (10-0-0, 6 KOs) will make his Main Events' debut against Larry Pryor (7-8, 4 KOs) on the undercard of  Friday's heavyweight bout between Steve Cunningham and Amir Mansour at the Liacouras Center in Philadelphia, PA.

KUBRAT PULEV TO FACE AN OPPONENT TO BE DETERMINED ON SATURDAY

Unbeaten heavyweight Kubrat Pulev (19-0, 10 KOs) will return to action on Saturday against an opponent to be determined on the undercard of a main event featuring WBA light heavyweight titleholder Juergen Braehmer against Enzo Maccarinelli at the Stadthalle, Rostock, Mecklenburg-Vorpommern, Germany, Sauerland Events announced on Tuesday.

An IBF mandatory challenger, Pulev, 32, was slated to face Elijah McCall (12-3-1, 11 KOs) before the son of former heavyweight titleholder Oliver McCall pulled out of the bout.