May 2014 issue of THE RING Magazine: On sale now 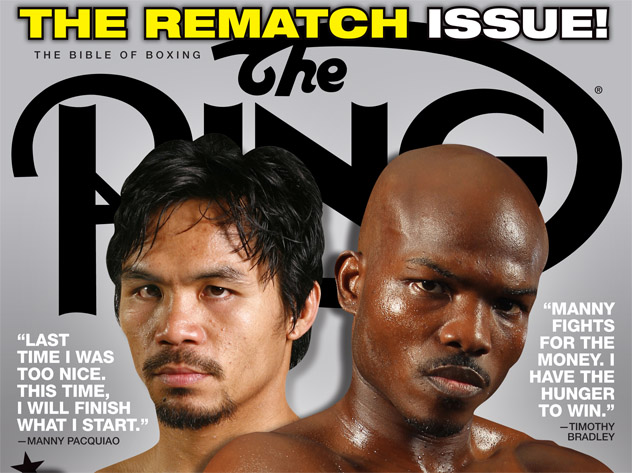 For Manny Pacquiao, it’s an opportunity to right a wrong and also remove any doubt that he remains an elite force. For Tim Bradley, it’s a chance to prove that his victory in their first fight was no fluke.

For the rest of us, the Pacquiao-Bradley rematch is a compelling matchup of two unusually good fighters on April 12 in Las Vegas.

Pacquiao lost their first meeting by a controversial decision; most of those who watched believed the Filipino hero was robbed. Since then, he was stopped by Juan Manuel Marquez but rebounded to dominate Brandon Rios.

Bradley went toe to toe with Ruslan Provodnikov and survived to win a decision before outpointing Marquez in perhaps his finest performance. 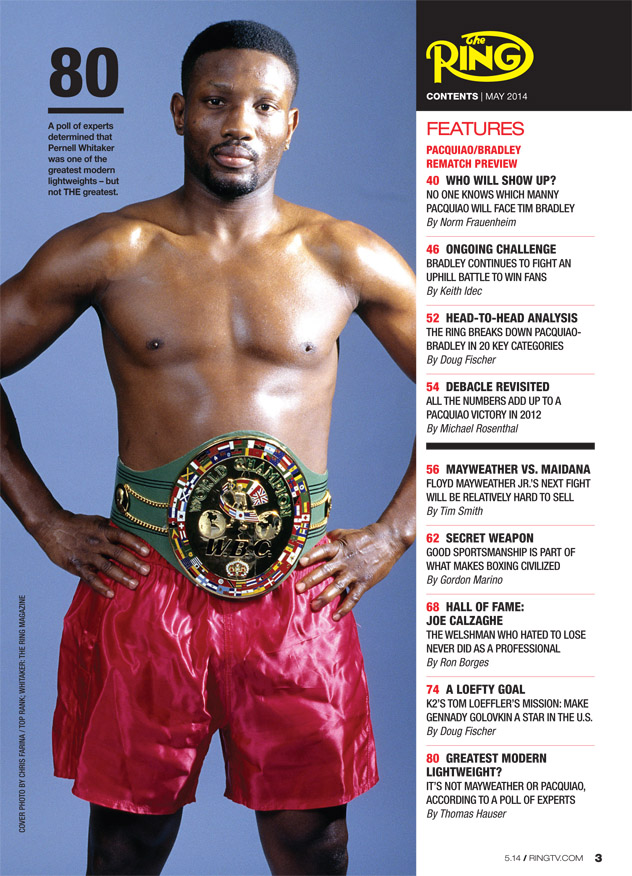 The rematch has a number of storylines, which we present in a preview package featured in the May 2014 issue of THE RING Magazine.

In Indentity Crisis, Norm Frauenheim writes that we can’t be sure which Pacquiao will show up for what is expected to be a much sterner test than Rios, the dominating tour de force of the past or a faded facsimile.

Keith Idec writers in Futile Endeavor? that Bradley has failed to connect with fans on a large scale in spite of his considerable success.

RingTV.com Editor Doug Fischer breaks down the fight as only he can in our head-to-head analysis.

And, in Debacle Revisited, we take a look back at the CompuBox statistics, official scoring and the cards of boxing experts and ask: How did Bradley end up winning a decision in the first fight?

Also in the May issue, Tim Smith writes in Tough Sell that Floyd Mayeather Jr. will be hard pressed against Marcos Maidana on May 3 to approach the success of his record-setting clash with Canelo Alvarez. …

Gordon Marino writes in R-E-S-P-E-C-T that one of the main things that makes boxing civilized is good sportsmanship, which we don’t always see in abundance. …

In Perfection, Ron Borges takes a look back at the remarkable career of Joe Calzaghe, who will be inducted into the International Boxing Hall of Fame in June. …

In In Good Hands, Fischer writes about K2’s Tom Loeffler’s efforts to make Gennady Golovkin a star in the U.S.

In The Greatest Modern Lightweight?, we present the results of Thomas Hauser’s poll of 26 experts. Who is No. 1? Hint: He fought in a mind-boggling five decades.

And Frauenheim writes in The Natural that Los Angeles Dodgers first baseman Adrian Gonzalez might’ve been a successful pugilist had he not become a star baseball player.

The May 2014 issue of THE RING Magazine is on newsstands now. Or you can buy it – or subscribe to the magazine – by clicking here.