Rod Salka gets ‘second chance’ in hometown vs. Alexei Collado 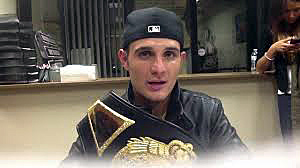 Rod Salka Jr. was last in the ring in December, when he lost a junior welterweight bout against Ricardo “Dinamita” Alvarez, the 32-year-old older brother of Mexican star Saul "Canelo" Alvarez, by disputed majority decision at the Alamodome in San Antonio, Texas.

The bout represented the American debut for Alvarez in support of the main event featuring Marcos Maidana's unanimous decision that dethroned Adrien Broner as WBA welterweight titleholder on Showtime. His younger brother was sitting at ringside.

At his hotel, later that night with cornermen Paul Spadafora, Buzzy Garnic, Ron Roule and Rod Salka Sr., Salka lamented the lost opportunity based on the judges' cards, one of which scored it even at 95-95.

But a new development has breathed new possibilities into the career of Salka (18-3, 3 KOs), who will face hard-hitting Cuban Alexei "The Hurricane" Collado (18-0, 16 KOs) of Miami, Fla., by way of Cork, Ireland, and Havana, Cuba, on Showtime's ShoBox: The New Generation.

Promoted by Mike Tyson's Iron Mike Productions, Collado-Salka will be hosted by the Convention Center in Monroeville, Pa., just outside Pittsburgh, before Salka's partisan fans on April 18.

"[Collado]'s a good fighter, so I feel like if I do what I've got to do here and if I take care of business, who knows what can come out of it? They're making it for a WBC-affiliated belt, so that would put me right in there. I would have two good fights that were on Showtime if I win this fight and that will put me right where I would have been had I won the last fight."

"To be in the main event is great. It's a catchweight fight at 133 and this guy has fought a lot lighter, so he's coming up in weight. The hometown thing is just by chance," said Salka.

"They wanted to do a show here anyway and they wanted some local guys on the card, so I'm in the same situation I'm in before with the last fight and I need to take advantage of it, win the fight and see where we can go from there. It's crazy."