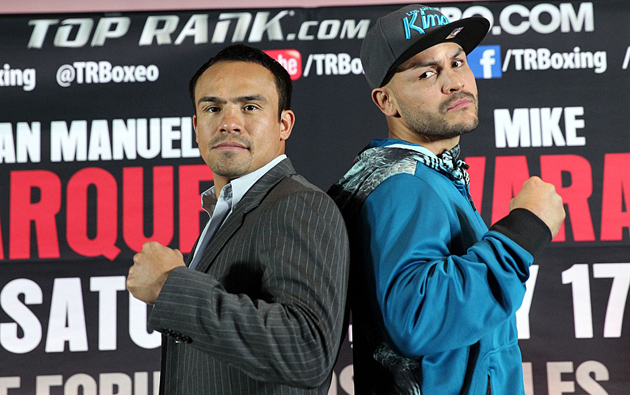 INGLEWOOD, Calif. – Once Juan Manuel Marquez decided that he was going to continue his boxing career, it made sense that the 40-year-old future hall of famer return to the venue where he established his name among hardcore U.S. boxing fans almost 20 years ago.

Marquez is sticking around to make history, so why not do so at The Forum, one of Southern California’s most historic venues for sports and entertainment?

Marquez, who has won major titles at featherweight, junior lightweight, lightweight and junior welterweight (while taking on the best fighters of the previous two decades), appeared ready to quit the sport after dropping a split decision to Tim Bradley last October.

He wanted to be the first Mexican boxer to win major titles in fight weight classes. Bradley, who holds the WBO welterweight title, denied him that history. But being the kind of man he is, Marquez wants another shot at it.

To do that, he has to beat Mike Alvarado on May 17 at The Forum, the recently revamped arena known around the world as home to the Los Angeles Lakers during the NBA franchise’s “Showtime” era. However, it also hosted some of boxing’s most legendary fighters during the 1970s, ‘80s and ‘90s.

Marquez, and fellow future hall of famer Marco Antonio Barrera, were fierce young prospects from Mexico City who were developed into top contenders fighting at The Forum in the early-to-mid 1990s.

“There are so many memories for me here,” Marquez, who fought at the venue 12 times, told reporters during a Tuesday press conference at The Forum.

“I fought (U.S. Olympian) Julian Wheeler here. I won my first professional title (the NABO featherweight belt) and defended it many times here.”

No title is on the line with the Alvarado fight, which will be televised live on HBO, but the winner of the scheduled 12-round bout has been promised a shot at the winner of the April 12 Bradley-Manny Pacquiao rematch by the WBO.

Marquez says he doesn’t care which nemesis he has to face later this year, he just wants his hands on that 147-pound belt.

“I took this fight because I’m looking for that fifth title,” he said. “That’s why I did not choose to fight (Ruslan) Provodnikov. He has the WBO 140-pound title. I already had that title. That’s no good for me. I want to make history.”

More than a few fans think Provodnikov, who brutally beat Alvarado into a 10th-round submission to win the WBO junior welterweight belt last October, is no good for Marquez for health reasons – never mind history.

But Marquez doesn’t have a walk in the park with Alvarado, a large and capable natural junior welterweight who will probably be a lot stronger fighting above 140 pounds (their match is set at a 143-pound catchweight).

Marquez envisions a tough fight with the 33-year-old Colorado native, the kind that fans who used to fill The Forum relished.

“I expect a great fight,” he said. “Mike Alvarado has strength and a difficult style. I have to prepare myself very well for this fight. This is a challenge, the kind I like. I want to make history, but the present, May 17, is more important to me right now.”

The fight with Marquez is undoubtedly the most important professional bout of Alvarado’s 10-year career.

“Coming off the loss to Provodnikov, it’s an honor for me to be able to redeem myself against a legend,” Alvarado said. “Redemption, that’s my motivation. This is only going to make me a better fighter and a better man.

“This fight is going to go down in the books.”

The matchup – which pits Marquez’s superior technique and vast experience against Alvarado’s size, strength, youth (and underrated skills) – is a good one. Neither fighter is lacking in the heart department.

However, it remains to be seen if the fight lives up to the many notable bouts that have been hosted by The Forum.

Olivares won the world bantamweight title from Lionel Rose there in 1969. The ultra popular Mexican boxer-puncher fought his multi-bout series with Chucho Castillo and Chacon at The Forum.

Napoles won the world welterweight title from Curtis Cokes and defended it against Griffith there in ’69. One of the Mexico-based Cuban’s title defenses against top-10 contender Ernie “Indian Red” Lopez and his title-regaining victory over Billy Backus took place at The Forum.

The Ali-Norton rematch, which was co-promoted by Bob Arum, who is promoting Marquez-Alvarado, took place there in 1973.

Little Red Lopez’s knockouts of Olivares, Sean O’Grady and Art Hafey were there in 1975 and ’76.

Zarate won the WBC bantamweight title from Rodolfo Martinez at The Forum in ’76 and also staged his classic shootout with fellow KO king Alfonso Zamora at the storied venue in ’77.

Chavez made his first ever title defense against Ruben Castillo (who later became a TV commentator for Forum shows) there in 1985, and the Mexican icon defeated Roger Mayweather there in ’89.

Marquez-Alvarado will be on Championship Boxing (Marquez’s first appearance on regular HBO in four years). It won’t be kicking off any new TV series, but it may herald boxing’s permanent return to The Forum (talks for a July 19 showdown between Julio Cesar Chavez Jr. and Gennady Golovkin at the venue are reportedly going well).

That’s more than enough for now.

Tickets for Marquez-Alvarado, priced $35 to $400, go on sale at The Forum box office and via Ticketmaster on April 1, starting at 12-noon PT. For a limited time, fans who purchase $75 and $150 tickets will receive one complimentary ticket of equal value.