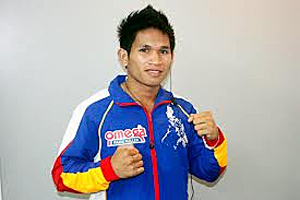 Paulie Malignaggi calls upcoming rival Shawn Porter "pretty basic," even as the younger, more muscular IBF welterweight titleholder has said he plans to walk through Malignaggi on April 19 in defense of the belt he won from Devon Alexander in December.

"People talk about…and I've heard [Porter] talk about how he's going to do the same thing to me that he did to Alexander and that he's going to come forward. If his only game plan is to walk through me, then he's going to have a lot of problems," said Malignaggi, 33.

"Because I think that everybody's game plan is to walk through me. They say that I can't punch and they just come in assuming that I'm not strong and that I'm not a big puncher and that they're going to come right through me. But then, when you get into the fight, it's a whole different animal in front of you."

Porter-Malignaggi will be the second fight featured on a Showtime-televised card headlined by a 175-pound IBF/WBA unification title bout between Bernard Hopkins and Beibut Shumenov.

Hosted by the D.C. Armory in Washington, D.C., the card will also include Peter Quillin's third defense of his WBO middleweight title against Lukas Konecny.

Broner represented Malignaggi’s first loss since falling by 11th-round stoppage to Amir Khan as a junior welterweight at New York’s Madison Square Garden in May of 2010.

The 26-year-old Porter (23-0-1, 14 knockouts) left Alexander bleeding from cuts over his eyes, ending Alexander’s winning streak at four consecutive bouts since falling to Tim Bradley, the current WBO 147-pound beltholder, in January of 2011.

A former junior middleweight managed and trained by his father, Kenny, Porter’s victory over Alexander was preceded by last September’s unanimous decision over ex-beltholder Julio Diaz, with whom Porter had battled to a draw in December 2012.

"What I've seen from Shawn Porter, he's pretty basic," said Malignaggi. "He's got some power but there's no intangibles. The intangibles are that he's got a lot of heart and he's good and you can't teach that. But as far as physical talent, there's not a lot there that I can see."

Prior to Broner, Malignaggi had five straight welterweight wins, two within the distance, and was coming off a split decision victory over Pablo Cesar Cano in October 2012 at Barclays Center on Showtime, the network for which he is employed as a ringside commentator.

In April 2012, Malignaggi earned the WBA's 147-pound belt with a ninth-round stoppage on the home turf of Ukrainian Vyacheslav Senchecneko, who was bigger, taller and boasted more power and who had worked, at times, with trainer Freddie Roach.

"I don't think that Shawn Porter brings anything into the ring that I haven't seen already," said Malignaggi. "And what he does have, you know, I've dealt with those kind of things and I know how to deal with it."