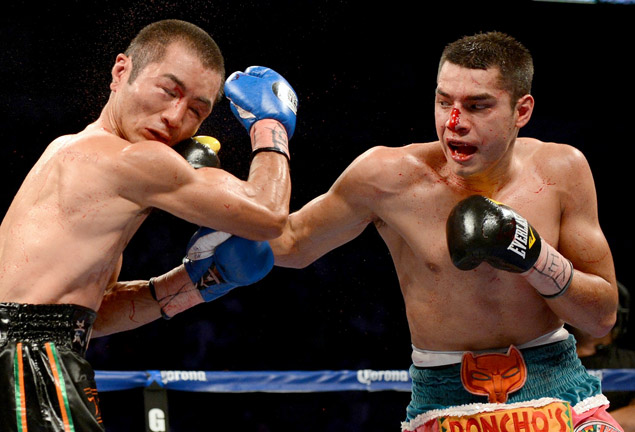 WBC lightweight titleholder Omar Figueroa Jr. will "be looking for payback" when he faces spoiler Jerry Belmontes in the opening bout of the Showtime-televised tripleheader on April 26 at the StubHub Center in Carson, Calif.

"He's beaten me three times from when we were in the amateurs," said Figueroa, a 24-year-old who, at 5-foot-8, is one-and-a-half inches shorter than Belmontes. "Now, I'm the bigger and stronger fighter and I just plan to hurt him as much as possible."

Figueroa (22-0-1, 17 KOs) will be in the opening bout of a card headlined by welterweight boxer-puncher Keith "One Time" Thurman against two-time lightweight titlewinner Julio Diaz, and THE RING's number one-rated junior welterweight Lucas Matthysse opposite rugged lightweight puncher John Molina.

March 8 was a banner night for the 25-year-old Belmontes (19-3, 5 KOs), who spoiled the U.S. debut of previously unbeaten Will Tomlinson of Australia.

"I've actually fought him before in the amateurs. This was more than a decade ago. When I was little, I played four sports at a time and I was 10 years old and I was playing football. I had broken my left elbow, so I had been out for a while. For about a year after that, I couldn't do much. After I came back, I was like 11, 12 years old, so I had all of that baby fat on me and I was sore and I hadn't had a growth spurt or anything," said Figueroa.

"So when I fought Jerry the first time, he was like two feet taller than me. So it was always an uphill battle for me. Even with that, I gave him a good fight. I fought him three times. A couple of those could have gone either way but [the judges] always gave him the fight because he was favored or whatever. Now, the tables are turned. Now, I'm the bigger and taller fighter, so I'm looking to get a little payback from over a decade ago."

Figueroa had to pull out of a scheduled March 8 defense against Ricardo Alvarez due to a hand injury but said his hand is recovering.

"The hand is getting progressively better. We've been working on it this whole time and it does feel a lot better. It didn't feel horrible this last time; it's just that, mentally, I wasn't feeling 100 percent. So that's one of the main reasons that we had to cancel the fight," said Figueroa.

"But this time, I'm feeling a lot more confident in my ability to use the hand. That's just mentally. Physically, it's coming around but that's what I was more worried about. I feel confident in throwing the left hooks to the body and to the head. So, slowly but surely, we're working it to the point that it's 100 percent."