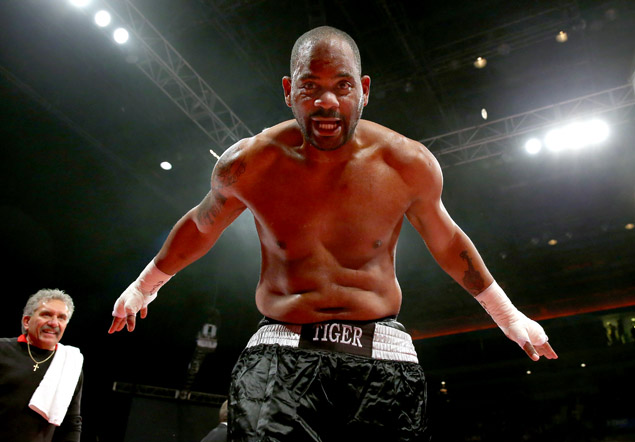 Heavyweight Tony Thompson, 42, will be fighting on foreign soil for the fifth straight time when he meets 2004 Cuban Olympian Odlanier Solis in Istanbul, Turkey on Saturday.

A 6-foot-5 southpaw from Washington, D.C., nicknamed "The Tiger," Thompson (38-4, 26 knockouts) was outhustled during a unanimous decision loss in August to Bulgaria's unbeaten Kubrat Pulev in his last fight in Germany.

The loss to Pulev ended Thompson's two-bout winning streak, comprised of stoppages of England's previously undefeated David Price in the second and fifth rounds in February and July of last year, respectively. Thompson rose from a second-round knockdown to win the latter.

Thompson's loss to Pulev was an IBF eliminator for the right to face RING champion Wladimir Klitschko, against whom Thompson has been stopped in 11th and sixth rounds during failed title challenges in July 2008 and July 2012.

Thompson had mounted a run of five consecutive knockout victories between the first loss to Klitschko, which was in Germany, and the second, in Switzerland.

Attempts to reach Thompson, who is currently in Turkey, were unsuccessful on Thursday.

“I’m feeling good and you don’t turn down a chance to get back to the championship,” said Thompson during an interview with RingTV.com prior to facing Pulev. “The more I fight, the better I am.”

Meanwhile, the 33-year-old Solis (20-1, 13 KOs) has won three straight since falling by first-round stoppage to then-WBC beltholder Vitali Klitschko, who has since retired. Solis suffered a damaged knee during the loss to Klitschko but is coming off a seventh-round stoppage of Yakup Saglam in July.

Welterweight Alan Sanchez will face Jorge Silva in the main event of a Golden Boy Live! show on April 18 from the Illusions Theater at the Alamodome in San Antonio, Texas, to be televised on Fox Sports 1 and Fox Deportes.

A 23-year-old from Fairfield, California, Sanchez (12-3-1, 6 KOs) was last in the ring for September's unanimous decision loss to ex-beltholder Luis Collazo, a southpaw whose most recent victory was a second-round knockout of Victor Ortiz in January.

Silva (20-5-2, 16 KOs), 22, has lost three of his last four bouts, including a seventh-round knockout against Silverio Ortiz last November.

In the co-main event, 2012 U.S. Olympian Errol Spence Jr. (11-0, 9 KOs), 24, will pursue his third straight knockout win against a welterweight opponent to be determined.