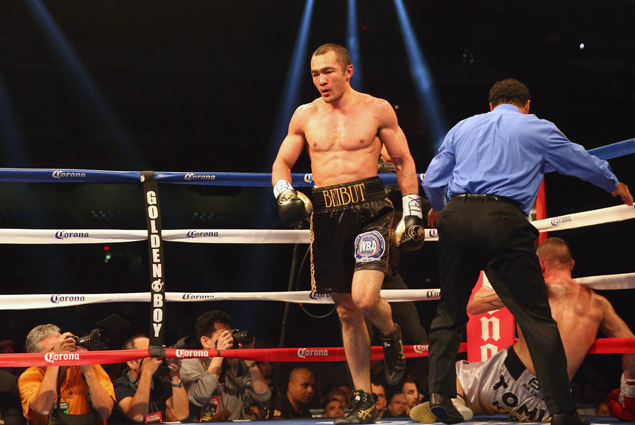 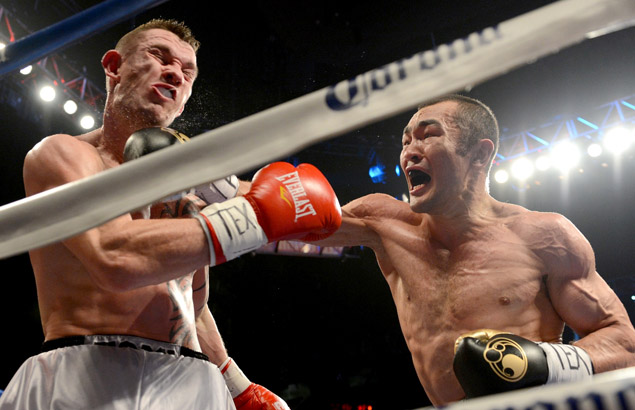 WASHINGTON — Beibut Shumenov said he won't fight dirty under any circumstances against Bernard Hopkins during their 175-pound unification bout on April 19 in Washington, D.C.

Shumenov has watched Hopkins' unanimous-decision victory in October, during which he was roughed up as Karo Murat often fired low blows and hit the older man when he was down.

In October 2011, Chad Dawson slammed Hopkins to the canvas, injuring the aging warrior's left shoulder during an eventual no-contest bout that was initially ruled a technical knockout.

Hopkins wouldn't blame Shumenov to fight him like Murat and Dawson did. In fact, he expects it.

"I believe that if I think like them, then it's, 'I'm fighting a 49-year-old, I don't care how great of shape Bernard Hopkins is in,' or how much they admire me," said Hopkins, who turned 49 in January. "It's, 'He's 49 years old,' and you're 30 years old, their mentality is that 'You have to fight and make him fight harder than he wants to fight.' That's the plan. That's no secret. Why would you dance and buy time? For what?"

But during Tuesday's press conference at the W Hotel in downtown Washington, DC., Shumenov insisted that he won't to resort the to behavior similar to Murat and Dawson when he meets Hopkins at The D.C. Armory on Showtime.

"I'm not going to do any dirty tactics, because it's boxing, and boxing has the rules. I'm a good wrestler, I'm a good kick boxer. I'm a good street fighter," said Shumenov, 30, who studied tae kwon do starting at age six and later, karate, wrestling, kick boxing and muay thai.

"But I love boxing, and everybody has to follow the boxing rules. So I'm not going to do any kinds of dirty tactics. It may be a sitaution where maybe the referee doesn't see it, but the world will see that, and I don't want to get any kind of bad reputation out there for those kinds of tactics, so I'm not going to do it."

A 30-year-old 2004 Kazakhstan Olympian living in Las Vegas, Shumenov (14-1, 9 knockouts) will match his WBA belt against the IBF title owned by Hopkins, who said he is "not looking past" Shumenov as much as "looking through him."

Already the oldest man to win a significant crown, Hopkins wants to defeat Shumenov toward eventually facing the winner of a clash between RING and WBC champion Adonis Stevenson and the WBO's Sergey Kovalev.

After winning the IBF middleweight title from Segundo Mercad on April 29, 1995, Hopkins went on to defend it a record 20 times before losing to Jermain Taylor by a split decision on July 16, 2005.

Hopkins (54-6-2, 32 KOs) wants to achieve similar accolades at 175 pounds, and appears to be ready to win by any means necessary.

"Aggression is the sport that we live in," said Hopkins. "This sport is about aggression. This ain't no tennis. I get paid to be aggressive. I get paid to put bodily harm on another person, whether you're going to do it to wipe out a guy for the rest of his life, or whether I have to do it just for the sport. That remains to be seen. But I am in a sport where you have to be aggressive. If that means that…it looks like you're being the bully, then some people might classify that as being the case.

"I'm in the sport where you're the lamb…and if you're a lamb in this sport of boxing where aggression is what we get paid for, then if that's what got me where I am, then I've been the best ever in this game at it. One thing about that is that your opponent normally fights back, and when you fight back, and he wants to continue to show that I'm the best, then, now, you've got an all-out brawl…I'm more motivated than I have been in the last five years, or the last 10 years."

Shumenov said he's ready for whatever Hopkins has to offer, but that he won't do what Murat and Dawson did, and he won't retaliate in kind — even if his rival fights dirty.

"It will be punches in bunches, if that kind of thing happens. But, again, I'm not going to do any dirty stuff. The most important thing is to just get into the ring with him. All of those other things, I don't care about."

So what exactly will Shumenov do against Hopkins?

"I'm not going to reveal anything," said Shumenov. "But I watch all of his fights."

Hopkins was ringside at the Alamodome in San Antonio, Texas, in December when Shumenov ended an 18-month absence to score one knockdown each in the first, second and final round of a third-round stoppage over Tamas Kovacs for the fifth defense of his belt.

"You saw the Karo Murat fight? Well, I believe that this guy is better," said Hopkins. "Even with half of the fights that he has on his record compared to Karo Murat, he's the better skilled, more energized fighter. He's more dangerous."

No matter what happens in the ring, when all is said and done, Shumenov said it will be him, and not Hopkins, whose hands will be raised in victory on April 19.

"I'm going to show the world that I'm the best light heavyweight champion in the world, and a lot of people just underestimate me. They think that because I have just a few amount of fights, that's how they judge me. But soon, they will find out, that with all of my abilities, I belong on the elite level, and that I'm the best light heavyweight champion of the world."