In the April issue: Battling back from defeat 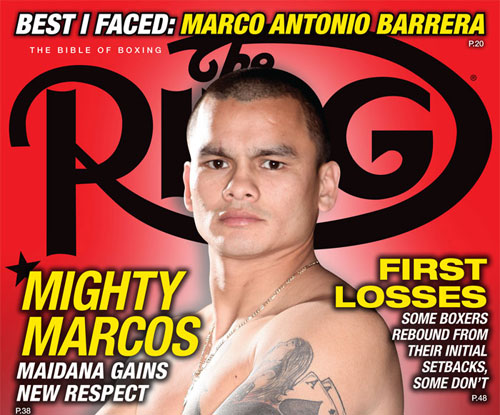 “I never thought of losing, but now that it’s happened, the only thing is to do it right.” — Muhammad Ali, after his first loss.

But how? How does anyone do it right?

Ali did it – did it right – in the years after suffering a 1971 defeat he never contemplated, anticipated or imagined against Joe Frazier. That landmark loss is fundamental to the Ali story. Without it, Ali might not be the global icon he is today. With it, there was adversity. He was no longer unbeaten. No longer untested, either. There were two rematches with Frazier. There was Manila, George Foreman and Zaire in a drama that began with a loss and ended in a legend.

Ali is a defining example of how that first defeat can be transformed into opportunity. On any career path, it’s a crossroads that fighters are told to expect. Adrien Broner, Canelo Alvarez and Abner Mares are there now. The unforeseen has happened, leaving each with a comeback to plot and potential self-doubt staring back at them when they look in the mirror.

That first loss is a tumble into the dangerous unknown for every fighter forced to make the trip. How will they react? After the zero on the right side of the won-lost column has vanished like a doughnut hole, it’s hard to know what or who will replace it. The 0 can be a fighter’s identity. It’s a mark of confidence or a symbol of invincibility. Some believe it’s as important to Floyd Mayweather Jr. as a dollar sign. Maybe, maybe not. Maybe it’ll always be there for Mayweather, just as it was for Rocky Marciano.

To read the rest of this story and others in the April 2014 issue of THE RING Magazine, please purchase the issue or subscribe to the magazine — both the print and digital versions — by clicking here. The current issue of the magazine also is available on newsstands.