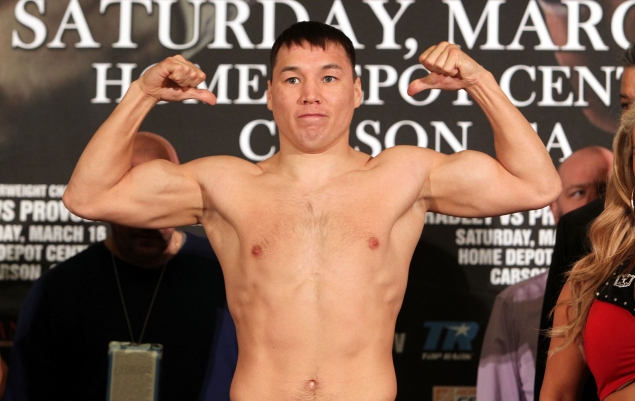 Plans are in the works for Ruslan Provodnikov to defend his WBO junior welterweight belt against lightweight titleholder Antonio DeMarco on June 14, according to the fighters' promoters.

"Arum and I are working together on making Provodnikov and DeMarco, and the date that we're looking at is June 14. We're trying to figure out what venue to go to, and we want to fight DeMarco," said Pelullo, of Banner Promotions.

"So that's what we're working on right now. I think that DeMarco is going to make a fight of it, and he's going to come right at Ruslan. The kind of style that he has is going to make Ruslan look like a star."

A 30-year-old nicknamed, "The Siberian Rocky," Provodnikov (23-2, 16 KOs) was last in the ring for a 10th-round stoppage that dethroned Mike Alvarado, whom he floored twice in the final round in October.

The win over Alvarado helped Provodnikov to bounce back from a unanimous decision loss last March to WBO welterweight beltholder  Tim Bradley, whom he floored in the 12th round of a bout that was voted The "Muhammad Ali–Joe Frazier" Fight of The Year by the Boxing Writers' Association of America.

Bradley has an April 12 rematch with Manny Pacquiao, whom he defeated by split-decision in June 2012.

"We're trying to make that fight," said Arum. "We're not looking past DeMarco, but we're hoping to get the winner of Bradley and Pacquiao."

A 28-year-old Mexican southpaw, DeMarco (30-3-1, 23 knockouts)will be after his third straight stoppage victory, having scored a second-round knockout of countryman Jesus Gurrola in January, representing his second appearance at 140-pounds.

In his previous fight last August, DeMarco twice dropped Fidel Monterossa Munoz on the way to a fifth-round knockout in his 140-pound debut, bouncing back from an eighth-round stoppage loss to Adrien Broner that dethroned him as WBC lightweight beltholder in November of 2012.

DeMarco had earned the vacant 135-pound belt with an 11th-round knockout of former two-division beltholder Jorge Linares in October 2011 and scored two more stoppage wins in defense of it, includiing a 44-second knockout of John Molina in September 2012.

The victory over Molina was DeMarco's fifth straight win since falling by ninth-round knockout to late Venezuelan Edwin Valero in February 2010.

A potential roadblock to Provodnikov-DeMarco from being on HBO could be the network's insistance on Provodnikov's facing the winner of a March 29 bout between Puerto Rico's Thomas Dulorme (20-1, 14 KOs) and Karim Mayfield (18-0-1, 11 KOs).

"I think that it's a great fight really exciting fight. I've been talking to Fernando Beltran, and he likes the fight. Artie is right. There is a reluctance on the part of HBO to buy the fight. I may end up going to Russia next week, and I may do the fight in Russia. We understand that HBO is the buyer, so they have a right to say that they want to buy this fight and not that fight," said Arum.

"That's because they're paying the money. We then, have the right to say, 'No, we want to do the world title fight, and we'll find a way to do it outside of HBO.' That's the dynamic of that. We may be able to convince HBO to do our fight, but we'll see. So it's all in a state of flux. The point is that the promoters want to do the Provodnikov-DeMarco fight, and the fighters are ready, and we're going to try to get it done with or without HBO. We have to respect the buyer."

"HBO is trying to make us wait until March 29 and to take the winner of Dulorme and Mayfield. We don't want to wait," said Pelullo. "Because what happens if Dulorme or Mayfield gets hurt. DeMarco's a better fight because of his style. That's what it's all about. We want to sign for the DeMarco fight."

Although both Provodnikov and DeMarco are being trained by Freddie Roach, Pelullo said Roach would stick with Provodnikov, whom he has trained longer, if the bout were to happen.