Amir Khan eyes ‘Plan B’ for May, if not Floyd Mayweather Jr. 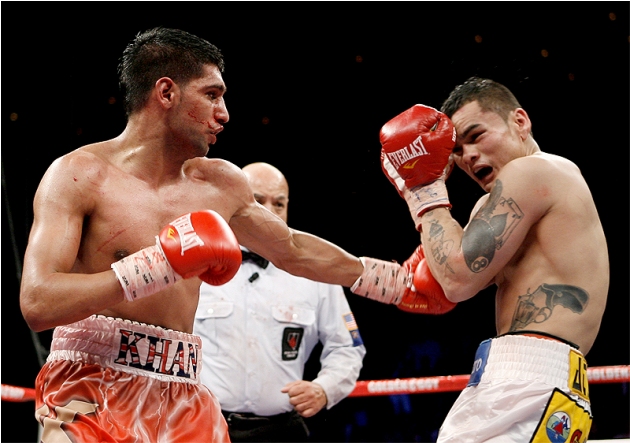 "At one time," said Amir Khan, "I thought I was 100 percent to get" the May 3 fight with Floyd Mayweather Jr.  Then Marcos Maidana's was added as a possible opponent for Mayweather.

Mayweather could be playing a mental game of bait and switch, but he has kept Khan guessing by weighing the merits of facing him against those of fighting Maidana, whom Khan out pointed in 2010 in a close fight.

During an interview with Fighthype.com, Khan credited Mayweather's marketing strategy, even as the former 140-pound beltholder considers a different opponent for May.

"I mean, look, if you think about it, even though he's not announced the fight, he's still promoting the fight in two different parts of the world, with Maidana being on one side and me being on the other side of the world," said Khan, who said in December that he already has signed his contract to face Mayweather at the MGM Grand in Las Vegas.

"He's getting coverage from different countries and different parts of the world all the time. The UK press is putting in the newspaper whatever little thing Floyd is saying about me, and whatever Floyd says about Maidana, that's in the press in Argentina."

Mayweather stated on his Twitter account on Feb. 3 that he would allow his fans to decide whether his next opponent will be Khan or Maidana. Khan won the voting 20,105-to-15,474, according to the Mayweather Promotions website.

"He's doing it the smart way," said Khan, "where he's getting a lot of publicity from it even though he's not announced the fight."

In the event that he is not chosen to fight Mayweather, Khan said that he has an alternative "Plan B."

"I'll still fight in May regardless of whatever happens," he said. "Early May or end of April, I want to fight because I want to keep myself busy, you know. I've been at it for a long time, so I definitely have a date around that time, yeah. We're going to get a Plan B opponent, hopefully take that fight, and still work our way towards a Mayweather fight. Look, the aim and the goal is to fight Floyd Mayweather and to keep working towards that fight. That's what we're hoping for.

"So if we can get that fight, you know, that's like the pinnacle of everything, really. I want to reach the best fight for me and I think the Floyd fight is the best fight for me. I'll be still working towards that one big fight. If we don't get the fight, then we just have to go to Plan B, really, and we have to just kind of stay strong mentally. I mean, everything happens for a reason and maybe it's not the right time, so you just move on and then you just get a new opponent. Look, it's not going to faze me. I'm just going to have to carry on and do my thing, really."

In his last fight in December, Maidana earned the WBA's welterweight belt by unanimous decision over Adrien Broner, against whom he is considering a rematch.

Although he has yet to compete as a full-fledged 147-pounder, Khan would be looking for his third straight victory in as many fights under Virgil Hunter, who replaced Freddie Roach after Khan was knocked out by Danny Garcia in July 2012.

Prior to facing Garcia, Khan had lost a disputed split-decision to current IBF 140-pound beltholder Lamont Peterson in December of 2011.

Khan has been victorious, however, in his past two bouts, by 10th-round knockout over Carlos Molina (a California-based lightweight prospect who is not to be confused with the IBF junior middleweight titleholder of the same name) in December 2012 and by unanimous decision over former titleholder Julio Diaz in July of 2013.