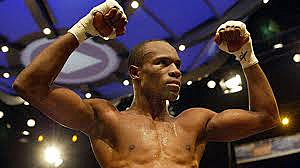 A boxing commission has finally stepped up to the plate and denied former junior welterweight titleholder Vivian Harris a fight.

Harris (31-9-2, 19 knockouts) was due to fight unbeaten British welterweight Bradley Skeete this weekend on the undercard of a doubleheader featuring heavyweight rivals Tyson Fury and Dereck Chisora in separate bouts. Harris was scratched from the card when he failed a pre-fight medical. Skeete (14-0, 4 KOs) will now face Christopher Sebire of France.

Thought Sebire (22-7, 8 KOs) doesn’t carry the name value of Harris, he presents a more acceptable challenge to Skeete, and one that is less likely to result in tragedy.

Harris has been fighting years past when he should have retired from the sport. In April 2011, Harris looked worse for the wear as he climbed into the ring to face rising young prospect Jessie Vargas. That fight ended after one round when Harris retired in the corner after taking a shellacking.

Harris was a knockout victim in his two fights previous to the Vargas one, and prior to that Harris left the ring on a stretcher after a headbutt against Noe Bolanos left him in bad condition.

Harris announced his retirement on social media following the Vargas loss, but as with too many fighters well beyond their best, it was short-lived.

Since, Harris has been stopped two more times and has shown an almost complete lack of punch resistance. Harris’ most recent fight may have fooled some fans into thinking he has something left, as he was awarded a controversial decision over Danny O’Connor. Most knowledgeable observers in attendance pegged O’Connor the clear victor, but Harris got the nod.

Harris is just one of many fighters who seem to be the only one who doesn’t see the signs that it’s time to jump out of the ring for good. The British boxing commission did a wonderful job in protecting the fighter from himself. One hopes that other commissions follow suit if Harris applies for a license in their jurisdiction.

Harris was once considered a solid threat to Floyd Mayweather when the pound-for-pound king entered the junior welterweight division in 2004. However, the WBA beltholder at the time saw his dreams of a potential Mayweather clash dashed when journeyman Carlos Maussa stopped him in a wild fight on the undercard of Mayweather-Arturo Gatti in 2005. In the time since, Harris’ record is 6-7-1 with one no contest.

Harris is no Hall of Famer, but the 35-year old Brooklynite should be satisfied with having won a major world title and retiring with his faculties intact.