The end of the ‘nice’ Manny Pacquiao? 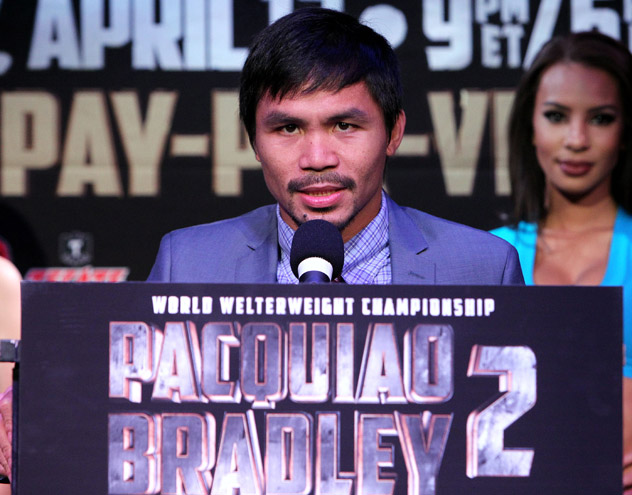 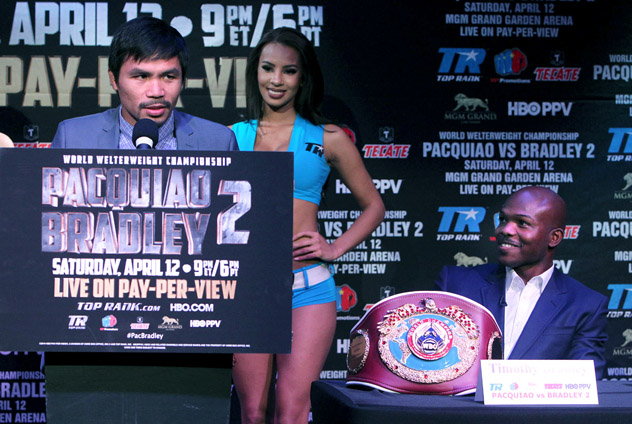 NEW YORK – No more Mr. Nice Guy. That is Manny Pacquiao’s vow leading up to his rematch against Timothy Bradley on April 12.

Pacquiao made the pledge during a press conference at New World Stages Theater in midtown Manhattan on Thursday afternoon. The response was prompted after Bradley questioned whether the Filipino superstar still had the hunger, aggressiveness and killer instinct that he once displayed in moving up the pound-for-pound best list. Bradley said Pacquiao stepped off the accelerator in his last match, against Brandon Rios.

“I’m just too nice to opponents in the ring sometimes,” Pacquiao said. “But this time around he told me that I don’t have the killer instinct anymore and I’m not aggressive. That’s a challenge to me to bring back that aggressiveness and killer instinct in our fight on April 12. That’s why I’m excited. So I can prove it to him.”

Bradley’s comments may have struck a nerve with Pacquiao, who hasn’t stopped an opponent in four years – Miguel Cotto in the 12th round in 2009.

“It just happened that all my opponents are bigger than me,” Pacquiao said regarding his KO drought.

Bradley is the same size as Pacquiao. So size will not be an issue in their HBO Pay Per View match at the MGM Grand in Las Vegas .

Besides the simmering emotions over the controversial decision in the first fight, Bradley, who walked away with the victory and the WBO welterweight title, has turned up the heat even more.

Freddie Roach, Pacquiao’s trainer, thanked Bradley for lighting a fire under Pacquiao. Roach was imploring Pacquiao to finish off a badly beaten Rios in their match in Macau last Nov. 24. Pacquiao wouldn’t do it.

Even though he is involved in a violent and brutal sport, Pacquiao is a very gentle man. He is not given to angry outbursts.

“I’ve seen him angry a couple times in life, but too often. Never against an opponent,” Roach said.

Roach said there has been a gradual decline in Pacquiao’s aggressiveness in the ring the last four years. He believes the Filipino star’s Christian beliefs may play a role.

“I know Manny is very into the Bible,” Roach said. “I will show him those verses and hopefully that will help. You have to do what you have to do. I don’t know the Bible well. I’ve had people research it. There are a lot of wars and a lot of violence there. There’s a lot of killer instinct in the Bible.”

“It’s been four years now since we had a knockout. I told Manny that’s why your paydays are getting lower and that’s why the pay-per-view audience isn’t as good,” Roach said. “You tell me that you want to give the people what they want to see and the people want to see knockouts.”

You wonder whether the Marquez knockout has made Pacquiao gunshy. Roach said no.

“He’s a realist. He knows getting knocked out is part of the sport,” Roach said. “It really hasn’t affected him. When I first met Manny and we were getting ready for a championship fight he wanted to show me some fights where he got knocked out. I said, ‘Why do you want to show me that?’ He said, ‘I want to show you my life and everything that happened.’

“He’s not embarrassed like that. He got knocked out twice. Once with a head shot and once with a body shot. It’s part of the sport. He understands that better than most.”

Does Pacquiao still have the capability of knocking out opponents?

“I’ve seen him in the last camp stop a few guys in sparring,” Roach said. “He picked it up a little bit. Can you force him? No. It’s his decision. I think Bradley saying he lacks it is doing us a favor. Manny likes to prove people wrong also.”

Pacquiao agrees. He said it has nothing to do with ability or anger.

“I don’t need to be angry,” Pacquiao said. “I just need to focus on aggressiveness and killer instinct that I had before and that’s what they told me is gone.”

He added: “I believe that boxing is not about killing each other,” Pacquiao said. “Sometimes I’m just too nice when I know that I’m leading and I’m ahead on points. I take it light and I take it easy.”

He promises that won’t happen against Bradley.

Promoter Bob Arum said the deal for a match between Sergio Martinez and Miguel Cotto is all but finished in his view.

“That’s going to happen. We got a lot of players who are kibitzing and are emotional like Lou [DiBella] and Sampson [Lekowicz],” Arum said regarding Martinez’s promoters. “The issues are so much nonsense now that they don’t exist as far as I’m concerned. As far as I’m concerned the fight is done, but they still have these little issues.”

Arum said that Todd duBoef, President of Top Rank, is also nailing down a proposed match between WBO junior lightweight champion Mikey Garcia and Yuriorkis Gamboa. If it is finalized, Arum said the fight will take place at the Los Angeles Forum, which is owned by Madison Square Garden and recently underwent a $40 million facelift.