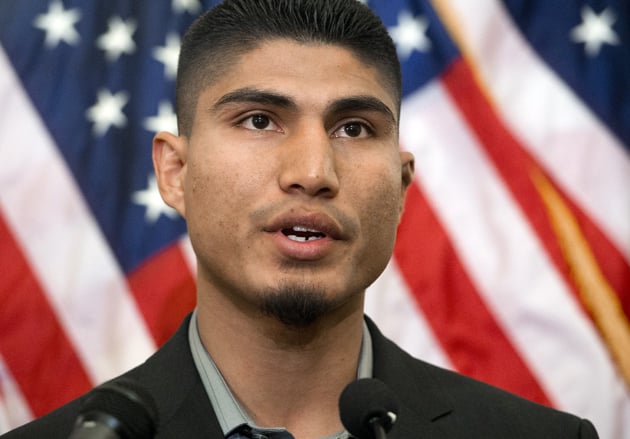 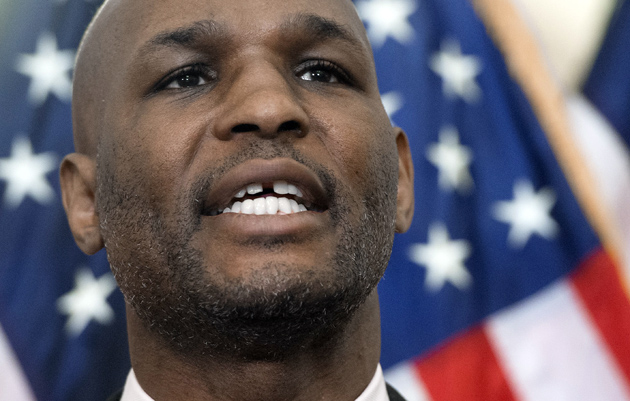 IBF light heavyweight titleholder Bernard Hopkins was among the fighters that spoke during Tuesday’s press conference that saw professional boxing and fighting organizations pledge $600,000 in support of the Professional Fighters Brain Health Study at the U.S. Capitol in Washington, DC.

WASHINGTON – Former amateur boxer and current Senator Harry Reid (D-NV) revealed that when he first witnessed Mixed Martial Arts (MMA), he thought of it as a “fair street fight”. That’s an extremely different reaction than his colleague Senator John McCain (R-AZ), another former amateur boxer had two decades ago, when he likened the UFC to “human cockfighting”.

The press conference promoted the study’s work with the types of brain injuries that affect fighters, football players, and even soldiers fresh from combat. That unity was mentioned by multiple speakers, as if to underscore how unlikely such cooperation, bipartisan or otherwise, normally would be. Dr. Jeffrey Cummings, Director of the Cleveland Clinic Lou Ruvo Center for Brain Health called it remarkable that, “four fiercely competitive organizations have come together to support this study.”

The $2 million Professional Fighters Brain Health Study, which attempts to detect early signs of brain trauma in order to predict reactions to head injuries, should inspire such accord between the worlds of boxing and MMA, because both sports are increasingly being challenged for the substantial risks their athletes take whenever they step in the ring or the octagon. There is considerable awareness of the dangers posed by combat; boxing legend Mickey Ward has decided to donate his brain to science once he dies, to further such research. Lorenzo Fertitta, CEO of Ultimate Fighting Championship said that the UFC was purchased under the premise that it would create a global sport that was safe. “We ran towards regulations. Our company has a history of trying to enhance safety for athletes.”

MMA light heavyweight champ Jon Jones agreed that safety was a priority. “It’s always a concern. I think the biggest thing is that fighters need to be aware of not taking too much punishment in the gym. Try to take the least hits as possible in your training. When I spar I go 80 percent. Me and my teammates never try to hurt each other or look for a knockout.”

Kevin Kay said that since Spike TV’s launch in 2003, they have showcased many of the world’s most gifted athletes. “We understand we need to do whatever we can to secure their health and well being. Entertainment can’t be at the expense of athletes.”

IBF light heavyweight champion Bernard Hopkins said, “This is a real passion for me because I’ve done this since I was an amateur at 8 or 9 years old. Fighters who fought before me…a lot of them are not in good shape.” He paused. “It’s amazing that I stayed around this long, active and able to still give my opinion on something I feel so strongly about.”

There are currently over 400 fighters participating in the study, which includes more MMA fighters than boxers. Among the 400, 25 are retired, the rest are active. The Cleveland Clinic eventually hopes to enroll up to 650 subjects. Senator McCain said that there are also numerous Department of Defense studies going on because of the concussions and head injuries caused by I.E.D.s or improvised explosive devices used in Iraq and Afghanistan.

“Our goal would be to try and join studies with others about brain injuries,” he said. “We are devoting significant amounts of federal money to this…and there’s no better organization than the Cleveland Clinic.”

Senator McCain had the opportunity to be lighthearted at the end of the press conference, when he was asked who would have won “back in the day,” had he fought Senator Harry Reid. “I’ve found that Senator Reid is a very resourceful fighter, so I’m not sure of the outcome, but it would have been a lot of fun.”

Each fighter and promoter expressed much gratitude to both Senators, and hoped that the event could inspire some much-needed change in Washington. As Kevin Kay of Bellator MMA said, “If organizations that are as fiercely competitive as ours can come together, then I think there is hope, even for Democrats and Republicans.”