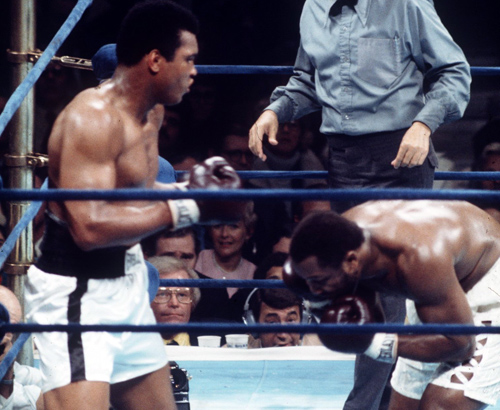 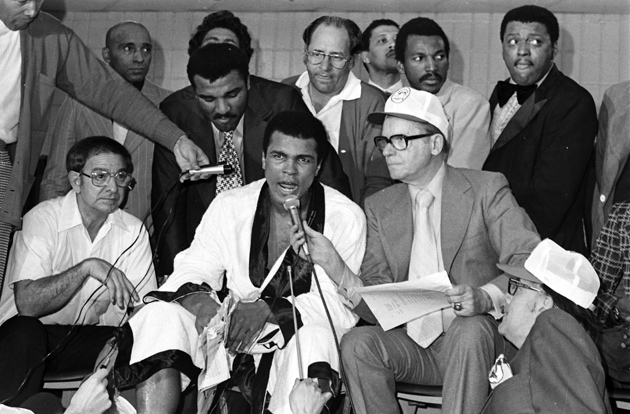 Muhammad Ali talks to the press in his dressing room after winning the rematch with his arch rival Joe Frazier on Jan. 28, 1974 at Madison Square Garden in New York, N.Y. Ali’s physician, Dr. Ferdie Pacheco (center top), who recalled “Super Fight II” for RingTV.com, looks on.

On March 8, 1971, Joe Frazier bested Muhammad Ali in their first meeting, known as “The Fight of the Century” and for many that tagline was literal until Oct. 1, 1975, when the pair squared off for a third time, in the Philippines.

“The Thrilla in Manila” was indeed an understatement.

It is doubtful that any boxing fan has viewed the second part of this historic trilogy more than those epic battles but “Super Fight II”, which took place on Jan. 28, 1974, at Madison Square Garden in New York, produced quality action and is unquestionably worth a retrospective look.

Dr. Ferdie Pacheco (“The Fight Doctor”) is the only surviving member from either corner team and, despite acknowledging that Ali vs. Frazier II is the weaker war, his overall impression is that the non-title bout still managed to bring out the best in two glorious gladiators.

“Heavyweight boxing was in a lull period at that time,” said Pacheco, who was Ali’s personal physician for 15 years. “There were no compelling fights for Ali at that point and Frazier had suffered an astounding defeat at the hands of George Foreman, who bounced him off the canvas like a basketball.

“What Ali needed was an easy fight and suddenly Joe Frazier looked like an easy fight. The money was big but a lot of fans felt they were being overcharged for a questionable non-title bout.”

The public, and Ali, had underestimated the Philadelphia warhorse. “Smokin” Joe had looked listless against British contender Joe Bugner, in July 1973, but there was every reason to believe that his guns would be fully reloaded for the opportunity to defeat “The Greatest” for a second time.

“A feeble attempt to pump up this rematch just fell flat,” said Pacheco. “Suddenly you couldn’t sell Joe Frazier as a viable opponent and inside the Ali camp we fell into the same stupor. Try not to hurt Joe was the phrase on everyone's lips, poor old broken down Joe.

“Essentially Ali was getting ready to beat the s__t out of a damaged Joe Frazier.”

Days prior to the contest both fighters appeared on ABC television to review their first fight, along with the irreplaceable Howard Cosell. All seemed to be going well until Ali labeled Frazier “ignorant,” a remark which was the reddest of rags to the angriest of bulls.

An unrehearsed brawl ensued and, although neither man was hurt, the New York State Athletic Commission fined Ali and Frazier for bringing the sport into disrepute.

Despite Frazier’s motivation to destroy Ali he had been through a terrible 12 months. The second round loss to Foreman was physically and mentally devastating and his original trainer/ manager, Yancey “Yank” Durham had passed away, following a stroke, only a month after the Bugner fight.

Eddie Futch, who had assisted Durham, was promoted to chief second and come fight night the future Hall of Fame trainer had managed to whip his charge into terrific shape.

“On fight night I looked over at Joe and saw the same old guerrilla face,” said Pacheco. “There was steam rising from his body and he was ready. I pointed that out to Ali who grunted, but at that point the fight didn't feel right. Hey, this is still Joe Frazier and he’s bad.”

“Ali out-boxed Joe early, which was exactly what he wanted,” said Pacheco. “His punches were building up in strength and Joe’s face was getting puffy, although that didn’t stop him from throwing thunderous hooks to the body.

“Suddenly Ali uncorked a sizzling combination, enough to knockout any heavyweight. Joe blinked, his knees buckled and he was seconds from going down, when the referee (Tony Perez) intervened. He kept Joe from falling and led him back to his corner.” 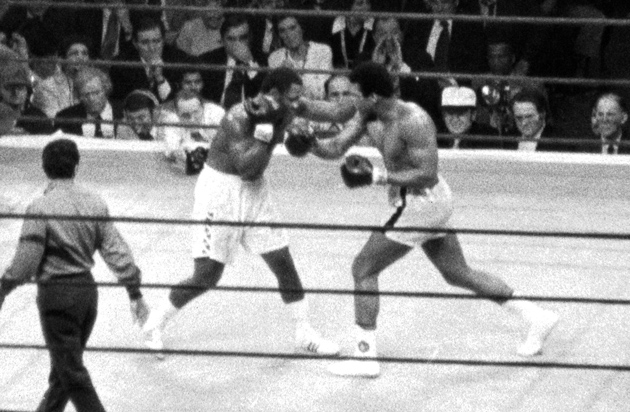 Perez mistakenly thought he heard the bell ending the second round and Ali was deprived of following up on a clear advantage.

Still, as with all of their fights Frazier found his form in the middle rounds. The pressure was getting to Ali, who struggled to find an escape route, as Philly’s finest went to work on his internal organs.

In Round 8 a huge right hand, unheard of in the Joe “Left Hook” Frazier handbook, caught Ali flush and sent the ex-champion back to his corner with blood dripping from his nose.

“Joe was one tough son of a bitch,” said Pacheco, who is 86 years of age. “He was hurting Ali and the non-fight had turned serious. Suddenly, it was a repetition of fight one. Joe had the bulldog like tenacity and kept pounding Ali's body, who returned fire and blistered Frazier’s head.

“It was a bloody mess. Joe’s whole upper body was a mass of welts but he never took a step back. Forward he came into the machine gun rapidity of Ali's combinations. Joe would have fought until he dropped dead.

At the end of 12 action-packed rounds it was Ali who had emerged victorious by unanimous decision. The majority of those present had Ali ahead, although more than one writer favored Frazier.

Ali, much to the chagrin of Eddie Futch, had clinched repeatedly and the referee failed to deduct points. Regardless, Frazier had absorbed a terrible amount of punishment.

“Joe lasted until the last bell,” said Pacheco. “How I don’t know, but this phony little fight blew up into a roaring continuation of Ali-Frazier 1. When the crowd understood what they had seen they yelled for more.

“And so the ‘Thrilla in Manila’ was born.”