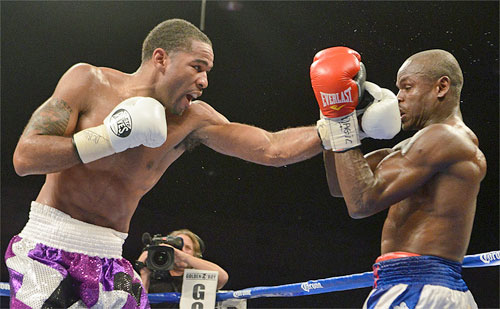 Lamont Peterson: That’s how a good fighter rebounds from a devastating setback. Peterson swore up and down that he quickly put behind him his third-round knockout loss to Lucas Matthysse last May. No residual effects were apparent on Saturday, when a strong, confident Peterson outpointed previously unbeaten Dierry Jean (25-1, 17 knockouts) to retain his IBF junior welterweight title Saturday in his hometown of Washington, D.C. Peterson (32-2-1, 16 KOs) fought aggressively but smartly, gradually wearing down a capable and determined opponent as the fight progressed. The scores were 118-111, 116-112 and 115-113, the last tally being from Jean’s fellow (and loyal) Canadian Pasquale Procopio. Peterson dominated the punch statistics but one figure stood out: 161 of 289 power punches, 56 percent. That’s impressive. So just like that, Peterson is back in the win column and again a significant factor in the 140-pound division. RING champ Danny Garcia is due to fight TBA in March. If he wins, Garcia vs. Peterson makes perfect sense. Especially after what we saw on Saturday night.

Mikey Garcia over Juan Carlos Burgos: The fact that Garcia failed to put Burgos away shouldn’t obscure another excellent performance by the young Mexican-American on Saturday night in New York City. Garcia did his part, stalking his taller opponent for much of a one-sided fight. Burgos (30-2-2, 20 KOs) simply went into safety-first mode after Garcia stung him with a right hand in the third round. And, as the HBO commentators pointed out, it’s extremely difficult to stop a good, veteran fighter like Burgos when he’s determined to survive. So Garcia must be satisfied with a lopsided decision (118-110, 118-110 and 119-109) and continue on the path toward untold fame and fortune. Garcia (34-0, 28 KOs) is now a legitimate foe for anyone. That includes Manny Pacquiao, who has been mentioned as a possible opponent. That would be an extremely dangerous fight for the smaller, less experienced Garcia even as Pacquiao gets older. I wouldn’t put anything past Garcia, though; I believe he’s that good. And I have a feeling Burgos feels the same way right about now.

Marco Huck: One sign of a good fighter is the ability to fare better against an opponent the second time he fights him. Huck recently drew with slick Ola Afolabi but outpointed him in a rematch. It was Firat Arslan’s turn on Saturday in Stuttgart, Germany. Huck narrowly outpointed Arslan in a rousing fight in November 2012, the kind of fight that demanded a rematch. The second fight was competitive through five-plus rounds, at which point it deviated from all previous rounds. Huck (37-2-1, 26 KOs) put Arslan (33-7-2, 21 KOs) down twice in the sixth round and, looking all of 43, he couldn’t continue. Huck, who retained his WBO title, can cross another nemesis off his list. What’s next for Huck? He said last week that he still wants to win a heavyweight title, possibly the one Vitali Klitschko vacated if he can be maneuvered into position. That seems realistic given his strong performance in a losing cause against Alexander Povetkin in February 2012. Only one thing seems certain: Any cruiserweight on the planet would be hard pressed to beat the 29-year-old Berliner.

David Price (16-2, 14 KOs) got to taste victory again on the Huck-Arslan card. The giant Briton put away a Hungarian named Istvan Ruzsinszky (12-10-1, 8 KOs) with one of his vaunted right hands two minutes into a scheduled eight-rounder. To be sure, it was a baby step in his effort to rebuild his career after consecutive knockout losses to Tony Thompson. He had to start somewhere, though. … Jean shouldn’t be too discouraged. The native of Haiti demonstrated both all-around ability and resilience in his first truly major fight. With more experience, the fight probably would’ve been much closer. Jean’s problem might be his age: 31. He needs to learn from the Peterson fight, stay busy, keep winning and push as hard as he can to get another opportunity. … Jermell Charlo easily passed what was supposed to be a stiff test when he outclassed rugged Gabriel Rosado on the Peterson-Jean card. Rosado (21-8, 13 KOs) stalked Charlo (23-0, 11 KOs) for most of the fight but Charlo, calm and cool throughout, avoided the majority of Rosado’s punches and consistently countered with hard, accurate shots of his own to win a one-sided decision. Charlo will win a world title soon. …

Bryant Jennings (18-0, 10 KOs) gave an impressive performance against fellow heavyweight prospect Artur Szpilka (16-1, 12 KOs) on the Garcia-Burgos card. Jennings seemed to be on his way to a one-sided victory when, WHAM, a left hook nearly decapitated the Pole and the fight was stopped at 2:20 of the 10th a final round. The Philadelphian demonstrated not only ever-improving boxing skills but also a desire to finish off Szpilka, the kind of killer instinct that appeals to fans. … Puerto Rican prospect Felix Verdejo’s one-punch knockout of Lauro Alcantar on the Garcia-Burgos card was about as vicious as they come. A left from Verdejo (10-0, 7 KOs) instantly put Alcantar (8-1, 1 KO) to sleep only 21 seconds into the lightweight fight. Verdejo, who lost to Vasyl Lomachenko in the 2012 Olympics, has the makings of Puerto Rico’s next star. … Curtis Stevens needed a dose of Patrick Majewski. Stevens, coming off his knockout loss to Gennady Golovkin, hurt and put Majewski (21-3, 13 KOs) down with a left jab early in the first round and the U.S.-based Pole never recovered Friday in Atlantic City, N.J. He went down twice more, which ended the fight after only 46 seconds. Good comeback for Stevens (26-4, 19 KOs), bad impression left by Majewski. … Thomas Williams Jr. and Cornelius White also treated us to a crazy first round Friday in Shelton, Wash. Williams (16-0, 11 KOs) hit the canvas but scored two knockdowns himself, the second of which rendered White (21-3, 16 KOs) unable to continue only 2:49 into the fight. White was coming off a third-round knockout loss to Sergey Kovalev in June.