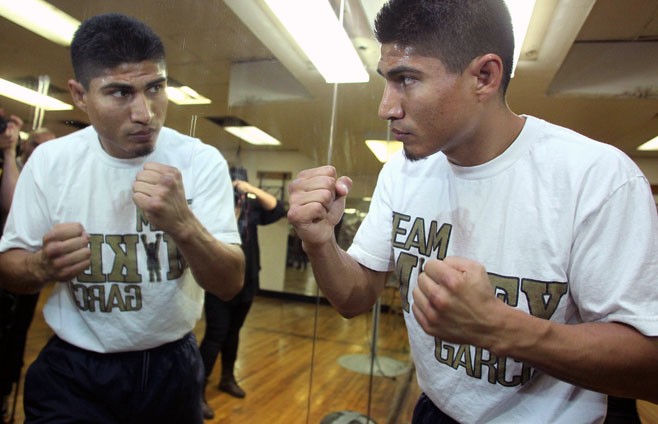 After blazing through three matches and picking up world titles in two weight classes last year, Mikey Garcia is on the fast track to stardom. His promoters at Top Rank are laying out a plan that could lead to a major showdown with Manny Pacquiao by next year.

Promoter Bob Arum called Garcia “boxing’s next superstar” at BB King’s in Manhattan on Thursday afternoon during the final press conference for Garcia’s defense of his WBO junior lightweight title against Juan Carlos Burgos at the Theater at Madison Square Garden on Saturday.

It’s heady stuff for the 26-year-old from Oxnard, California, who still hasn’t had time to absorb everything that happened in 2013.

“I didn’t get to enjoy it. I was in training camp right away after my last fight and throughout the holidays,” Garcia said. “It’s all part of the work. I have to keep working and training. I have to do what I have to do to keep winning fights. I can’t just let last year be the only good year that I have in the sport and that’s it. I want to make 2014 better than last year.”

Is it possible that Garcia (33-0, 28 knockouts) can top what he did last year? His brother and trainer, Robert, believes he can.

“Mikey had a great year. This year could be harder, but it could be better,’’ Robert Garcia said.  “We fight on Saturday and then we could fight three more times this year. Mikey’s broken nose kept him out for five months last year and we could have fought four times if not for that. This could be a better year. We could easily fight at 130, go to 135 and be at 140 by the end of the year. We could do that. It’s nothing Mikey can’t reach.’’

It would be a trail that has been blazed by Oscar De La Hoya, Floyd Mayweather and Manny Pacquiao, who all started out in lower weight classes and exploded into superstars at 140 pounds and above.

Robert Garcia is anxious to see how his brother reacts to Burgos (30-1-2, 20 KOs), a sturdy challenger who has failed in his two previous attempts at winning a world championship.

“I think Burgos is a very dangerous fighter especially with the fact that he’s had two world title fights and come up short and fighting someone like Mikey who has been mentioned as Pound-for-Pound one of the best fighters,” Robert Garcia said. “He’s going to be better than ever. We saw his fight against (Rocky) Martinez and I believe we’re going to see a better Burgos than the one against Martinez.’’

Burgos had a draw against Martinez for the WBO junior lightweight title on the undercard of the show that Garcia won the WBO featherweight title against Orlando Salido at the Theater last Jan. 19. It was a bitter setback, because Burgos and many in attendance thought he won the fight.

When Garcia fought Martinez for the title he was fighting at 130 pounds for the first time. He was dropped by Martinez, but got up and stopped him in the eighth round to win the title.

“It wasn’t the first time I went down,” Garcia said. “I went down in my 15th fight. A good punch can drop anyone. I didn’t feel that heavy of a hand. It was just the right placement of the punch. I wasn’t hurt and I got up and continued to fight and continue with my game plan.”

It was the kind of maturity as a boxer that Robert Garcia was looking for in his brother. But he would rather have Mikey not taste the canvas at all in order to carry out the game plan.

Garcia said he is going to be prudent when it comes to how quickly he is moved along.

“I always let things happen when the moment’s right. I don’t want to rush things,” Garcia said. “If those are the plans to fight big names down the road that means they have big plans for me and they expect good things from me. I hope to please everybody. It’s going take time. I’m not going to jump into things just to rush things as it’s offered. I have to make sure when I do take on those bigger fights that I’m ready.”

Robert Garcia, who has seen Pacquiao up close while working the corners of Antonio Margarito and Brandon Rios, hears all the talk about his brother fighting the Filipino superstar in the future. He would rather keep that talk at bay for now.

“There’s been talk. Mikey is fighting at 130. We’re not looking at that right now. It’s a possibility,” Robert Garcia said. “But we have Burgos in front of us right now and we have to concentrate on that. We can’t start preparing for someone like Pacquiao when it could be a year from now. We could do three or four fights and that would not include Pacquiao. We have to be focused on our career and if that time comes we’ll take it. Right now Burgos is in our mind.”