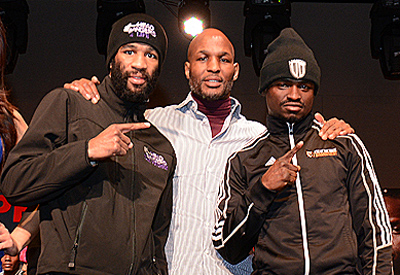 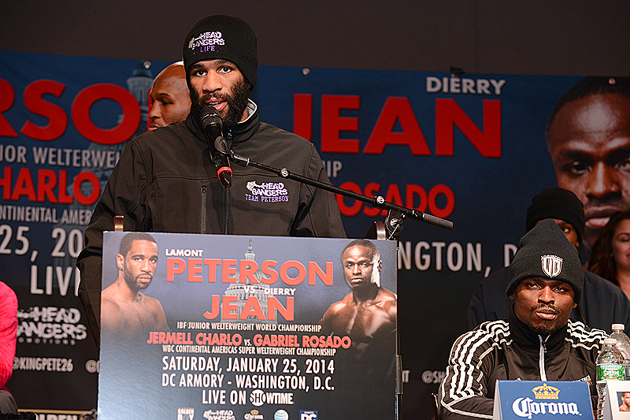 WASHINGTON – Boxing has returned to the nation’s capital, so much so that Thursday’s downtown press conference for the Lamont Peterson-Dierry Jean 140-pound title bout at The Hamilton felt like a familiar routine.

Saturday’s Showtime-televised main event between local IBF beltholder Peterson and Montreal’s Jean at the D.C. Armory will be supported by a junior middleweight crossroads match between unbeaten Jermell Charlo, of Houston, and former middleweight title challenger Gabriel Rosado, of Philadelphia.

The Golden Boy Promotions event will mark the third time Peterson has engaged in IBF junior welterweight title bouts in his hometown, having won both previous fights against Amir Khan and Kendall Holt. Peterson has been the key figure in Washington, D.C.’s boxing renaissance, but he is coming off a brutal stoppage loss to Lucas Matthysse last May.

Peterson was philosophical about getting knocked out by one of the sport’s hardest hitters.

“I’ve fought a lot of guys, I’ve knocked a lot of guys out, they come back; everything is okay. So I’m not worried about if I can take a punch… if I was worried about it I wouldn’t be getting in the ring. I’m totally fine and I’ll show that Saturday night,” he added.

While title fights are old hat for Peterson, this will be Jean’s first shot at the big-time. The Haitian-Canadian was respectful of his opponent, but also questioned whether Peterson has fully recovered from the Matthysse fight.

“He has good style, good stamina, and he's a great champion, but what he does not have is a good chin because he went down a lot in his career… me, I know I'm a great puncher, so it's going to be a good fight,” Jean said.

“I think the Matthysse fight slowed him down because it was a really bad knockout the way it got stopped. Usually when professional boxers go through a knockout like that it's so hard to come back mentally,” Jean added.

When summoned to the podium, Peterson kept his remarks brief, in a bid to conserve his energy for the fight. Jean was less reserved in an interview afterwards, and predicted he would win by knockout because he said Peterson still isn’t over the beating he took at the hands of Matthysse. Both men are targeting RING/WBC/WBA 140-pound champ Danny Garcia should they win.

Hopkins: Charlo is “the next champion” 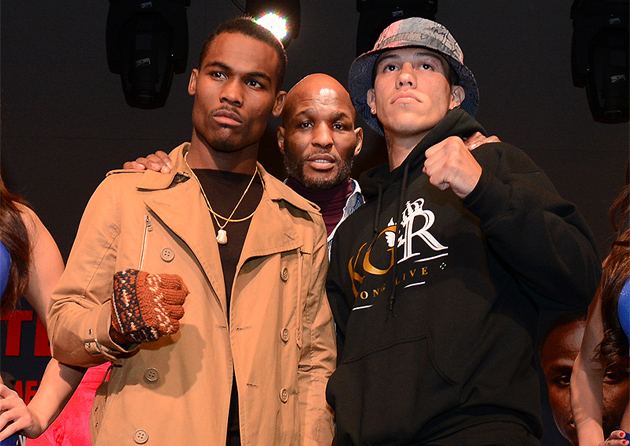 Emcee and Golden Boy executive Bernard Hopkins was effusive in his praise for Charlo, who with his twin brother Jermall is considered one of the top prospects in boxing.

“This is the next champion to come in boxing,” Hopkins said. “I really believe that he has what it takes to become one of the stars.”

Charlo characterized himself as a “different breed” of fighter, and seemed confident in his strategy for the fight with the larger and more experienced Rosado.

“I have to stay consistent with my punches. I have to fight at angles. I have to continue to push myself through each and every round… I know that without those things then it’ll be a tough fight, a tough night,” Charlo said.

Aside from strategy, Charlo – who has been boxing since he was just eight years old – had some harsh words for Rosado, who has a history of sustaining cuts.

“I’m not playing games… Saturday night, expect something crazy. If his face holds up then we’ll go 12 rounds, if not, I’m knocking him out early. Be ready,” Charlo warned.

Meanwhile, Rosado was confident that moving down from middleweight would help him earn a badly needed victory, after dropping two of his past three fights. The third fight, a split-decision loss to J’Leon Love, was declared a No Contest after Love tested positive for a banned diuretic.

“I’m excited because this is a new year and I’m going back down to super welterweight, where I have unfinished business,” Rosado said.

Rosado, who last fought at 154 pounds in 2012, said there’s no secret to his game plan for Saturday night.

“I’m going to go out and I’m going to apply smart pressure. I mean I’m not trying to let this go in the hands of the judges. I’m going for the knockout,” Rosado said.

Rosado calls himself “a young veteran,” and thinks his level of experience will give him the edge over Charlo, even as he professed respect for his opponent.

“It’s a really tough fight. I commend him for that. I think he does believe in himself, but at the end of the day, I believe in myself too,” Rosado said. “I’m only 28, so I’m young and I’m reaching my prime. The fans haven’t seen the best of me yet.”

As Bernard Hopkins said as he sailed out of the elegant venue, “I think both the main event and co-main events are going to be barn burners. The people in D.C.’s boxing community are going to talk about them long after the fight.”