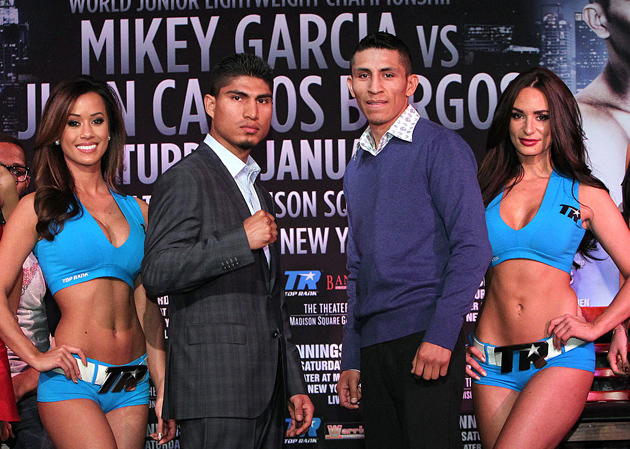 Having stopped 10 of his past 11 opponents, Mikey Garcia enters Saturday's first defense of his WBO junior lightweight title belt against Juan Carlos Burgos riding similar momentum that three-division titlewinner Abner Mares had before a first-round knockout loss to Jhonny Gonzalez  in August.

Garcia (33-0, 28 knockouts) came in as the RING 126-pound champion when he faced Puerto Rico's Roman “Rocky” Martinez, against whom he rose from a second-round knockdown to defeat by eighth-round stoppage on Nov. 9, winning the WBO's 130-pound belt in the process.

Garcia already had earned THE RING and WBO featherweight championships during an eight-round technical decision in January of 2013 over Orlando Salido, whom he dropped four times. The 26-year-old counterpuncher followed up that victory with a fourth-round knockout of ex-beltholder Juan Manuel Lopez  last June.

In Burgos (30-1-2, 20 KOs), Garcia will face a man who battled Martinez to a split-draw on the Garcia-Salido card, and he will do so while being touted as "a top 10 pound-for-pound fighter right now" by Top Rank CEO Bob Arum.

Mares (26-1-1, 14 KOs) was in nearly identical position as THE RING's No. 5-rated pound-for-pound fighter entering the bout with Gonzalez (55-8, 47 KOs), but the reigning WBC featherweight titleholder was floored twice by the Mexican veteran during the first defense of the belt he won in his 126-pound debut, a ninth-round knockout of Daniel Ponce de Leon in May of 2013.

Ponce de Leon was the last man to defeat Gonzalez in an eighth-round technical decision in September of 2012 that ended Gonzalez's 12-fight winning streak which included 11 knockouts.

Mares' was similarly looking forward to bigger and better things prior to being upset by Gonzalez, whom the RingTV.com insiders picked to lose by a resounding 17-0.

Below, RingTV.com, yet again, has sought the opinions of 20 insiders as to their thoughts on what will transpire in Garcia-Burgos.

A well-intended effort by the challenger quickly develops into a rout, with Garcia breaking him down just before the championship rounds.

Mikey Garcia TKO 10 Juan Carlos Burgos: It’s been called a dangerous fight. Don’t believe it. Mikey Garcia is smart enough to know what’s at stake in a bout that will test his pound-for-pound credentials.

He also knows not to underestimate Juan Carlos Burgos, who has a durable chin and is a better fighter than his record might indicate. He got a draw against Roman Martinez a year ago in a fight many thought he won.

Martinez scored a second-round knockdown of Garcia in November before Garcia stopped him in the eighth. Garcia got up to win with footwork, speed and accuracy. Martinez had no counter for that deadly mix. Neither will Burgos.

Mikey Garcia TKO10 Juan Carlos Burgos: Rapidly improving WBO super featherweight titlist Mikey Garcia has all the tools to be a top ten rated pound for pound fighter and I would argue that he's already there—with a bullet.

Juan Carlos Burgos is another quality opponent for Garcia to tactically take apart on his way to the recognition he quietly craves and clearly deserves. Look for Garcia to use Burgos' greatest strength (outside boxing skills) against him by out-boxing the boxer and forcing the mover into close quarter exchanges that will favor the superior fire-power of the defending champion.

It's been almost four years since anyone has gone the distance with him but even if Garcia is unable to checkmate Burgos into a stoppage, he'll have built up enough points to win a comfortable unanimous decision.

For Garcia, he needs to jab to the body and then time Burgos with a looping or a straight right hand. He can also use it to counter Burgos's wide lead left hook. Boom! I think that scenario is more likely. Garcia drops Burgos en route to a decision.

Garcia has been linked to some huge paydays down the road and I expect him to box a disciplined fight and protect his future.

Burgos will be hungry, after coming out on the short end of a draw against Roman Martinez, but I think he’s out of his league in this one.

However, if Garcia can get past the early rounds, he can turn the tables by exploiting Burgos' occasionally leaky defense. Garcia has the power and precision to get over the hump, especially once his motor is running at full speed.

He wants to wrap his hands against Mikey Garcia's belt and prove the naysayers wrong, but he'll likely get knocked out for his troubles. Garcia mowed down his 2013 competition with one spectacular finish after another.

His combination of timing and menacing power have spelled the demise for many of his foes. Burgos is no pushover, but he'll become knockout victim No. 29 late in this fight.

Garcia may take a minute to get on track as Burgos isn't the type of fighter that will waltz into his wheelhouse, but Burgos can't get away for 12 rounds.

Even though Burgos has solid defense, his lack of offensive pop means that Garcia will walk him down and ransack his body and face with power shots until Burgos can take no more.

Like Martinez, Burgos enters his fight against Garcia without a knockout loss on his record. That, too, will change.

Mikey Garcia TKO 10 Juan Carlos Burgos: Juan Carlos Burgos got the short end of the stick against Roman Martinez in his last high-profile fight. Now Burgos gets the man who shook off an early flash knockdown from Martinez en route to stopping the Puerto Rican.

Burgos is an underrated fighter who is good enough to win a belt at 130 pounds; unfortunately, he's up against a complete fighter in Mikey Garcia, who I feel will eventually counter-punch Burgos into submission late in the bout.

Mikey Garcia UD 12 Juan Carlos Burgos: Very good matchup. I look at this as a bout between two fighters of similar nature, long, rangy, patient, when they get a guy hurt, they finish.  I don't see a KO in this fight.

For a good five or six rounds this is going to be a chess match. Second half of the fight, they'll mix it up. Juan Carlos Burgos is hungry and a real warrior. He is, however, facing a guy who is just a little better in most departments.

I think that slight edge in talent is going to carry Mikey Garcia.  Somewhere in the last two or three rounds he'll hurt Burgos, and while Mikey won't be able to finish his opponent as he normally does, Garcia will carry the night by decision.

Burgos thought he won the title last year against Rocky Martinez. Most who saw the fight agreed with him. Garcia won his belt by knocking out Martinez a few months ago. He’s a crisp puncher-boxer.

Burgos is slower, but slightly taller. Garcia has more natural talent. I see Garcia stopping Burgos in round 11.

Unless I'm totally overrating Garcia, it will take a special fighter to defeat him. Burgos ain't it. Call it Garcia by late TKO.

That has to catch up to a fighter sometimes, and it seems it has Burgos. Garcia is a rising star, and there is no way he loses to a game, yet over-matched Burgos.

Mikey Garcia KO Juan Carlos Burgos:  I'm looking for Mikey Garcia to come through with a stoppage victory over Burgos in a good fight while it lasts. I really like Burgos, but Garcia is on a streak not to be derailed anytime soon.

Garcia is a splendid young fighter who will be a champion for a long time. I think his adherence to his style, mental toughness and superior power will lift him to victory.

It just might take a special talent to be able to defeat Garcia especially because he hasn't reached his prime yet. Most boxing pundits feel that Burgos clearly beat Roman Martinez depute the draw.

However, Garcia dominated Martinez and figures to be too skilled for Burgos. I look for Garcia to box his way to an easy decision or win by late stoppage.

He’s smart and patient, finding his opponents’ weaknesses, then exploiting them, and finally with tremendous punching power goes in for the kill.

I don’t know of any fighters his size that can handle that combination, Juan Carlos Burgos included. It could end even earlier.

By a shutout 20-to-0, the experts see Mikey Garcia having no problem defending his WBO junior lightweight belt against Juan Carlos Burgos.