Fans support Alvarez, Angulo at presser but will they buy the PPV? 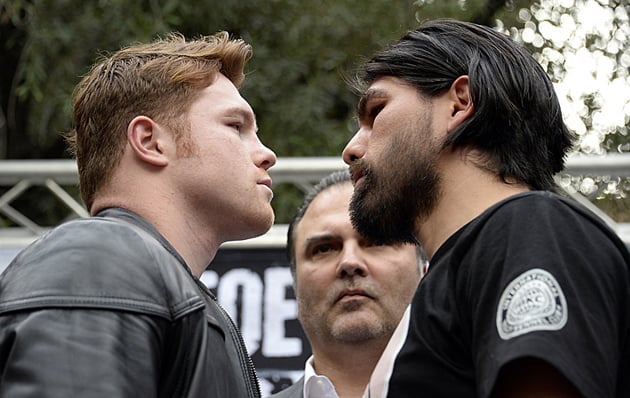 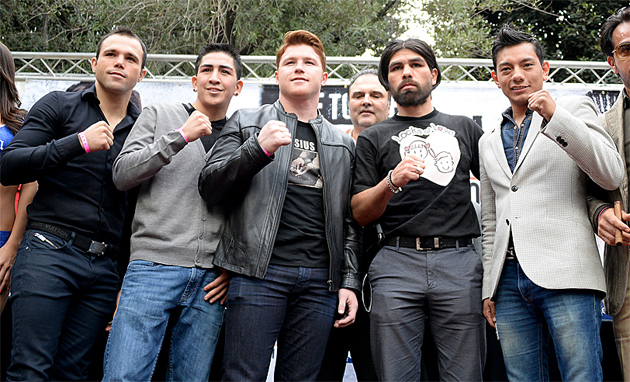 LOS ANGELES – Canelo Alvarez and Alfredo Angulo kept their comments brief and direct, as did the undercard fighters to their March 8 showdown, during the kick-off press conference for the Showtime PPV event that took place on Tuesday at the outdoor plaza of the downtown public library.

The two popular junior middleweights, Leo Santa Cruz and Cristian Mijares – who fight in the co-feature to the four-bout pay-per-view show at the MGM Grand in Las Vegas – and Canelo’s older brother, Ricardo Alvarez all basically said the same thing during their turns at the podium:

“I come to fight and I expect a good fight.”

The big question for Showtime and Golden Boy Promotions, which teamed up to make many quality cards last year, is can they expect enough pay-per-view buys to make the show a financial success.

If the fan turnout at Tuesday’s public media event and advance tickets sales are any indication, there’s a good chance that “Toe To Toe: Canelo vs. Angulo” (the official title of the pay-per-view show) will do solid business.

Golden Boy CEO Richard Schaefer announced that 6,000 tickets have already been sold. He expects the MGM Grand Garden Arena, which holds about 16,000 for boxing events, to be sold out well before fight week.

During the press conference a large group of Alvarez fans, many of whom were female, loudly chanted “Canelo,” which isn’t uncommon for the former junior middleweight champ who lost his 154-pound titles to Floyd Mayweather via unanimous decision in his last bout.

However, Angulo, who is also coming off a loss – a thrilling 10th-round stoppage to Erislandy Lara last June – also had a vocal group of supporters present at the press conference. They booed whenever Alvarez spoke and they barked whenever Angulo, nicknamed “El Perro” (Spanish for the “the Dog”), was at the mic.

This is good news for the promotion. Alvarez still has fans after laying an egg against Mayweather last September. He’s also got more haters than he had prior to the record-breaking “The One” pay-per-view event, while Angulo – the B-side to the March 8 show – clearly has his fans.

The Guadalajara native said he wants to give those fans a better fight than he produced against Mayweather, who dominated him in a tactical chess match. He couldn’t have picked a better opponent than Angulo, a pure pressure fighter with a debilitating body attack and a hard left hook – the punch that floored Lara twice during their fight.

If Angulo can make for a compelling fight against Lara, a former Cuban amateur star who has been in his share of stinkers, he should be able help Alvarez rekindle the excitement.

“Why fight Alfredo Angulo?” Alvarez asked rhetorically, “Because he’s a good fighter and a strong fighter who comes forward. He can take a punch and he can give a punch.”

Angulo (22-3, 18 KOs), a 31-year-old Mexicali native who represented Mexico in the 2004 Olympics, is arguably the biggest offensive threat that Alvarez has ever faced.

Alvarez has faced strong fighters, such as Shane Mosley and Carlos Baldomir, but unlike those former champs, Angulo is still in his athletic prime. Alvarez has faced big fighters, such as Kermit Cintron and Austin Trout, but unlike those tall and rangy boxers who elected to operate from a distance, Angulo will physically impose himself on the young Mexican star from the opening bell.

That’s just what he does. Angulo says his rugged pressure fighting style is the reason he continues to have fans despite the setbacks he's suffered, such as the Lara fight or his 2011 stoppage loss to James Kirkland.

“I’m the same Alfredo Angulo,” he said. “That’s what I do in every fight. I’ve earned my respect with my fights and the way I fight.”

Angulo’s trainer, Virgil Hunter, had the most to say about the matchup.

“I think the fight will come down to what each fighter did in his last fight,” Hunter said. “Their last fight says a lot about each man.

“Alfredo had Erislandy Lara. He had him, but he had an unfortunate accident with getting a thumb in his eye. Canelo has implied that Floyd Mayweather ran from him.

“Well, Erislandy Lara is known to move around a lot and Alfredo Angulo employed a strategy that dealt with it, and he gave Lara the worst beating in the Cuban’s career.

“Saul should have employed a strategy to deal with what Floyd gave him. But in this fight, there will be no running.”

“Each man has to sleep at night wondering why he lost his last bout and each has to decide what he’s going to do in his next bout.”

On March 8, boxing fans will have to decide if Alvarez-Angulo is worth paying for. 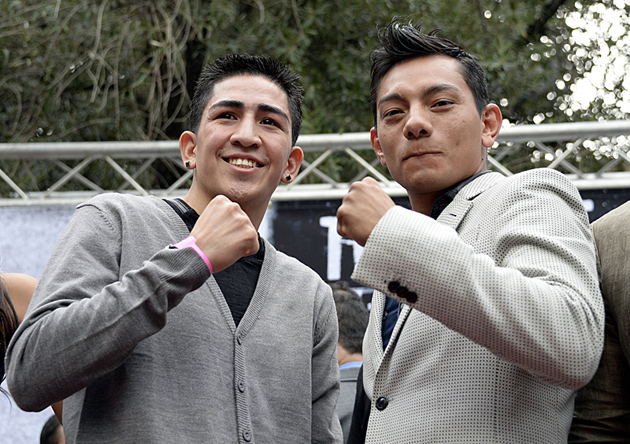 Carlos Molina (22-5-2, 6 KOs), a Chicago-based native of Michoacan, Mexico, will defend his IBF junior middleweight title against undefeated  prospect Jermall Charlo (17-0, 13 KOs) in the opening bout of the pay-per-view broadcast.

In the second bout of the card, Ricardo Alvarez will take on unbeaten WBC lightweight betlholder Omar Figueroa, a 23-year-old Mexican-American slugger whose popularity is growing in his native Texas.

Many fans and ringsiders thought Alvarez (23-2-3, 14 KOs) was lucky to get a majority decision over Rod Salka in his last bout on Dec. 14. However, Salka is a crafty and mobile boxer with a good jab. Figueroa (22-0-1, 17 KOs) is a decent boxer but he’d much rather fight, so Alvarez, who likes to walk his opponents down, won’t have to look for “Panterita.”

To get an idea of Figueroa’s appetite for violence all one needs to do is watch his brutal 12-round war with Nihito Arakawa, which earned him the WBC’s interim belt last July. It remains to be seen if Alvarez is as tough as the Japanese veteran, who will take on talented Jorge Linares in a 10-round “freeview” preceding the pay-per-view card.

In the co-featured bout, Santa Cruz will attempt to defend his WBC junior featherweight title against Mijares, a skilled but gutsy Mexican veteran and former 115-pound beltholder.

Santa Cruz (26-0-1, 15 KOs) is a Mexican-American from Los Angeles but the 25-year-old two-division titleholder has a Mexican fighting style and he’s more comfortable speaking Spanish than English.

Mijares (49-7-2, 22 KOs), a 32-year-old southpaw from Durango, is 14-1 in his last 15 bouts, which includes a decision over Alberto Rojas for the IBF 115-pound title and a ninth-round TKO of former 122-pound champ Rafael Marquez in a featherweight bout. The lone loss in that 15-bout stretch was a split decision to Victor Terrazas, who Santa Cruz crushed in three rounds last August to win the WBC 122-pound belt.

“I’m happy to be in the co-featured bout of such a big card,” Mijares said. “I know Leo Santa Cruz is a good fighter, so I’m motivated for this fight. It’s going to be a war.”

Although Mijares is a smart and savvy boxer, he’s been in his share of tough fights against the best fighters of three weight classes (junior bantamweight, bantamweight and junior featherweight). He’s lost to Vic Darchinyan and Nehomar Cermeno (twice); and he’s scored victories over Jorge Arce, Alexander Munoz, Katsushige Kawashima (twice), Chatchai Saskul and Tomas Rojas.

Mijares also owns a 2008 split decision over former junior bantamweight contender and title challenger Jose Navarro. Santa Cruz, a 19-year-old prospect with only five pro bouts under his belt at the time, sparred with Navarro to help the 2000 U.S. Olympian prepare for Mijares.

“I’ve known about Miarjes ever since the Navarro fight,” Santa Cruz said. “I’ve watched him fight over the years and I know he’s a great fighter.”