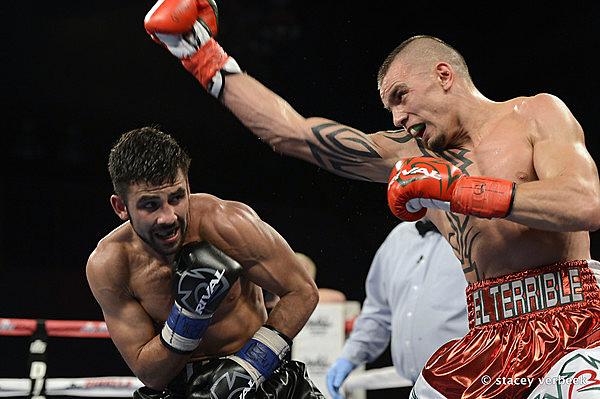 If you read the press clippings leading up to the fight, you’d have thought Ivan Redkach-Tony Luis was an absolute mismatch.

If you just read the scorecards after the fight, you might have thought the same.

But despite the lopsided scores of 99-90, 97-92, 97-93 in favor of Redkach, Tony Luis gave him all he could handle in the main event of ShoBox: The New Generation on Friday night from the Cook Convention Center in Memphis, Tenn.

Redkach (16-0, 13 knockouts) came out looking to live up to the predictions, storming at Luis from the opening bell. However, it was Luis who clipped him with a left hook that sent him off balance and seemed to send his glove down to the canvas. Referee Randy Phillips set the tone for what would be a bizarre 10 rounds of officiating, ignoring it completely and letting the fight continue. Seconds later, Luis appeared to slip on the canvas following a grazing blow, and it was ruled a knockdown.

Luis (17-2, 7 KOs) maintained steady pressure throughout the night. With a substantial height and reach advantage, his best chance was to swarm Redkach, and that was exactly the plan he employed. Predictably, Redkach’s power and accuracy kept the Ukrainian in control when the fight was at range and in the center of the ring, but Luis spent plenty of time along the ropes with his head buried and arms wailing away downstairs as well.

Unfortunately, Phillips wasn’t very fond of any work in close, and seemingly separated the fighters for no reason, repeatedly. The grand irony is that Phillips spent the entire fight standing dangerously close to both fighters, but of course there was nobody to push him back.

Redkach did show flashes of the power he was reported to have, buzzing Luis on a number of occasions, particularly with hard right hooks. Still, Luis, 26, Cornwall, Ont., was able to stomp forward and even land the more telling blows in the final round.

Though he didn’t turn in the thrashing expected of him, the 27-year old Redkach kept a high stock by both maintaining his unblemished record, and taking part in an action fight. On the flip side, Luis, who was written off after a shocking upset loss to Jose Hernandez a year ago on ESPN, likely earned himself more time on the tube as well.

As exciting as the main event was, it was the de facto co-feature that stole the show, as Frank Galarza scored a chilling 2nd round knockout over John Thompson.

Immediately as the bell rang to begin the second, Galarza stormed Thompson and beat his left hook with a well-timed right hand. The shot staggered Thompson (14-1, 5 KOs), and Galarza followed it up with a monstrous left hook that sent him corkscrewing face-first into the canvas. With his forehead buried into the canvas and his body like a pretzel beneath him, the count was administered until the eight, when it was finally waved off.

Galarza (12-0, 8 KOs) is a late bloomer at the age of 28, but appears to have significant power at 154, and is being handled by AJ Galante, who has recently guided the career of light middleweight contender Delvin Rodriguez.

Earlier in the night, Antoine Douglas hit Marquis Davis with an avalanche of punches en route to a lopsided unanimous decision. Scores were 79-73 and 80-72 twice.

Douglas (12-0, 7 KOs) is a Virginia-born prospect with plenty of hype, having fought on a number of east coast undercards. He lived up to the promise in terms of his punch output, overwhelming Davis in all eight rounds with almost exclusively power shots.

That said, Davis (8-1-2, 5 KOs) was able to take all of them and remain on his feet for the duration of the fight. Whether that was a testament to his chin, or evidence that Douglas’ power has been overstated remains to be seen as “Action” continues his rise up the ranks.

In the broadcast opener, welterweight prospects Maurice Hooker and Abel Ramos fought to a majority draw. Scores were 77-75 Hooker and 76-76 even twice.

Hooker (12-0-2, 9 KOs) used his spindly frame to remain on the outside and out-jab Ramos handily for the first two rounds, to the point that it looked like a stylistic mismatch. However, Ramos showed flashes of hope trapping his foe on the ropes in the third round, before Hooker regained control in the 4th.

After a competitive fifth frame, Hooker seemingly began to tire, as perhaps Ramos’ constant pressure began to take its toll.

Ramos (8-0-1, 4 KOs) banged away to the body and landed looping rights and lefts to the head with more and more regularity down the stretch. Without looking at the scorecards, one can safely assume that the unheralded Arizona brawler unanimously won the second half of the fight.

Though the lasting impression will be that Ramos was coming on and might have had more left in the tank at the final bell, the fight was also a good gut check for Hooker, who had been able to safely tee off on safe opposition thus far.