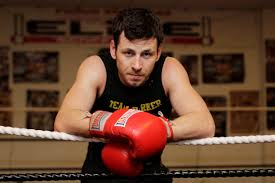 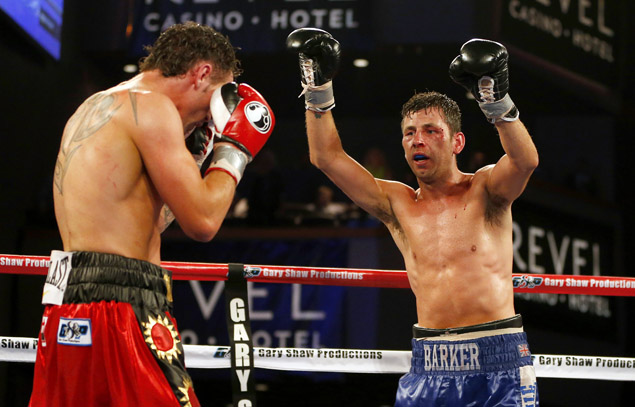 A professional fighter dreads being told that his career is over. The routine, the camaraderie, the ecstasy of winning and the glory suddenly vanishes and the reality of life without boxing hits harder than any opponent ever could.

But it was different for Darren Barker.

When the immensely popular Londoner realized his dreams, by relieving the IBF middleweight title from Daniel Geale, in August last year, he reached the pinnacle of a lifetime, athletically and emotionally.

The pressure of winning the ultimate prize, in memory of his late brother, was replaced by euphoria, as Barker collapsed to the canvas in tears the instant Michael Buffer confirmed his split decision victory in Atlantic City.

It was as moving a scene as boxing has produced in years.

A lucrative title defense against Felix Sturm, in Stuttgart, was next but suddenly the well was dry. Barker, who had operations on both hips during his career, experienced niggles in training and it all fell apart on a cruel December fight night.

Sturm was exceptional and posted a second-round stoppage but Barker, who struggled to compete, was distressed by more than his opponent’s sustained assault.

“I knew retirement was approaching,” said Barker. “Ultimately my body wasn’t holding up in training camp and it was time to call it a day. If you can’t train 100 percent at world level then you can’t afford to get in the ring – this is the hurt business.

“I don’t feel cheated that I’ve had to retire through injury. I won British, Commonwealth, European and world titles and have so much to be proud of. I’m able to look back on my career and savor the Daniel Geale win for the rest of my life.”

It takes a special individual to reach the top in boxing, but what makes Barker more exceptional is that he vowed to win a world title in honor of his younger brother Gary, who tragically passed away in 2006 following a car accident.

“At times I put myself under real pressure,” said Barker. “Still when the moment came, against Geale, it spurred me on and nothing was stopping me that night. I dedicated the win to my brother because that was all we ever talked about as amateurs. The dream was that one, or both of us, would win a world title.”

The boxing community, particularly in the UK, stood as one when Barker triumphed because his backstory with personal tragedy and multiple operations was so well known. To emerge victorious through all of that adversity was remarkable and the jubilation ran deep.

“To see the smiles on the faces of my friends and family was such a great feeling,” said Barker with a hint of real emotion. “I achieved my goal of winning a world title, but now I’m out of the sport with my health intact and that’s also very important.”

This reporter then asked Barker what was the one attribute that he required above all else.

“My will to win,” said the 31 year old instantly. “I proved myself against Daniel Geale, when I got up from the body shot in round six. I was never the most naturally gifted fighter, whereas my brother put the gloves on and it was like he’d been boxing for years.”

One naturally gifted fighter who will always stand out when reviewing Barker’s resume is THE RING middleweight champion Sergio “Maravilla” Martinez.

“He was the best,” said Barker. “Felix Sturm and Daniel Geale were quality fighters, but I’ve never came up against anyone with Sergio’s speed. He turned the screw at the midway point and it was the first time I came across a fighter with that level of experience.

“I still think he was shocked at how good my performance was though and I was a big underdog going in. Before that fight Sergio had the same unbeatable aura which Gennady Golovkin has now and afterwards everyone wanted to fight him, which shows I had success.

Barker continued, “When I look back at the fight I’m a bit disappointed because I didn’t believe in myself enough. If my mindset was right I honestly think I could have beaten Sergio, but he was simply better on the night. Since my retirement he’s sent me some lovely messages and it’s nice to be able to call him a friend.”

When Barker was asked what he thought about a potential showdown between Martinez and Golovkin his answer was a mixture of respect for a former foe and trepidation.

“Nothing would surprise me with Sergio because he’s a great fighter,” said Barker. “That said he could be there for the taking now, because he’s had a lot of tough fights and is getting on in years. Golovkin is on the way up and looks sensational.”

Barker will relax with family for the moment but British fans are likely to see him behind the mic in the near future. He has previously appeared as an analyst and that is the area the former world titlist seems eager to build on.

“Getting in front of a camera and talking about boxing is definitely easier than taking part,” said Barker. “I do want to remain within the sport in some capacity and hopefully my opinions and insight will be valuable to the fans.”

Barker’s popularity has been earned through the course of a ten year professional career. The modern era has produced more than one glorified prima donna at world level but this British star’s integrity and likeability were hallmarks of one very unique package.

“I’d like to thank all the fans for travelling the country, and the world, to support me,” said Barker. “There was no better buzz than hearing the home faithful cheer me on and shout my name. That is something that I will definitely miss.

“Also my trainer Tony Simms who was both a mentor and a friend to me. He’s seen me in some really bad places and dug me out of them. Without Tony I couldn’t have done it and I’m so glad that I have a friend for life.

“The same applies to everyone at Matchroom Promotions. They took my career to another level and Eddie (Hearn) got me the fight that helped me fulfill a dream. I won’t forget that.”

The most important people in “Dazzling” Dal’s life are his fiancé and three year old daughter and like any satisfied fighter, who hangs up the gloves, Barker is eager to replace grueling training camps with the comforts of home.

“My fiancé is over the moon,” said Barker. “She’s getting Happy Darren back, because I could be such a miserable sod when I was training for a fight. My family means the world to me and without them none of this would have been possible.”

“I’ll be spending quality time with them.”