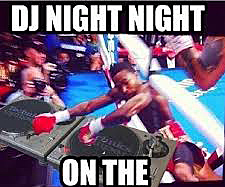 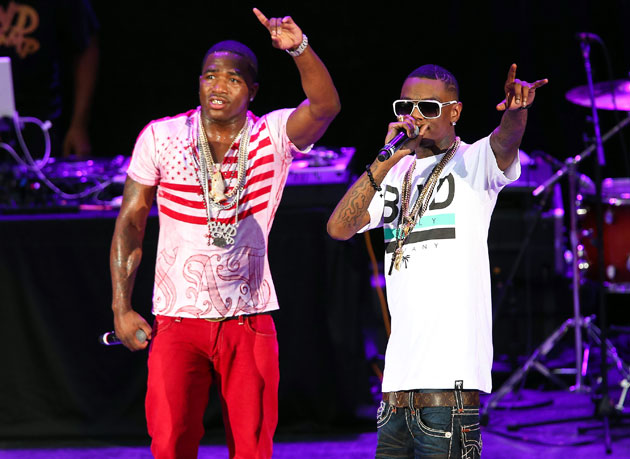 Three-division titleholder and part-time rapper Adrien Broner is joined on stage with Soulja Boy during the 2013 America’s Most Wanted Musical Festival. Since suffering his first loss, one of his rapper peers has taken a verbal jab at him in song.

It was bad enough that Adrien Broner couldn’t open up a Facebook account for weeks without being inundated by the deluge of memes that ridiculed the brash young fighter’s loss to Marcos Maidana last month.

But when Grammy-nominated rapper Fabolous immortalized the lowest moment of his career in a newly released song “The Hope,” the former three-division titleholder Broner was sent over the edge.

Fabolous, whose real name is John David Jackson (not to be confused with the former junior middleweight/middleweight titleholder), spit the line “N____s looking washed up, it’s something in the soap/You looking like Adrien Broner in the ropes.” The song is featured on the mixtape The Soul Tape 3 and features rapper Jadakiss.

The 23-year-old Broner, who has recorded rap songs of his own with artists like Soulja Boy and Meek Mill, took umbrage to the diss track, tweeting “@myfabolouslife n___a had a bad night and you jumped ship smh my n___a I thought you watched my fight to see me win……”

Broner has since deleted the tweet, but the song will live on forever. The insult is just the latest in a long tradition of intertwining hip hop music with boxing. It makes sense, as both art forms thrive in similarly gritty environments.

Hip hop can elevate a boxer, just as it did when LL Cool J’s “Mama Said Knock You Out” glamorized the sport in his 1990 song, or it can be used as a vehicle to kick a fighter when he’s down.

Below is a look at some of the more notable songs where lines were crossed between rappers and boxers.

In a bizarre twist, Mayweather and Ross seem to be friendly today, with Ross having teamed up with Mayweather to insult 50 Cent on Twitter following the dissolution of Mayweather’s friendship with him.

Ryan Songalia is the sports editor of Rappler, a member of the Boxing Writers Association of America (BWAA) and a contributor to The Ring magazine. He can be reached at [email protected]. An archive of his work can be found at http://www.ryansongalia.com. Follow him on Twitter: @RyanSongalia.