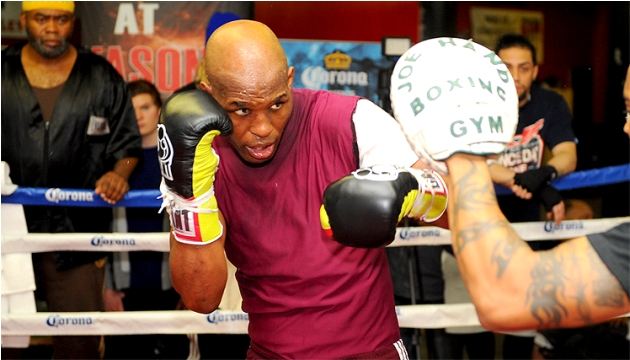 On Monday, Bernard Hopkins was on his way to a workout, even as the IBF light heavyweight beltholder was counting down the remaining hours to his 49th birthday.

Already the oldest man to win a significant crown, Hopkins, a day earlier, was continuing his race against Father Time, literally doing so on foot.

"I trained yesterday, on a Sunday, meaning that I did some running," said Hopkins (54-6-2, 32 knockouts). "I did what I had to do, not boxing training. But I'm on my way to the gym right now. It's a thing were I just have to keep my body going."

Hopkins is coming off a unanimous decision route in October against Karo Murat in defense of the IBF belt he won by unanimous decision over previously unbeaten Tavoris Cloud in March. Hopkins first set the record at the age of 46 by outpointing Jean Pascal for the WBC’s title in May of 2011 before being dethroned following a majority decision loss to Chad Dawson in May of 2012.

"I want to show the people that I can do it again, this year," said Hopkins, "providing the fights can be made."

Hopkins' targets include WBA beltholder Beibut Shumenov, whom he could face as early as March or April, followed by the winner between hard-hitting counterparts RING and WBC champion Adonis Stevenson and WBO beltholder Sergey Kovalev.

"The question is, 'Can any of these guys overcome what Bernard Hopkins has accomplished over the years, and stop me from proving that age is just a number to me?'" said Hopkins, a former undisputed middleweight champion with a division record 20 defenses. "I know that I already have a lot of history behind me, and a lot of legendary accomplishments behind me, and I know that I bring a lot to the table as far as pay days for these guys."

But Hopkins knows that time may be running out on his chase to unify the 175-pound division before January of 2015 when he turns 50. That's because HBO has severed ties with Golden Boy, the promoter of Hopkins and Shumenov, who now fight on Showtime. Stevenson and Kovalev are aligned with HBO, which is Showtime's network rival.

"I understand that certain things couldn't happen in the past because of promoters and managers, and now, it's because of networks," said Hopkins. "But I want to unify the lightweight division, like I did the middleweight division, and bring clarity to the light heavyweight division. That would be my, as you say, sort of my birthday wish. That, to me, would be a birthday wish that I would love to be able to address the most in my boxing life right now."