Manager: Sergey Kovalev ‘is not a racist’ 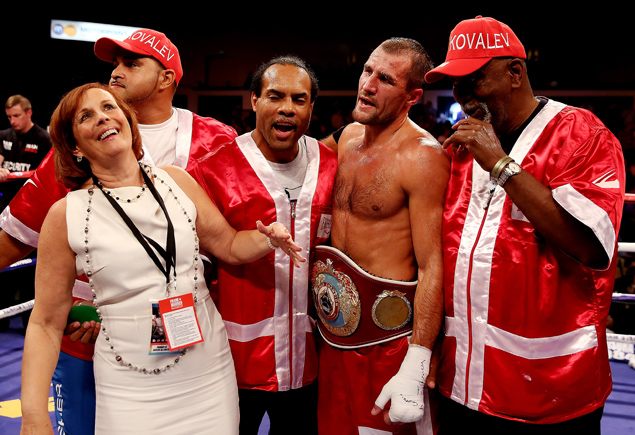 Egis Klimas, manager of WBO light heavyweight beltholder Sergey Kovalev, told RingTV.com on Friday that his fighter did not mean to malign African American boxers in a recent interview on the Russian website Allboxing, which has has become the subject of a brewing controversy.

Klimas said the word "Negro," which the undefeated puncher used during the Russian-language interview, is still used where Kovalev grew up in Russia "for black people." Klimas said that Kovalev's reference to "dark-skinned people" was an attempt to communicate that, and that it should not be interpreted negatively toward African Americans.

"We still use today in Russia, for black people, the word 'Negro,' Klimas said. "So they are trying to make him out to be a racist because of that reference to black people. In the interview, he used the word Negro for black persons. And then, he tried to be polite and to explain it by saying 'dark-skinned people.

"That's what he meant. But some stupid reporters are trying to use that information to make Sergey look bad. He is not a racist. He is a nice person and I hate to have to explain that every time that I talk to a member of the media."

Currently a resident of Fort Lauderdale, Fla., where he is trained by former middleweight titleholder John David Jackson, an African American, Kovalev said Klimas' explanation "about me is really true." In addition to Jackson, Kovalev had worked with Don Turner, who once handled Evander Holyfield.

During an interview with BoxingScene.com, Klimas contends that Kovalev, 30, is from a hard scrabble area of Chelaybinsk, Russia, and that the fighter has had to defend his comments to officials from HBO.

"Regarding the racist claims over him. That’s a farce. Being raised in one of the toughest districts of one of the roughest Russian cities, actually in a ghetto [of sorts], he has a very arrowy tongue. Some of (his) translations – not fully correct, by the way – have been brought [by some people who have an ongoing conflict with Sergey] to the attention of the HBO crew," said Klimas, according to BoxingScene.com.

"They asked me directly if Sergey is a racist. I told them to discuss it with Sergey’s friends Don Turner and John David Jackson and to ask them if he is a racist or not… I have recently seen his new album – a number of photos there – as they went into one of Florida orphanages with gifts to all these homeless, sick, lonely kids. He was standing there with all of these black kids, hugging and jumping all over him, with a great smile on his face… Now tell me if he is a racist or not."

Kovalev (23-0-1, 21 knockouts) is 11-0-1 with 11 stoppage victories in his past 12 bouts and is coming off a second-round stoppage of Ukrainian challenger Ismayl Sillakh.

Kovalev-Sillakh was televised on HBO from The Pepsi Colesium in Quebec City, Quebec, Canada on the undercard of a sixth-round knockout by RING and WBC 175-pound champion Adonis "Superman" Stevenson (23-1, 20 KOs) over Tony Bellew of Liverpool.

Like Beibut Shumenov (14-1, 9 KOs), of Kazakhstan, owner of the WBA's title, Kovalev wants to unify the light heavyweight division. Shumenov is seeking a bout against IBF counterpart Bernard Hopkins (54-6-2, 32 KOs) who is Shumenov's promotional stablemate with Golden Boy.

"I need to get three more titles. That is my dream," said Kovalev. "I feel that I have to have more responsibility. I have to be more responsible as the champion to the people who support me and myself, too."

Given that Stevenson and Hopkins are African American, Kovalev appears to realize that the controversy is not likely to go away any time soon, even though his manager hopes that it does.

"Sergey is not a racist. He is the nicest person," said Klimas. "He is not a racist person, and I don't want to talk about it anymore, and you can put that in the paper."