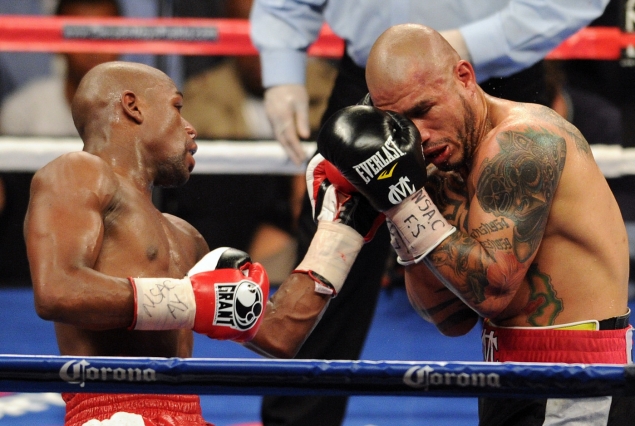 Floyd Mayweather Jr. has dismissed rumors of a September date with Manny Pacquiao.

The pound-for-pound king's opponent for May 3 has yet to be announced, although former two-belt 140-pound titleholder Amir Khan claims to have signed his part of an agreement to challenge for Mayweather's RING and WBC welterweight titles on that date.

Mayweather (45-0, 26 knockouts) said during an earlier interview that a bout with Pacquiao (55-5-2, 38 KOs) "won't happen" because the eight-division titlewinner is promoted by Golden Boy rival Top Rank.

Mayweather vehemently dismissed the lastest speculation concerning Pacquiao, which originated from a home made video on Youtube, during an interview with FightHype.com.

"All the stories you hear about Pacquiao is a lie," said Mayweather. "It's a lie. It's not true. If it didn't come from Leonard's mouth, my mouth, or Al's mouth, it's not true."

Khan announced on Monday during an interview with Yahoo!Maktoob that he had signed to face Mayweather, doing so amid wide speculation that final details are close to being completed for Mayweather to face him at either The MGM Grand in Las Vegas or else at Barclays Center in Brooklyn.

Although he made his case for a bout with Mayweather, Maidana's manager, Sebastian Contursi, said "We've not talked about any of this, and I've not talked to Richard about the Mayweather fight."

Last month, Maidana won his fourth straight fight during a run that has included three knockouts with a unanimous decision that dethroned three-division beltwinner Adrien "The Problem" Brone (27-1, 22 KOs) as WBA welterweight titleholder.

In his last fight in September, Mayweather dethroned Canel Alvarez by majority decision for the RING and WBC 154-pound championships. Mayweather-Alvarez, promoted by Golden Boy, grossed a record $150 million.

Mayweather announced on his Twitter account  that he bet $50,000 on Michigan State to defeat Stanford in Wednesday's New Year's Day Rose Bowl, which the Spartans did by the score of 24-20.